Laws regarding Hate Speeches in India and world

Recently Sudarshan News, a Hindi news-channel announced the telecast of a TV show with its Editor-in-Chief Suresh Chavhanke, claiming to have done an expose of alleged infiltration of the Muslim community into Civil Services and also termed it as ‘Bureaucracy Jihad’. Certain sections of the society have termed this program as a case of hate speech. The Students of Jamia Millia Islamia university approached the Delhi High Court, which issued a stay on the telecast of the Programme.

Sudarshan News telecasting a program about Muslims infiltrating the Civil Services has once again ignited the debate on Hate Speech. Meanwhile, the government of India also issued a show cause notice to Sudarshan TV under the Cable Television Network Act.

While one side of the argument in this case is that the contents of the program fall under hate speech targeting a particular community, there are others who feel that a prior restraint on the telecast of this program is a violation of the free speech rights. The Supreme Court is set to hear this issue again on 05 October 2020.

As the Supreme Court discusses this issue, we take a look at laws and regulation regarding hate speech in India, along with the regulations internationally.

Constitution provides for reasonable restriction on Right to Freedom of Speech

Article 19(1)(a) of the Constitution of India guarantees the ‘Right to Freedom of Speech and Expression’ to all its citizens.  While the constitution does not permit any arbitrary restrictions on freedom of speech, there are certain reasonable restrictions or limitations on free speech the details of which are mentioned in Article 19(2).

It provides for the following three important things that ought to be considered before imposing any restrictions on Freedom of speech:

While no law in India defines ‘Hate Speech’, there are certain legal provisions and legislations that prohibit select forms of speech as exceptions to freedom of speech. 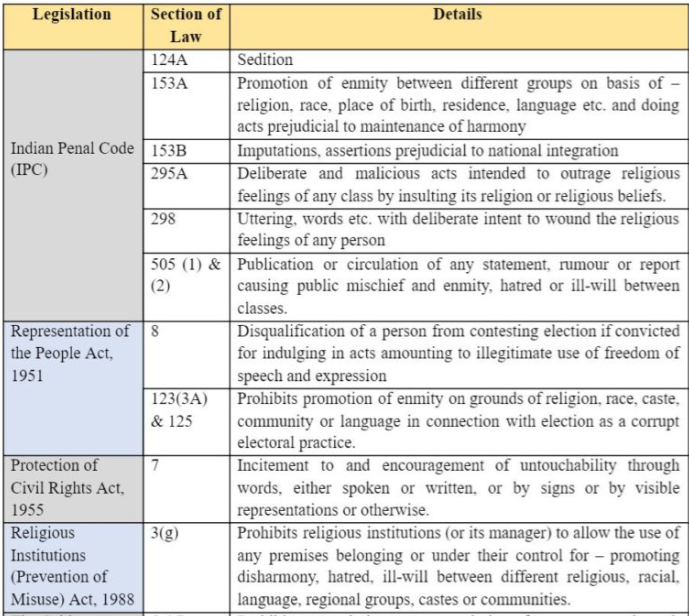 The Law Commission of India in its Report on Hate Speech has identified criteria that can be used to determine Hate speech based on summarizing the different State jurisdictions:

In order to identify hate speech, recognize differentiate and control it, various countries are party to various international conventions or have evolved laws in the respective countries: 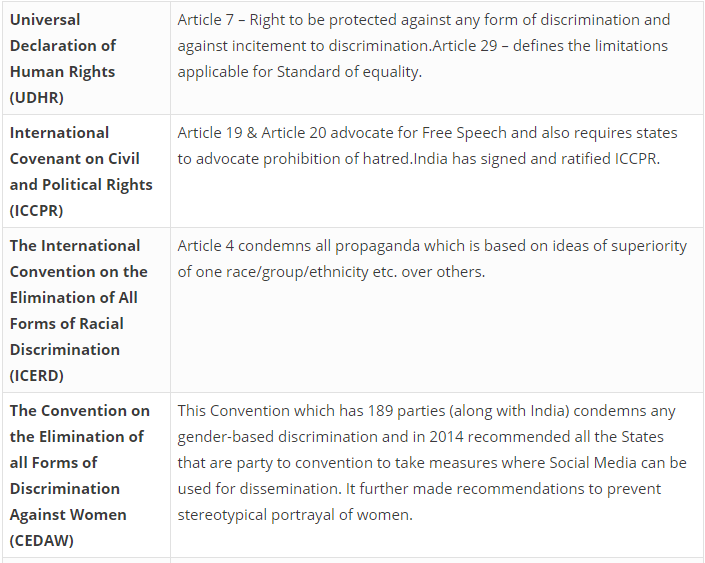 In many countries including India, the challenge with codification of Hate Speech is to balance it with right to the Freedom of Expression that is guaranteed to its citizens. It is also important to ensure that the freedom is not put to indiscriminate use, especially by those who are powerful and thereby compromising and infringing on the rights of the disadvantaged communities. Let’s see in coming verdict, what SC says.

The RBI has recently come out with a document titled as "Technology Vision for Cyber Security for Urban Cooperative Banks (UCBs) 2020-23". This vision document aims at enhancing cyber security of the UCBs.

To accomplish the Vision, the Mission is established with following action points: 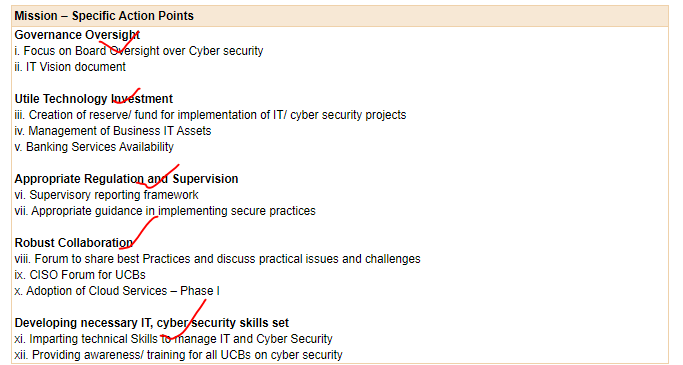 The implementation of the approach outlined in this Technology Vision document will strengthen the cyber resilience of the Urban Co-operative Banks.

According to some of the estimates, In the last 5 years, the Urban cooperative banks have reported nearly 1000 cases of fraud worth more than Rs 220 crores. This failure of the UCBs is attributed to mainly two reasons:

A subjective topic. This topic of Regional Transit System is important form the perspective of GS 1 mains syllabus: Urbanization, their problems and their remedies.

The first look of Regional Rapid Transit System (RRTS) trains was unveiled. The state-of-the-art RRTS rolling stock will be the first-of-its-kind in the country with a design speed of 180 kmph, said the National Capital Region Transport Corporation (NCRTC).

The entire rolling stock for the 82-km-long Delhi-Ghaziabad-Meerut RRTS corridor, the first such corridor being implemented in India aimed to bring down travel time between Delhi and Meerut to an hour (one-third of the 3-4 hours taken by road), will be manufactured at Bombardier’s Savli plant in Gujarat.

So, in this regard we will understand the RTS, its need and the benefits derived from it. What is Rapid Transit System?

Why do we need RRTS?

The National Capital Region (NCR) has grown over the years to cover parts of states around Delhi namely, Haryana, Uttar Pradesh and Rajasthan. Today the total area which falls under NCR is about 55,083 km2 with the total population of over 46 million (4.6 crores) (Census 2011). The region has seen a decadal population growth of ~24% between 2001 and 2011. Entire NCR is an urban agglomeration with an urbanization of about 62%.

Further, in 2007, the number of Passenger vehicles crossing Delhi borders breached 1,100,000 (Eleven Lakhs) per day. This has triggered the need to have effective regional public transport system on a priority.

So, if you consider the Urban areas, the problems faced by the residents are:

What are the benefits?

RRTS has capacity to ferry a larger number of people per hour. RRTS, which could shift a large amount of traffic from road to rail could free up a lot of road space and ease congestion on highways across the NCR.

Dams affecting the gene flow of golden mahseer in the Himalayas

Scientists have found close genetic relationships between populations of the golden mahseer, an iconic freshwater fish in Indian rivers Bhagirathi and Ganga, while significant genetic differentiation was observed between Alaknanda and Yamuna populations.

In the study, conducted by scientists from the Wildlife Institute of India, the authors proposed establishing a microscale protected area near breeding sites of golden mahseer and the construction of a fish pass in dams to allow dispersal of golden mahseer and maintain genetic connectivity.

The golden mahseer (Tor putitora), known for their striking golden hues, are large-bodied fish that have reached weights greater than 50 kg and lengths of over 200 centimetres. Consequently, they are popular as sport fish. Found in cold-water habitats of the Himalayan region, the presence of the endangered golden mahseer, a flagship species, indicates healthy freshwater ecosystems. The fish is very sensitive to change in water temperature; therefore, small climatic fluctuation may lead to a change in its genetic structure. 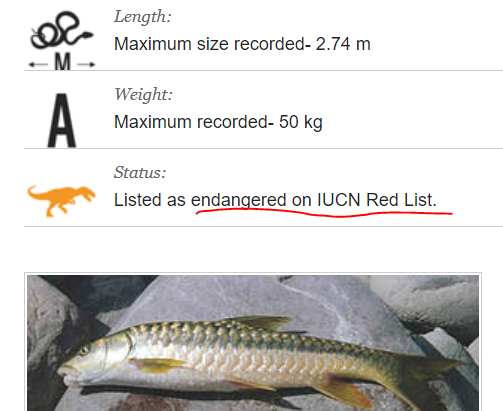 Golden mahseer is “naturally distributed” throughout the rivers (and associated reservoirs) of the south Himalayan drainage (the Indus, Ganges-Yamuna and Brahmaputra) from Pakistan (also unverified reports from Afghanistan) in the west to Myanmar in the east. Records are also available from several river systems and associated reservoirs in the Mahanadi (previously recorded as Tor mosal mahanadicus) and the Krishna (as a consequence of captive breeding and stocking from hatcheries) located south of the Himalayan landscape.

What is the problem?

Dams and barrages across rivers disrupt ‘longitudinal connectivity’ or the free flow of water, sediment, and organisms. These barriers limit the dispersal of species and create isolated microhabitats. Previous studies have shown that the barrier effect caused by Tehri dam, located at the confluence of Bhagirathi and Bhilangana, has resulted in a decline in the populations of mahseer upstream of Bhagirathi river. A citizen’s report, ‘Rejuvenating Ganga released in 2019 claimed that the Ganga is being “bled at almost 1000 diversion points” in its basin. And still more diversionary proposals are on the drawing boards. Two major dams, at Tehri and Koteshwar, have been constructed across the Bhagirathi, whereas the Srinagar dam is constructed across the Alaknanda in Uttarakhand. 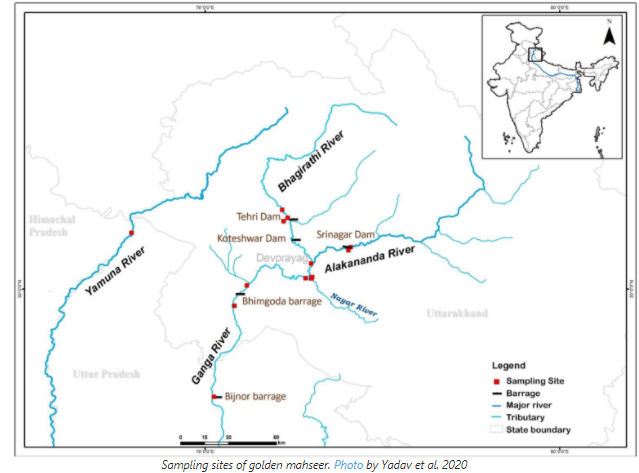 This movement due to the availability of high-water levels in the upper region of Tehri dam across the Bhagirathi that replenishes the major golden mahseer stock in the Ganga river.

Suggestions:
As the study found evidence of unidirectional gene flow of fish populations from the Bhagirathi to the Ganga and a low migration rate from Alaknanda to the Ganga, the authors call for the creation of ‘fish passes’ to maintain genetic connectivity of aquatic species in Himalayan rivers. Such passes would facilitate more fish to migrate towards the Ganga and also back upstream, enhancing genetic diversity. Also known as fishways, fish passes are structures built on or around dams or weirs that allow fish to migrate past the obstruction. They “play a pivotal role in enabling aquatic fauna to overcome obstacles blocking their inter and intra-river journeys,

Pusa Agricultural Institute has developed a new and innovative bio-decomposer technique of converting crop stubble into compost, which is deemed a cost-effective way to deal with air pollution caused due to crop stubble burning.

The technology, called ‘Pusa Decomposer’, involves making a liquid formulation using decomposer capsules and readily available inputs (jaggery and chickpea flour), fermenting it over 8-10 days and then spraying the mixture on fields with crop stubble to ensure speedy bio-decomposition of the stubble.

Delhi and many other North Indian States are covered with smoke due to stubble burning in the neighbouring States by the farmers. Bio-decomposer technique (‘Pusa Decomposer’) can become a practical solution to the problem.

The cost of the capsule is very less. It is simple, doable and practical technique to stop stubble burning.