Latest report on Fluorosis in India

Fluoride is beneficial to humans when consumed at optimum levels as it helps prevent dental caries. However, exposure to fluoride in high concentrations frequently results in damage to the bones and teeth of humans. 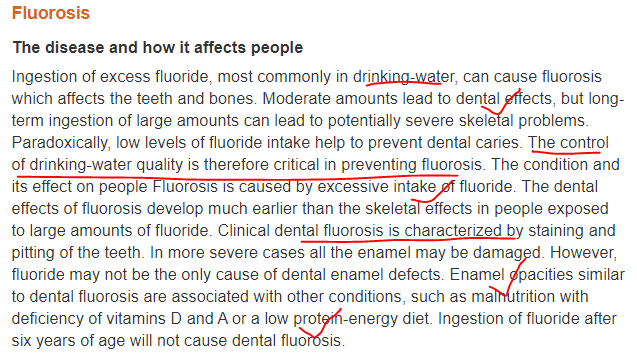 Both natural and human activities release fluoride into the atmosphere 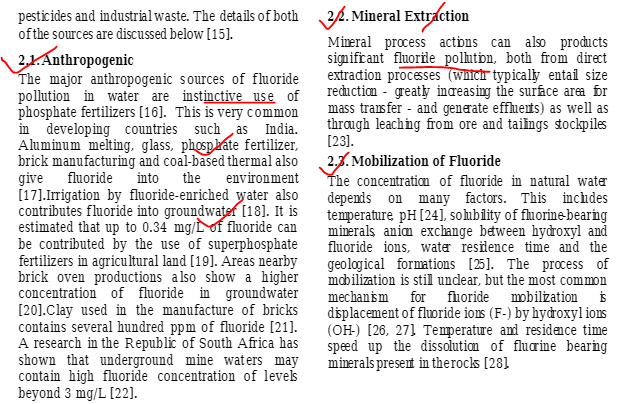 Naturally, weathering of rocks rich in Fluoride ends up in the groundwater, mainly in arid and semi-arid regions. At the foot of high mountains and in areas where the sea has made geological deposits, the concentration of Fluoride is generally higher. Apart from this, emission of fly ash and use of phosphate containing fertilizers which also end up in water sources result in contamination of the water bodies. Other industrial activities such as cement production and aluminum smelting, also release fluoride into the environment.

As per the latest data presented in the Lok Sabha in September 2020, a total of 5,485 habitations across 17 states are affected by fluoride contamination in drinking water across India. According to the Bureau of Indian Standards, the desirable limit of fluoride is 1 part per million or 1 milligram per litre. Nearly 54% of these affected habitations are in Rajasthan (2,956). 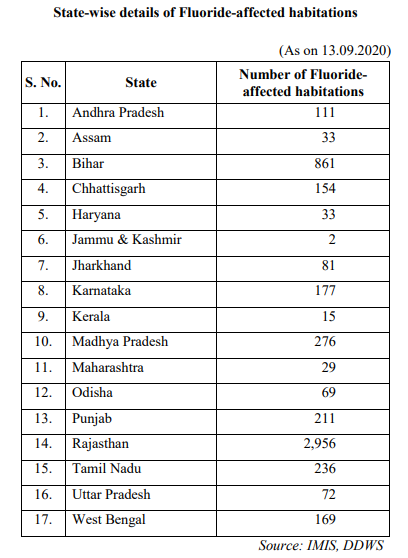 In the last 10 years, the area affected by contamination has reduced

On a positive note, there has been a decline in the number of habitations affected by fluoride in drinking water in 2020, as compared to 2015. 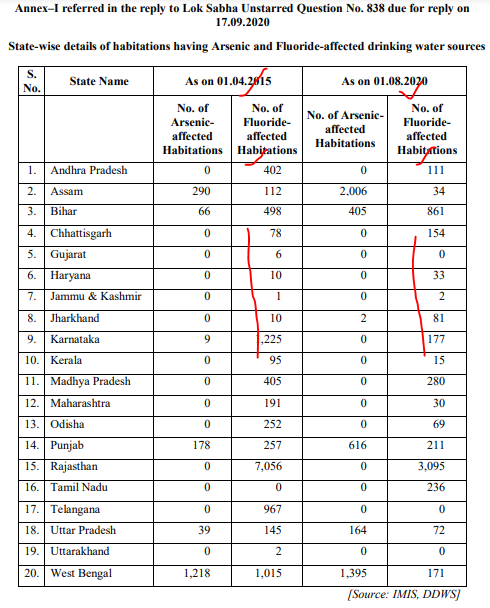 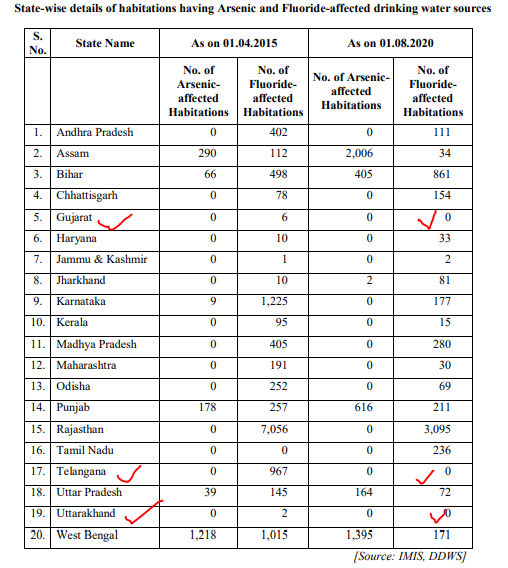 Karnataka accounts for lion’s share of fluorosis cases in India 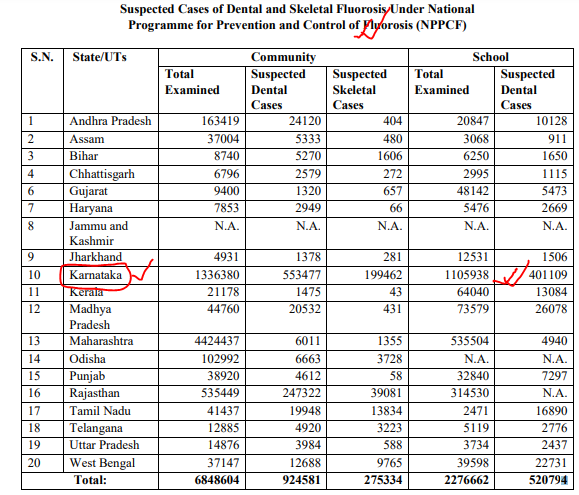 In the year 2009, Government of India rolled out a national programme for the prevention and control of fluorosis (NPPCF). The plan has targeted around 200 districts across 17 states by focusing on diagnostic activities, treatment, and rehabilitation at village and district level. Under the programme, the central government extends financial and technical support to States to strengthen their healthcare systems based on the requirements submitted by the States in their Programme Implementation Plans.

Please don’t start reading history of it. Once upon a time……..No. Just read what we have provided. That is only required.

One of the world's oldest conflicts, a territorial dispute between Armenia and Azerbaijan, has re-erupted with the heaviest clashes in years. At least 23 people were reported to have been killed as the two ex-Soviet republics battled over the Nagorno-Karabakh region. 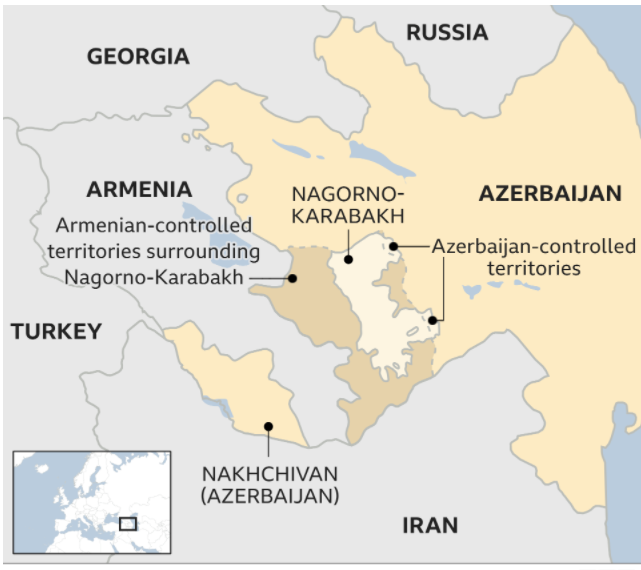 Nagorno-Karabakh is at the centre of an ethnic and territorial conflict between the two countries that dates back to the early 20th century. A breakaway Armenian-majority region inside Azerbaijan, Nagorno-Karabakh has around 150,000 inhabitants. Armenia is majority Christian, while Azerbaijan is majority Muslim.

Though it is part of Azerbaijan, Nagorno-Karabakh is run by separatist Armenians supported by the Armenian government. They have sought for decades to split from Azerbaijan and become part of Armenia, though unsuccessfully. In the 1990s, the region broke away from Azerbaijan, but has yet to be recognised by any country in the world. 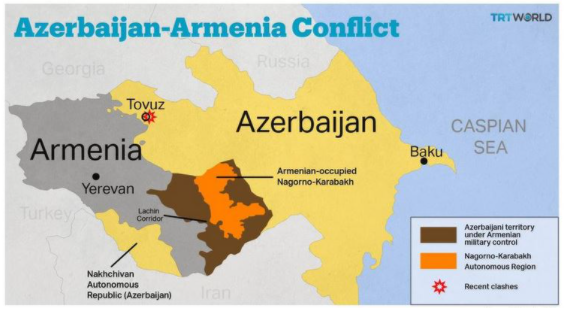 Russia has good relations with both Armenia and Azerbaijan, but it also has a defence alliance with Armenia, as both are members of the Collective Security Treaty Organisation (CSTO) and Russia has a military base in Armenia. Moscow has acted as the main mediator between the two countries for years, with its attempts so far largely unsuccessful.

Shia-Muslim majority Iran shares its northern borders with Azerbaijan and Armenia. While Azerbaijan has the same religious majority as Iran, the latter is reportedly backing Armenia due to trade ties with Yerevan (capital of Armenia) as well as Tehran’s political alliance with Russia.

Turkey supports Azerbaijan, not least because of cultural and linguistic ties between the two countries. Ankara was the first to recognize Azerbaijan after its independence from the Soviet Union in 1991. On the other hand, Turkey has strained relations with Armenia, rooted in Armenian genocide accusations against the Ottoman empire. The two countries have no official diplomatic relations.  During the war between Armenia and Azerbaijan over Nagorno-Karabakh in 1993, Turkey closed its borders with Armenia in support for Baku.

India’s sandalwood trees are facing a serious threat due to Sandalwood Spike Disease (SSD). The natural population of sandalwood in Marymoor Sandal Forest of Kerala and various reserve forests in Karnataka, including MM Hills (Malai Mahadeshwara Wildlife Sanctuary), are heavily infected with SSD. 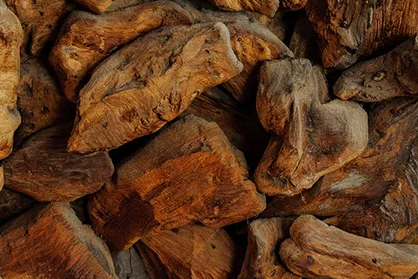 Recent Steps: In an effort to combat the killer disease, the Institute of Wood Science and Technology (IWST), Bangalore will join hands with the Pune-based National Centre for Cell Sciences for a three-year study, initiated by the Union Ministry of AYUSH with a financial allocation of Rs. 50 lakhs.

Santalum album L. popularly known as Indian sandalwood, “Srigandha” or “Chandana” has been the most valuable timber in India known for its religious and cultural value since time immemorial. It is deeply associated with the social rituals of Indians and has held a special place in all the major religions of India.

The significance of Indian sandalwood and its intimate association with Indians is greatly reflected in written records and oral traditions of India. The heartwood is highly priced for its enriched aromatic essential oil in national and international markets.  The oil is used in aroma therapy, cosmetics, perfumes, pharmaceuticals and as an essential commodity on special occasions. 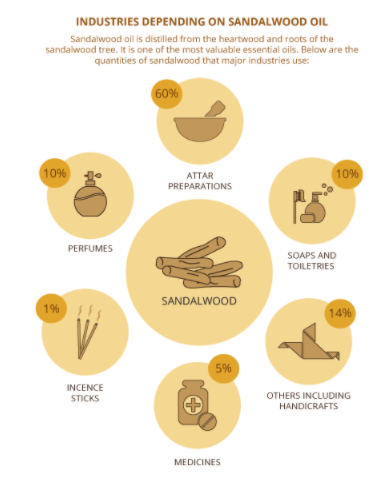 Indian sandalwood is indigenous to peninsular India. Due to over-exploitation and illicit felling, S. album is enlisted in vulnerable category of IUCN Red List. 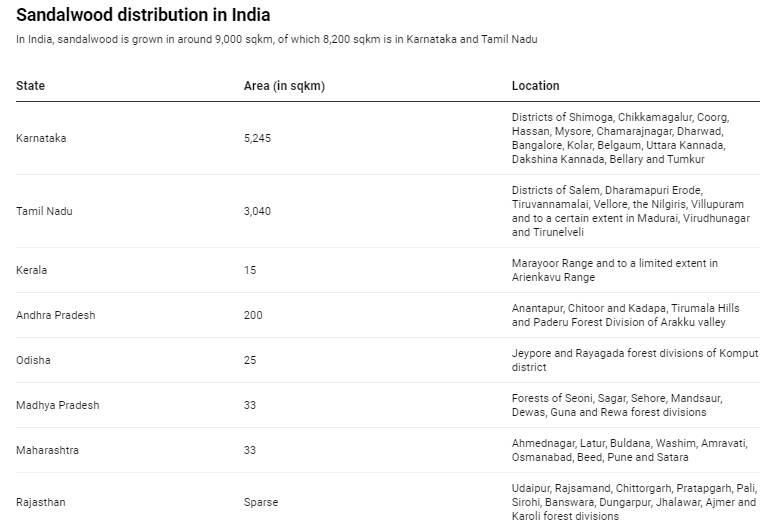 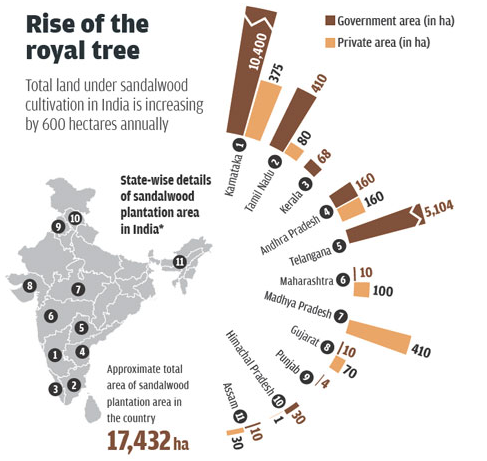 The Amendment Bill amends the Foreign Contribution (Regulation) Act, 2010.  The Act regulates the acceptance and utilization of foreign contribution by individuals, associations and companies.  Foreign contribution is the donation or transfer of any currency, security or article (of beyond a specified value) by a foreign source.

Its very important you read the objective of this Bill: 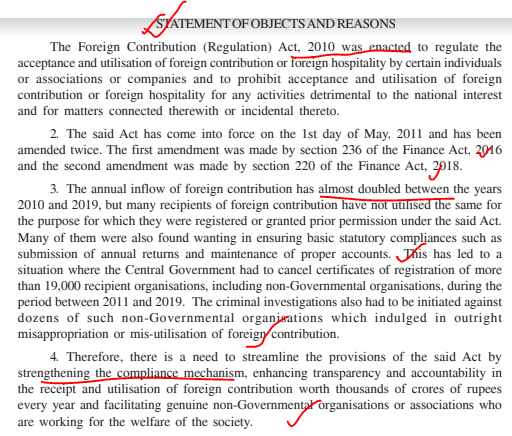 The Ministry observed that many organizations failed to ensure basic statutory compliances, and this had led to a situation where the Central Government had to cancel certificates of registration of more than 19,000 recipient organizations. With this in mind, the object of the Centre seems to be streamlining the provisions of the FCRA "by strengthening the compliance mechanism, enhancing transparency and accountability in the receipt and utilization of foreign contribution" and "facilitating genuine non-Governmental organizations" working for the welfare of the society".

Prohibition to accept foreign contribution: Under the Act, certain persons are prohibited to accept any foreign contribution.  These include election candidates, editor or publisher of a newspaper, judges, government servants, members of any legislature, and political parties, among others.  The Bill adds public servants (as defined under the Indian Penal Code) to this list.  Public servant includes any person who is in service or pay of the government or remunerated by the government for the performance of any public duty.

Renewal of license: Under the Act, every person who has been given a certificate of registration must renew the certificate within six months of expiration.  The Bill provides that the government may conduct an inquiry before renewing the certificate to ensure that the person making the application: (i) is not fictitious or benami, (ii) has not been prosecuted or convicted for creating communal tension or indulging in activities aimed at religious conversion, and (iii) has not been found guilty of diversion or misutilization of funds, among others conditions.

Surrender of certificate: The Bill adds a provision allowing the central government to permit a person to surrender their registration certificate.  The government may do so if, post an inquiry, it is satisfied that such person has not contravened any provisions of the Act, and the management of its foreign contribution (and related assets) has been vested in an authority prescribed by the government.

Suspension of registration: Under the Act, the government may suspend the registration of a person for a period not exceeding 180 days.  The Bill adds that such suspension may be extended up to an additional 180 days.

G7 ministers back extension of debt freeze for poorest nations

G7 finance ministers has backed an extension of a G20 bilateral debt relief initiative for the world’s poorest countries but said it must be revised to address shortcomings hindering implementation.

In response to the COVID-19 "call to action" from the World Bank and the IMF, the G20 announced a debt service suspension initiative (the "DSSI") on 15 April, supporting an NPV-neutral, time-bound suspension of principal and interest payments for eligible countries that make a formal request for debt relief from their official bilateral creditors, and encouraging private creditors to participate on comparable terms.

We will also learn about G-7 Countries.

G7 stands for “Group of Seven” industrialized nations. It used to be known as the G8 (Group of Eight) until 2014 when Russia was excluded because of its annexation of Crimea from Ukraine. 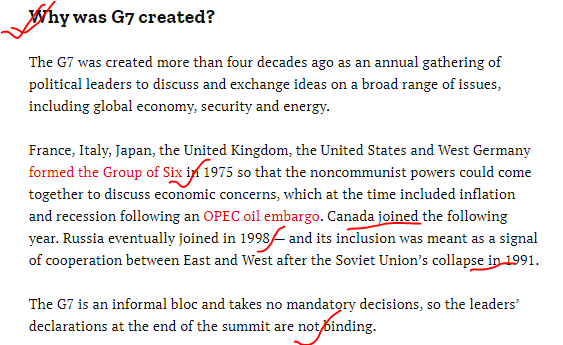 Which countries are members of the G7?

The group includes the United States, the United Kingdom, Germany, Canada, Japan, France and Italy. Together, the G7 countries represent 40% of global GDP and 10% of the world’s population.

Why was Russia kicked out of the G8?

Russia was kicked out of the then G8 in 2014 after it annexed Crimea from Ukraine, which was seen by leaders as a “violation of Ukraine’s sovereignty and territorial integrity”. 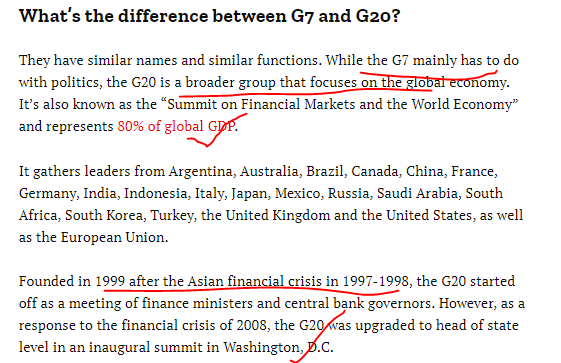