This topic is based on the report: ‘State Finances: A Study of Budgets’, which provides a detailed review of the financial situation of the States based on the annual budgets of the state governments.

The RBI released this year’s report on 27 October 2020. The current annual report assumes significance in view of COVID-19 epidemic and its impact on the economy of the country as well as states. Here, we take a look at few of the key observations made by RBI in this regard.

There is a precedence of Pandemics resulting in a negative impact on the economy.

The RBI’s report notes that an event study analysis of four pandemic outbreaks – 1896 plague, 1918 Spanish flu, 1957 Asian Flu & 1974 Smallpox, indicate a contraction/deceleration of GDP in conjecture with these events.

A positive aspect from the earlier precedence of pandemics is the recovery pattern. It is observed that there is a sharp rebound following the contraction, due to the stimuli and other efforts.

However, a crucial difference this time around is that the current slowdown is not only due to COVID-19, since there were indications of a slowdown even before the pandemic, due to various reasons. In this context, it is not clear whether the previous pattern of rebound would be applicable in this case also.

As per the information provided by the World Health Organization (WHO), the vulnerability to COVID-19 and the mortality risk it carries is higher among older people and those with co-morbidities like Hypertension, cardiovascular diseases, respiratory diseases etc.

Therefore, the demographic profile of the state/country has a bearing on the susceptibility to COVID-19. 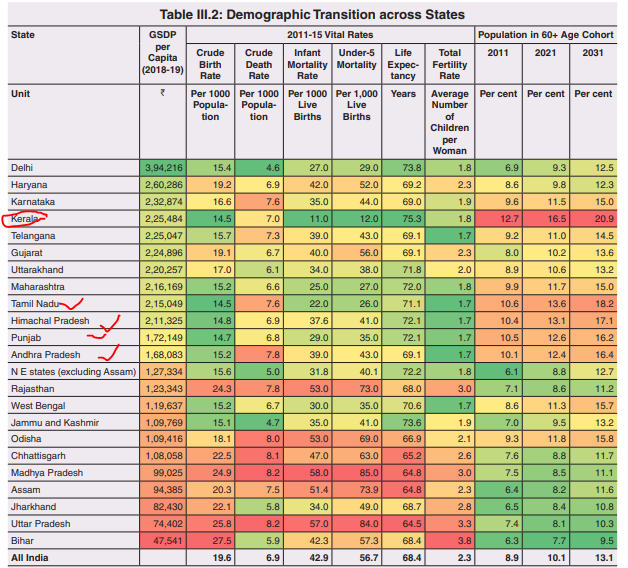 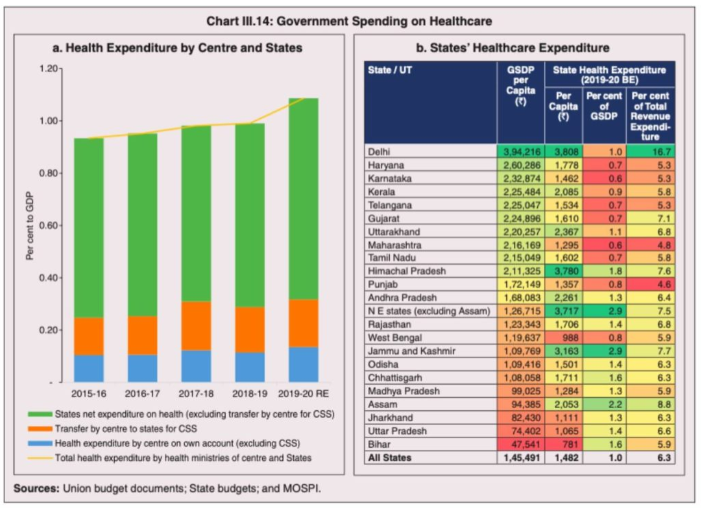 Tomorrow we will see impact of COVID-19 in the areas of employment, migration of workers, MSMEs & businesses, financial transactions etc.

A hundred cities worldwide, including 30 in India, face the risk of ‘severe water scarcity’ by 2050, according to a recent report by Worldwide Fund for Nature (WWF).

The cities would face a ‘grave water risk’ by 2050 due to a dramatic increase in their population percentage to 51 per cent by 2050, from 17 per cent in 2020, according to a press statement by WWF-India.

More than half of the identified cities are from China and India. 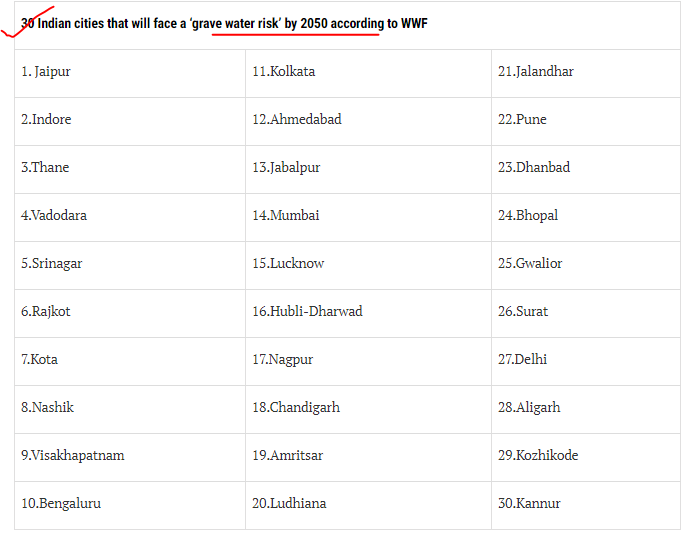 What needs to be done?

The Worldwide Fund for Nature (WWF) is an international non-governmental organization founded in 1961 that works in the field of wilderness preservation and the reduction of human impact on the environment.

WWF aims to "stop the degradation of the planet's natural environment and to build a future in which humans live in harmony with nature. "The Living Planet Report has been published every two years by WWF since 1998; it is based on a Living Planet Index and ecological footprint calculation.

In addition, WWF has launched several notable worldwide campaigns, including Earth Hour and Debt-for-Nature Swap, and its current work is organized around these six areas: food, climate, freshwater, wildlife, forests, and oceans.

WWF-India is the Indian part of the WWF. It has an autonomous office, with the Secretariat based in New Delhi.

The Union Government has extended the Emergency Credit Line Guarantee Scheme (ECLGS) by one month till 30th November 2020, or till such time that an amount of Rs. 3 lakh crores is sanctioned under the Scheme, whichever is earlier. Before it was till 30 October.

What is the objective of the Scheme?

The Scheme is a specific response to the unprecedented situation COVID-19. It seeks to provide much needed relief to the MSME sector by incentivizing Member Lending Institutions (MLIs) to provide additional credit of up to Rs. 3 lakh crores at low cost, thereby enabling MSMEs to meet their operational liabilities and restart their businesses.

Who provides the guarantee?

The credit facility is guaranteed by the National Credit Guarantee Trustee Company (NCGTC). It gives the guarantee to Member Lending Institutions (MLIs) up to Rs. 3 lakh crores to eligible MSMEs.

Loans provided by these banks and NBFCs to the eligible MSMEs will be qualified for getting the guarantee. An important condition is that the loan availing MSMEs should not have any NPAs.

Who are the MLIs under the Scheme?

All Scheduled Commercial Banks are eligible as MLIs. NBFCs which have been in operation for at least 2 years as on 29.2.2020, and Financial Institutions are also be eligible as MLIs under the Scheme.

Who are the eligible MSMEs?

For the scheme, the eligible MSMEs include MSMEs/ Business Enterprises which are constituted as Proprietorships, Partnerships, Registered Companies, Trusts and Limited Liability Partnerships (LLPs), besides interested borrowers under Pradhan Mantri Mudra Yojana (PMMY). In terms of loan size following are the eligibility criteria for MSMEs:

Does PMMY beneficiaries eligible for ECLGS?

Loans under PMMY extended on or before February 29, 2020 and reported on the MUDRA portal are also eligible under the Scheme.

What would be the tenor of loans provided under Emergency Credit Line Guarantee Scheme?

The tenor of loans provided under GECL shall be four years from the date of disbursement. No pre-payment penalty shall, however, be charged by the MLIs in case of early repayment.

Many States are passing Bills to stall Centre’s farm laws. Are states allowed to do so?

What does the Constitution say on this?

Agriculture is in the state list under the Constitution. But Entry 33 of the Concurrent List provides Centre and the states powers to control production, supply and distribution of products of any industry, including agriculture.

What usually happens when State wants to amend Central Laws?

So, in both the cases, State Government can loose discretion.

So, what are the options available to States? This is an arrangement envisaged as most Parliament laws apply to the whole of India and states amending the Central laws indiscriminately could lead to inconsistencies in different regions on the application of the same law.

The other option available with the states is:

Unlike individuals, State governments cannot complain of fundamental rights being violated. Therefore, the Constitution provides that whenever a State feels that its legal rights are under threat or have been violated, it can take the “dispute” to the Supreme Court. States have filed such cases under Article 131 against neighbouring State and Centre.

A state legislation passed under Article 254 (2) requires the assent of the President of India.

A UK judge presiding over the extradition proceedings of Nirav Modi on Tuesday ruled that the evidence submitted by the Indian authorities to establish a prima facie case of fraud and money laundering against the fugitive diamantaire is broadly admissible.

We see all details related to Extradition in India.

As defined by Hon’ble Supreme Court of India, ‘Extradition is the delivery on the part of one State to another of those whom it is desired to deal with for crimes of which they have been accused or convicted and are justifiable in the Courts of the other State’.

An Extradition request for an accused can be initiated in the case of under-investigation, under-trial and convicted criminals.

In cases under investigation, abundant precautions have to be exercised by the law enforcement agency to ensure that it is in possession of prima facie evidence to sustain the allegation before the Courts of Law in the Foreign State.

What is the Legislative Basis for Extradition in India?

Who is the nodal authority for Extradition in India?

Consular, Passport & Visa (CPV) Division, Ministry of External Affairs, Government of India is the Central/Nodal Authority that administers the Extradition Act, and it processes incoming and outgoing Extradition Requests. 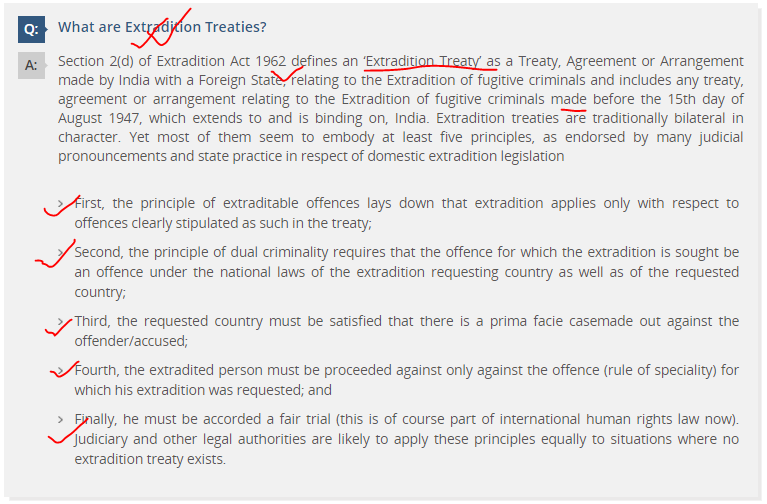 Does India need a treaty with a foreign country to make a provisional arrest request?

What are the bars to Extradition?

An alleged offender may not be extradited to the requesting state in the following cases:

Can the decision to be extradited be appealed against by the alleged offender?

India has Extradition Treaties currently in force with the following Countries: Click here Must see once.