What are direction of courts and tribunals against bursting firecrackers?

During the winter months, because of the low temperature and higher wind speed and humidity, particulate matter remains suspended in the air for a longer time than during other seasons. Thus, the emissions from automobiles, diesel generators, dust from construction sites, industrial pollutants linger in the air for longer durations. It is during this season the Diwali arrives. Bursting firecrackers generate dense clouds which contain large amount of harmful and toxic chemicals such as oxides of Sulphur and Nitrogen, in addition to the black carbon particles.

Since when regulation on firecrackers started?

Back in 2001, the Supreme Court (SC) stated that firecrackers could be burst only between 6pm and 10pm. Later in 2005, the Court directed the Petroleum and Explosives Safety Organization (PESO) to evaluate and take necessary measures to classify firecrackers into two- those which emit sound and those which emit colour/light. Since the stress was on curbing noise pollution back then, a complete ban on bursting of sound emitting crackers between 10pm and 6am was imposed. However, no restrictions were in place for colour/light emitting firecrackers.

In 2015, a petition was filed in front of Supreme Court to take cognizance of ill affects of air pollution on child’s health and requested ban on firecrackers.

Following this petition, the SC directed the Central Pollution Control Board to conduct a research study to evaluate firecrackers on the basis of noise levels as well as chemical composition. Taking into consideration an Indian’s freedom of religion, freedom to carry on any occupation and business, and right to life, SC’s judgement in 2018 stated the following- 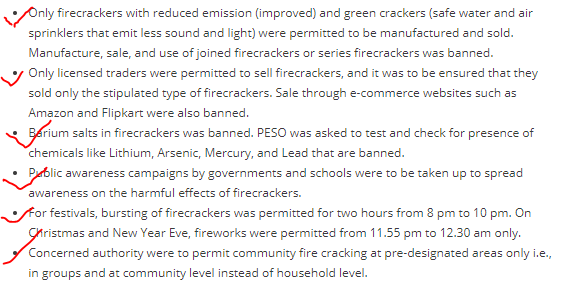 Further to this judgement, the National Green Tribunal has recently imposed a ban on sale and use of firecrackers between 09 to 30 November 2020 in those areas where the air quality is poor, very poor, and severe. In other areas, unless there are restrictions imposed by authorities, the directions stated in the 2018 SC Judgement are applicable. Only the sale and use of green firecrackers is to be permitted between 09 to 30 November. Thus, there is a complete ban in Delhi NCR region

Is there any compensation for firecrackers manufacturers? 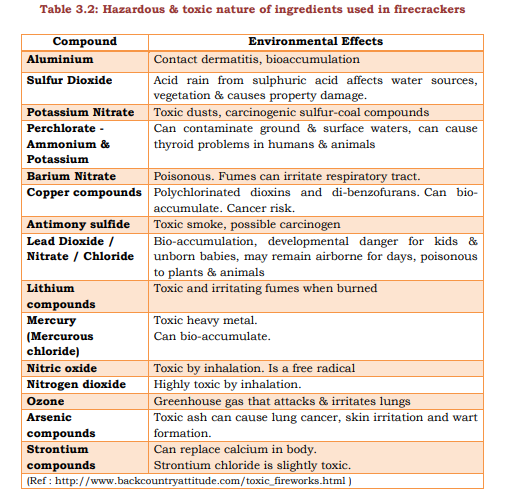 The issue of air quality & pollution should not just be discussed in the context of firecrackers & their regulation but given its due importance. Governments must take stringent measures to improve air quality across the country.  The National Clean Air Programme was launched by the Central government in 2019 to tackle air pollution with a target to achieve 20% to 30% reduction in Particulate Matter Concentrations by 2024. Whether India can achieve these targets remains to be seen. 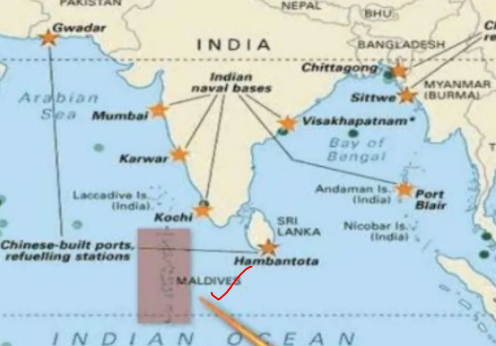 India has recently announced a $500 million package — including a grant of $100 million — in addition to previous line of credit of $800 million.

Both Male and New Delhi will have to promote mutual cooperation and extend their support to each other. Also, both the nations will have to move forward very cautiously as political opponents in Male and China are being very critical about re-growing closeness between India and Male.

Recently, scientists at Wadia Institute of Himalayan Geology (WIHG) have unearthed large concentrations of micro and moderate magnitude earthquakes in the Dharchula region and adjoining areas of Kumaon Himalaya. WIHG is an autonomous institute under the Department of Science and Technology (DST), Government of India.

The major concentration is in an area around 45 km from the new Kailash Mansarovar road, connecting Dharchula in Uttarakhand to Lipu Lekh on the China border.

The region is known as the Central Seismic Gap (CSG) region, despite the Himalayas being one of the most tectonically and seismically active regions in the country.

Scientists started investigating and mapping the region precisely to find out the reason behind the occurrence of crowded (closely located and frequently felt) earthquakes.

They established a seismological network of 15 broadband seismological stations along the Kali River valley to investigate the subsurface configuration in the Kumaon Himalaya region with support from the Ministry of Earth Sciences.

The basin of Ganga is India’s richest basin in terms of fish species — a study conducted by the Zoological Survey of India in 1991 put the number at 375.

Over the years, the increasing pollution in India’s holiest river made the survival of aquatic life difficult. In 1996, the iconic Gangetic Dolphin called ‘Tiger of the Ganges’, was categorized as endangered by the International Union for Conservation of Nature.

The number of Dolphins in the Ganga in the early 19th century was around 10,000. This came down to 3,526 by early 2000. The species, India’s national aquatic animal, had disappeared entirely in Haridwar and most of the Yamuna.

Now, five years after the launch of the mission, a survey of Ganga conducted by the Wildlife Institute of India (WII) has found that 49 per cent of the river has “very high biodiversity levels” and the sightings of biodiversity indicators, such as the Gangetic Dolphin and Otters, have increased over the last few years.

See these two species in brief: 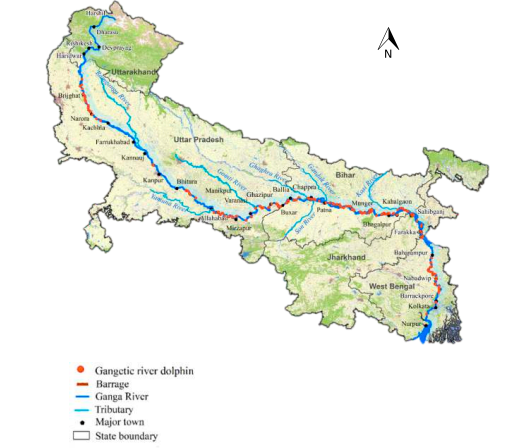 A group of scientists from the Institute of Himalayan Bioresource Technology (IHBT), Palampur, announced last week that they had planted 800 saplings of Ferula asafoetida, a natural medicine and an integral part of Indian cuisine, in the cold desert areas of Lahaul and Spiti. 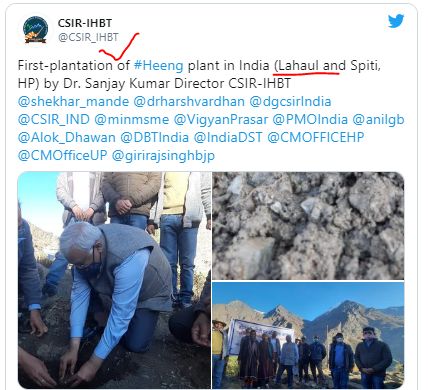 What is the status of Hing in India?

Heeng is one of the widely used spices in Indian cuisine, and the country consumes around 50% of the total production in the world. Despite this, the spice was not being grown in India, and the entire demand was met from imports, mostly from Afghanistan. Although there is no cultivation in the country, it is processed in India using imported raw heeng.

How much Hing is imported into India and how much does that add to the import bill?

Where it is best to cultivate hing?

Cold areas like Ladakh and parts of Himachal Pradesh, Uttarakhand and Arunachal Pradesh are suitable for cultivating hing. It thrives in dry soil in temperatures under 35º C.

For now, you don’t need more than this.