Status of E-waste- Global and India

Over the years, there has been a marked increase in the consumption of Electric & Electronic goods, especially mobile phones & computers both due to advancements in technology, improvement in the economic situation & availability of cheaper products in the market.

This trend is observed across the world, where-in an increased share of population are reliant on these gadgets along with the per-capita usage. While the advancements in technology have improved our lives, they have also created new challenges. One of them being the increase in electric & electronic waste. The effectiveness of disposal of such waste not only has a bearing on the environment but also on the economy.

Now we will see the status of E-waste as per the latest report- The Global E-Waste Monitor 2020.

It is a collaborative effort of the Global E-waste Statistics Partnership (GESP). GESP was formed by UN University (UNU), the International Telecommunication Union (ITU) and the International Solid Waste Association, in collaboration with the UN Environment Programme (UNEP). 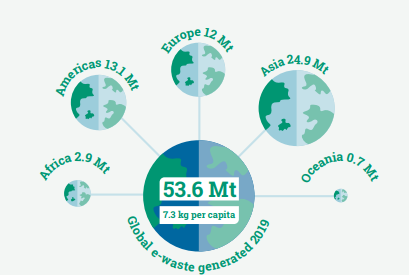 Compared 2014, the time when the global statistics of E-waste are formally available, the global E-waste increased by 9.3 Mt. 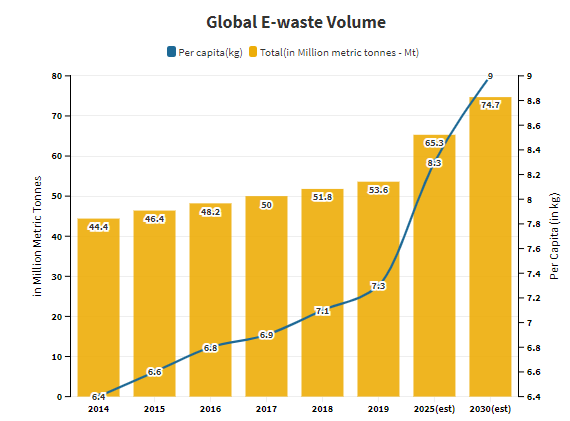 The report highlights factors such as – a higher level of disposable incomes, urbanization, industrialization, higher consumption of EEEs, short life cycles, few repair options etc. to be contributing towards an increase in E-waste. 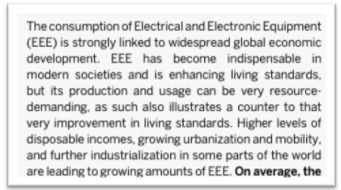 E-waste under ‘Small Equipment’ constituted the major portion of E-waste in 2019 with 17.4 Mt, followed by ‘large equipment’.

Only 17.4% of the Global E-waste is documented to be collected & properly recycled. 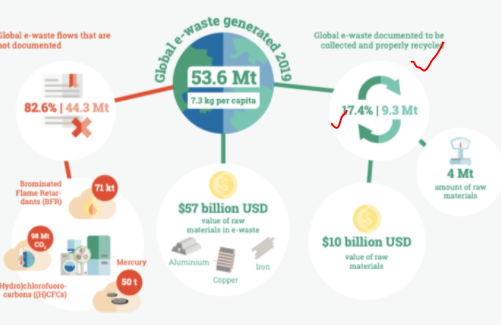 While, the lower per capita E-waste is a positive sign, India does not fare well when it comes to proper collection and recycling of E-waste. As per the available information from 2016, provided in the Global E-waste Monitor-2020, only 30 Kt (approx. 1%) is accounted for.

Responding to a question in Lok Sabha on 23 September 2020, the government stated that the estimate for the generation of E-waste is based on the sales data of 21 types of Notified EEE (as estimated by Central Pollution Control Board (CPCB)).

What are mechanisms and steps taken by government to handle e-waste? Below information is based on the reply given by minister in the Lok Sabha recently.

Government has notified E-Waste (Management) Rules, 2016. The regulations intend at taking all steps required to ensure that e-waste is managed in a manner which shall protect health and environment against any adverse effects, which may result from such e-waste. The said rules are effective from 01.10.2016and have the following specific objectives:

Hence, in view of the potential hazards that E-waste could cause to nature, government should ramp up their infrastructure and streamlines the process for better tracking & recycling of e-waste.

Multinational drug company Pfizer has announced promising results from its ongoing phase-3 trial of a potential COVID-19 vaccine. However, these early results, of the vaccine candidate being “90% protective” in the trial’s volunteers - nearly 40,000 are enrolled - is the only important detail that is public.

Also, India’s very own m-RNA (messenger-RNA) vaccine could be ready by March. The novel m-RNA vaccine candidate of the Pune-based Gennova Biopharmaceuticals was approved for funding as early as July by the Department of Biotechnology (DBT).

In this regard, we will understand few basic concepts regarding m-RNA Vaccine. How does RNA vaccines work? First let us understand Conventional vaccines.

How are RNA vaccines produced and administered?

RNA vaccines can be delivered using a number of methods: via needle-syringe injections or needle-free into the skin; via injection into the blood, muscle, lymph node or directly into organs; or via a nasal spray.

The optimal route for vaccine delivery is not yet known. The exact manufacturing and delivery process of RNA vaccines can vary depending on the type.

How are they beneficial?

RNA vaccines are faster and cheaper to produce than traditional vaccines, and a RNA based vaccine is also safer for the patient, as they are not produced using infectious elements. A major advantage of RNA vaccines is that RNA can be produced in the laboratory from a DNA template using readily available materials, less expensively and faster than conventional vaccine production, which can require the use of chicken eggs or other mammalian cells.

What are the challenges in floating out this vaccine in India?

Vaccination is one of the major success stories of modern medicine, greatly reducing the incidence of infectious diseases such as measles, and eradicating others, such as smallpox.

Conventional vaccine approaches have not been as effective against rapidly evolving pathogens like influenza or emerging disease threats such as the Ebola or Zika viruses. RNA based vaccines could have an impact in these areas due to their shorter manufacturing times and greater effectiveness. Beyond infectious diseases, RNA vaccines have potential as novel therapeutic options for major diseases such as cancer.

All discoms to come under EC Act

The power ministry said it has mandated all electricity distribution utilities or discoms to comply with the Energy Conservation (EC) Act, 2001, which would reduce energy losses and bring in more transparency in the sector. Earlier, only discoms with annual energy losses equal to or above 1,000 MU (million units), notified as designated consumers, used to come under the purview of the EC Act. The ministry had issued a notification on September 28, 2020 to cover all electricity distribution companies (discoms) under the preview of the EC Act.

How this move will help?

The Government of India has set up the Bureau of Energy Efficiency (BEE) on 1st March 2002 under the provision of the Energy Conservation Act, 2001.

The mission of Bureau of Energy Efficiency is to assist in developing policies and strategies with a thrust on self-regulation and market principles with the primary objective of reducing energy intensity of the Indian economy within the overall framework of the Energy Conservation Act, 2001.

First of all, see, how NDB was formed:

At the fourth BRICS Summit in New Delhi (2012), the leaders of Brazil, Russia, India, China and South Africa considered the possibility of setting up a new Development Bank to mobilize resources for infrastructure and sustainable development projects in BRICS and other emerging economies, as well as in developing countries. They directed Finance Ministers to examine the feasibility and viability of this initiative, to set up a joint working group for further study, and to report back by the next Summit in 2013.

Following the report from the Finance Ministers at the fifth BRICS summit in Durban (2013), the leaders agreed on the feasibility of establishing the New Development Bank and made the decision to do so. It was also agreed that the initial contribution to the Bank should be substantial and sufficient for it to be effective in financing infrastructure. 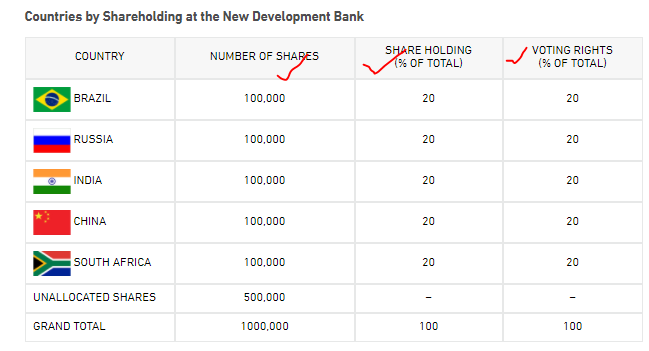 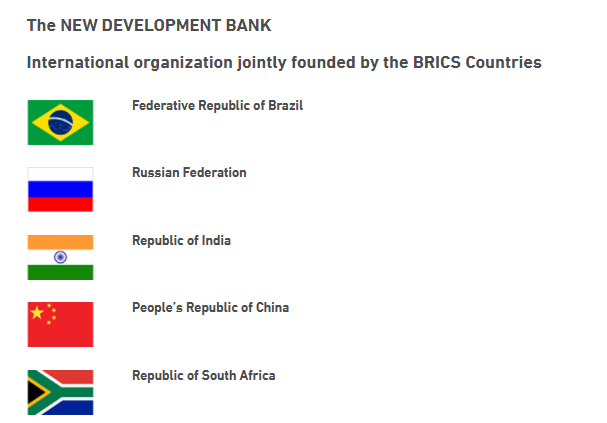 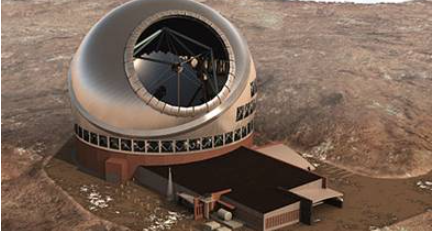 2020 Physics Nobel Laureate Prof. Andrea Ghez had worked closely with Indian astronomers on the design of back-end instruments and possible science prospects of the Thirty Meter Telescope (TMT) project being installed at Maunakea in Hawaii, which can revolutionized the understanding of the universe and the enigmas in it.

The Thirty-meter telescope (TMT) project is an international partnership between CalTech, Universities of California, Canada, Japan, China, and India; through the Department of Science and Technology (DST) and Department of Atomic Energy (DAE).

India has committed 10% of the project’s resources – a sum of about $200 million (Rs 1,423.46 crore) – and Indian scientists are in turn guaranteed 10% of observation time on the TMT once it is ready.

It aims to study the outer reaches of the universe and study distant stars and exoplanets than much greater detail than is currently possible. It will allow deeper exploration into space and observe cosmic objects with unprecedented sensitivity.