The Sustainable Development Report 2021 presents the SDG Index and Dashboards for all UN member states, outlines the short-term impacts of COVID-19 on the SDGs, and describes how the SDGs can frame the recovery.

It was prepared by teams of independent experts at the Sustainable Development Solutions Network (SDSN) and the Bertelsmann Stiftung.

The report is not an official monitoring tool. It uses publicly available data published by official data providers (World Bank, WHO, ILO, others) and other organizations including research centers and non-governmental organizations.

The COVID-19 pandemic is a setback for sustainable development everywhere. For the first time since the adoption of the SDGs in 2015, the global average SDG Index score for 2020 has decreased from the previous year. 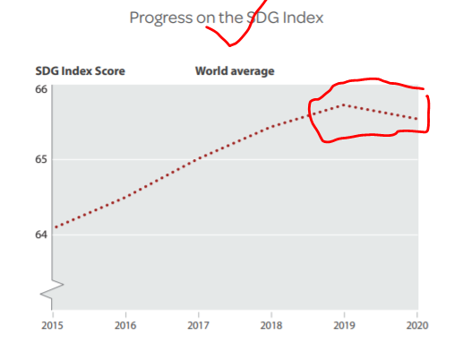 The SDG Index is an assessment of each country’s overall performance on the 17 SDGs, giving equal weight to each Goal. The score signifies a country’s position between the worst possible outcome (0) and the best, or target outcome (100).

This year’s SDG Index is topped by three Nordic countries – Finland, Sweden, and Denmark – yet even these countries face major challenges in achieving several SDGs. 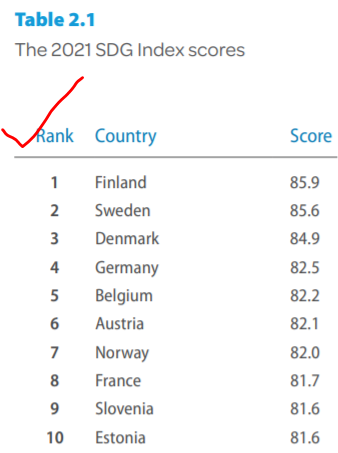 India’s performance on all goals:

You don’t need to know anything more about the Index.

The concept of Compulsory Licensing with respect to India.

What is compulsory licensing?

Compulsory licensing is when a government allows someone else to produce a patented product or process without the consent of the patent owner or plans to use the patent-protected invention itself. It is one of the flexibilities in the field of patent protection included in the WTO’s agreement on intellectual property — the TRIPS (Trade-Related Aspects of Intellectual Property Rights) Agreement.

The concept is not new. They always existed in the TRIPS Agreement, ever since it took effect in January 1995.

Does there have to be an emergency?

Not necessarily. This is a common misunderstanding. The TRIPS Agreement does not specifically list the reasons that might be used to justify compulsory licensing. However, the Doha Declaration on TRIPS and Public Health confirms that countries are free to determine the grounds for granting compulsory licenses, and to determine what constitutes a national emergency.

The TRIPS Agreement does list a number of conditions for issuing compulsory licences, in Article 31. In particular:

-  normally the person or company applying for a licence has to have tried, within a reasonable period of time, to negotiate a voluntary licence with the patent holder on reasonable commercial terms. Only if that fails can a compulsory licence be issued, and - even when a compulsory licence has been issued, the patent owner has to receive payment; the TRIPS Agreement says “the right holder shall be paid adequate remuneration in the circumstances of each case, taking into account the economic value of the authorization”, but it does not define “adequate remuneration” or “economic value”.

Now, with respect to India:

What are Compulsory Licenses under the Patents Act?

The Office of the Controller General of Patents & Designs administers (Ministry of Commerce) the Patent Act, 1970 and the Rules made there under.

Compulsory licenses are authorizations given to a third-party by the Controller General to make, use or sell a particular product or use a particular process which has been patented, without the need of the permission of the patent owner.

There are certain pre-requisite conditions, which need to be fulfilled if a compulsory license is to be granted in favour of someone.

As per Section 84, any person, regardless of whether he is the holder of the license of that Patent, can make a request to the Controller for grant of compulsory license on expiry of three years, when any of the following conditions is fulfilled –

Further, compulsory licenses can also be issued Suo motu by the Controller under section 92, pursuant to a notification issued by the Central Government if there is either a "national emergency" or "extreme urgency" or in cases of "public non-commercial use".

India's first ever compulsory license was granted by the Patent Office on March 9, 2012, to Natco Pharma for the generic production of Bayer Corporation's Nexavar, a life saving medicine used for treating Liver and Kidney Cancer.

Bayers sold this drug at exorbitant rates, with one month's worth of dosage costing around Rs 2.8 Lakh. Natco Pharma offered to sell it around for Rs 9000, making it affordable for people belonging to every stratum. All the 3 conditions of section 84 were fulfilled and the decision was taken for the benefit of general public.

Compulsory licensing has now become the hope for financially challenged patients in underdeveloped countries. India needs this provision owing to the economic condition of the majority population. But the challenge is that on one hand, it has to comply with the international standards of patent protection and on the other, it has to safeguard public health.

GCF was established under the Cancún Agreements in 2010 as a dedicated financing vehicle for developing countries within the global climate architecture, serving the Financial Mechanism of the UNFCCC and the Paris Agreement. Since the approval of the first project funding in 2015, GCF has made rapid strides in building a portfolio of more than 100 projects.

The Green Climate Fund is headquartered in Songdo, Incheon City, Republic of Korea.

In order to scale up GCF’s activities and de-risk the delivery of capital flows, GCF has set up the Private Sector Facility (PSF), a dedicated division designed to fund and mobilize private sector actors, including institutional investors, project sponsors and financial institutions.

National Designated Authorities (NDAs) are government institutions that serve as the interface between each country and the Fund. They provide broad strategic oversight of the GCF’s activities in the country and communicate the country’s priorities for financing low-emission and climate-resilient development.

In India, Ministry of environment, Forest and Climate Change is the National Designated Authority for green climate fund.

Don’t read just two three headings of any important Act. Questions are asked now from deep inside topics. Go through all provisions.

2. For children in the age group of 6 months to 6 years, the Bill guarantees an age-appropriate meal, free of charge, through the local anganwadi. For children aged 6-14 years, one free mid-day meal shall be provided every day (except on school holidays) in all schools run by local bodies, government and government aided schools, up to Class VIII. For children below six months, “exclusive breastfeeding shall be promoted”.

3. Every pregnant and lactating mother is entitled to a free meal at the local anganwadi (during pregnancy and six months after childbirth) as well as maternity benefits of Rs 6,000, in instalments.

4. The Central Government is to determine the state-wise coverage of the PDS, in terms of proportion of the rural/urban population. Then numbers of eligible persons will be calculated from Census population figures.

6. The Act provides for the creation of State Food Commissions. Each Commission shall consist of a chairperson, five other members and a member-secretary (including at least two women and one member each from Scheduled Castes and Scheduled Tribes).

7. The Centre should provide all possible resource and funds to prevent scarcity.

Recently, the 31st edition of India-Thailand Coordinated Patrol (Indo-Thai CORPAT) between the Indian Navy and the Royal Thai Navy was conducted in the Andaman Sea close to the Strait of Malacca.

For us, more important is the map: 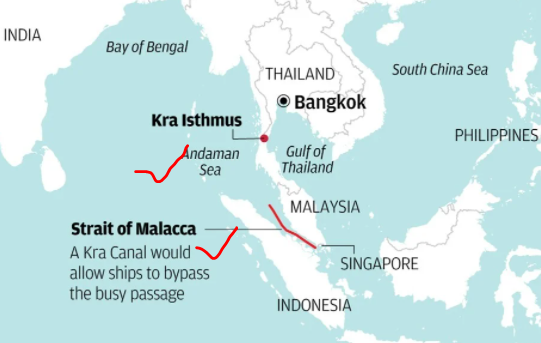 India and Thailand have been carrying out CORPAT along their International Maritime Boundary Line twice a year since 2005.

In line with India’s SAGAR Vision:

As part of Indian Government’s vision of Security and Growth for All in the Region (SAGAR), the Indian Navy has been involved in assisting countries in the Indian Ocean Region with Exclusive Economic Zone (EEZ) Surveillance, Humanitarian Assistance and Disaster Relief (HADR), and other capacity building and capability-enhancement activities, on their request.

Other Military Exercises between India and Thailand: