Right to Be Forgotten ("RTBF") principles in respect to India.

Recently, by applying Right to Be Forgotten ("RTBF") principles, Delhi High Court directed Google to remove access to a judgment from their portals.

Though RTBF is well established across the world, Indian courts have not had much occasion to deal with the same. We will see here few aspects of it.

Do We Have a Right to Be Forgotten?

At present, the data protection regime in India does not contain the RTBF principles but there is a compelling argument that this right must be read as part of Article 21 of the Constitution of India.

Such an interpretation is a result of the law laid down by K.S. Puttaswamy and Anr. vs Union of India and Ors (2017) case which confirmed the right to privacy to be part and parcel of the fundamental right to life and personal liberty enshrined in the Constitution.

Other judgements too record:

that "the existence of such a right does not imply that a criminal can obliterate his past, but that there are variant degrees of mistakes, small and big, and it cannot be said that a person should be profiled to the nth extent for all and sundry to know."

Do we have any International Jurisprudence of RTBF?

Yes, we have General Data Protection Regulations (GDPR) 2016 of UK which came into force on the 25th May 2018. GDPR has been implemented under the Data Protection Act 1998, which governs transfer of all personal data including the ability to appeal to the Information Commissioners Office, in the event, search engines refuse to remove personal data.

India has been a late entrant to internet privacy and it was only in 2019, the Personal Data Protection (PDP) Bill was introduced in the Lok Sabha. T

The PDP Bill differs from GDPR with regard to RTBF. While GDPR allows permanent erasure of personal data immediately:

the PDP Bill allows total erasure only on the first ground.

Under the PDP Bill, the data principal would be required to directly apply to the Adjudicating Officer, not the data fiduciary and even third parties can seek review of the order against disclosure.

With countries like the United Kingdom, Australia and other member states of the European Union leaning strongly in favour of RTBF, it is time for India to re-calibrate our legal and statutory framework in this regard. If the PDP Bill is passed in its current form, the discretion of the Adjudicating Officer has to be carefully exercised on a case-to-case basis, as to whether the RTBF of a particular offender outweighs the interests of prevention and detection of offences; or if the personal data is used for domestic or commercial purposes and so on, instead of a blanket response for all cases.

The Bill currently has been referred to Standing Committee.

Rising global sea levels have been touted as the major threat that is going to affect small archipelago of Lakshadweep in the Arabian Sea.

A team of scientists with support from the Department of Science & Technology, Government of India under the Climate Change Programme (CCP), studied the Climate projections of sea level rise and associated coastal inundation in atoll islands, a ring-shaped coral reef or island.

As per the study, Sea-level will rise around the Lakshadweep Islands in the range between 0.4 mm/year to 0.9 mm/year.

The study estimated that smaller islands Chetlat and Amini are expected to have major land-loss. Projection mapping indicated that about 60%-70% of existing shoreline would experience land-loss in Amini and about 70%-80% in Chetlat. The present work highlights that, larger islands Minicoy and the capital Kavaratti are also vulnerable to sea-level rise, and expected to experience land-loss along 60% of the existing shoreline. Sea-level rise effects are seen to have the least impact on Androth Island under all emission scenarios. 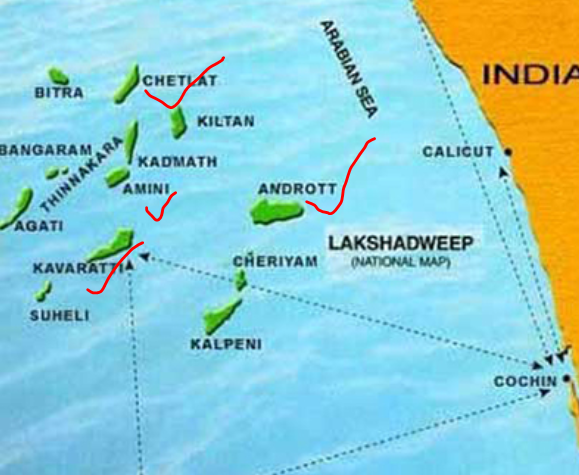 The study shows that coastal inundation could have wide socio-economic impact. According to the team, projected inundation due to sea-level rise can impact the islanders as residential areas are quite close to the present coastline. Also, the only airport in the archipelago is located at the southern tip of Agatti Island, and has a high likelihood of damage due to inundation from sea-level rise.

How study will be useful?

This study opens up a new outlook and dimension on future research to assess the directional nature of wave energy, impact of storminess in the Arabian Sea region, islands that are exposed and sheltered and amenities such as potable water, sanitation and so on.

This noteworthy study has practical value and can be immensely useful to policy makers and decision-making authorities for both short and long-term planning that benefit the population in Lakshadweep Islands.

Thermal Expansion: When water heats up, it expands. About half of the sea-level rise over the past 25 years is attributable to warmer oceans simply occupying more space.

Melting Glaciers: Higher temperatures caused by global warming have led to greater-than-average summer melting of large ice formations like mountain glaciers as well as diminished snowfall due to later winters and earlier springs. That creates an imbalance between runoff and ocean evaporation, causing sea levels to rise.

Biotech-Krishi Innovation Science Application Network (Biotech-KISAN) is a Department of Biotechnology, Ministry of Science and Technology initiative that empowers farmers, especially women farmers. It aims to understand the problems of water, soil, seed and market faced by the farmers and provide simple solutions to them.

Objectives and Scope of coverage

Biotech-Krishi Innovation Science Application Network (Biotech-KISAN) is being implemented in 15 Agro-climatic zones of India in phased manner with the following objectives:

The Programme will provide support for following three components:

The Hub: Establishment of Biotech - KISAN Hub in each of 15 Agro-climatic zones of the country under the leadership of a champion, who will act as a Facilitator. Each Hub will create a network by developing strong linkages with top quality scientific institutions / State Agri cultural Universities (SAUs) / Krishi Vigyan Kendras (KVKs) / existing state agriculture extension services / system and other Farmers’ organizations in the region as well as linkages with leading international institutions / organizations. Biotech-KISAN Hub will have a tinkering laboratory. The Hub will get financial assistance for initially 2 years of Rs 60 lakhs per year and on the basis of a review for additional 3 years

Research projects: If scientists during the course of these programmes identify a problem, which would require larger funding; it would be possible for them to submit the research project proposal to the Programme for additional funding.

International Training: Short - term Training (STT) Programmes will be developed by DBT in partnership with international organisations / universities, where Farmers will be exposed to best global farm management and practices.

Depending on the activities carried out by scientists/farmers in India; selected groups will be sponsored by DBT for international STT. The current collaborating universities are Cambridge University, UK; Wageningen University, Netherlands and others are likely to be added.

To commemorate the World Sickle Cell Disease (SCD) Day on 19th June, the Ministry of Tribal Affairs (MOTA) flagged off mobile vans under the Unmukt project for strengthening screening and timely management of SCD in tribal districts of Jharkhand and Chhattisgarh.

Sickle cell disease (SCD) is one of the most prevalent inherited blood disorders in the world. The defect arises from a single mutation in the gene, encoding beta-globin chain of haemoglobin (the protein in red blood cells (RCB) that helps in carrying oxygen throughout the body).

It is a group of disorders that affects haemoglobin, the molecule in red blood cells that delivers oxygen to cells throughout the body.

People with this disease have a typical haemoglobin molecule called haemoglobin S, which can distort red blood cells into a sickle, or crescent shape. This blocks blood flow and oxygen from reaching all parts of the body. 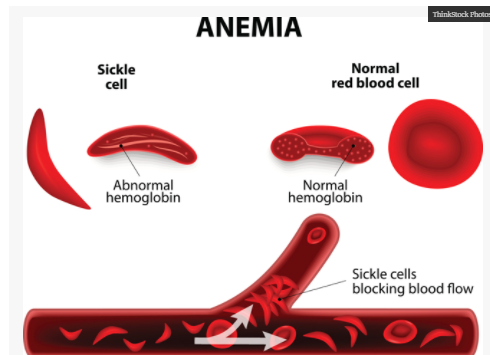 India alone is home to about 150,000 patients with sickle cell disease and about 88% of SCA cases in Asia. Cases are predominantly found in central India, and northern Kerala and Tamil Nadu, which is also known as the sickle belt of India.

Genetic counselling is of paramount importance as the disease has no permanent cure except bone marrow transplant. In areas with high prevalence of SCA, awareness programs should be implemented and routine screening should be done to detect carrier status.

What is the summer solstice?

The summer solstice marks the official start of summer. It brings the longest day and shortest night of the year for the 88 percent of Earth’s people who live in the Northern Hemisphere. 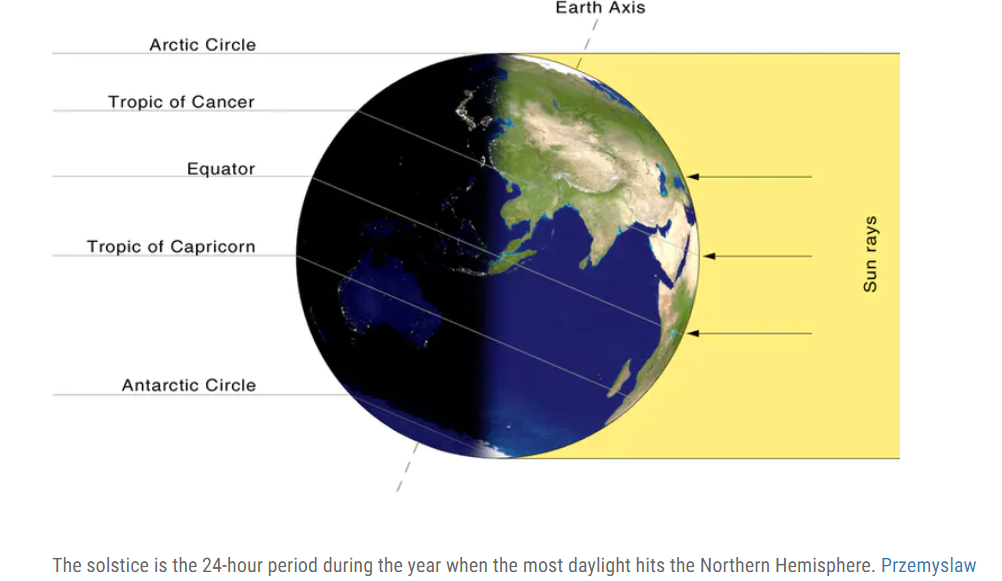 Astronomers can calculate an exact moment for the solstice, when Earth reaches the point in its orbit where the North Pole is angled closest to the sun. That moment will be at 09:01 a.m. on June 21 this year. From Earth, the sun will appear farthest north relative to the stars. People living on the Tropic of Cancer, 23.5 degrees north of the Equator, will see the sun pass straight overhead at noon.

Six months from now the sun will reach its southern extreme and pass overhead for people on the Tropic of Capricorn, and northerners will experience their shortest days of the year, at the winter solstice.

The sun’s angle relative to Earth’s equator changes so gradually close to the solstices that, without instruments, the shift is difficult to perceive for about 10 days. This is the origin of the word solstice, which means “solar standstill.”

It's worth noting, though, that other planets' seasons don't climatically equal those on Earth for a few reasons. First, planets vary in their axial tilts: Venus's axis of rotation is tilted by just three degrees, so there's much less seasonal difference between the Venusian summer and winter solstices than those on Earth. In addition, planets such as Mars have less circular orbits than Earth's, which means that their distances from the sun vary more dramatically than ours do, with correspondingly bigger effects on seasonal temperature.