The SSR concept was developed by the World Economic Forum’s Global Future Council on Space Technologies.

By voluntarily taking part in the new SSR system, spacecraft operators, launch service providers and satellite manufacturers will be able to secure one of four levels of certification which they can share externally to show their mission’s level of sustainability. This will increase transparency and approach to debris mitigation, without disclosing mission-sensitive or proprietary information.

With more satellites being launched each year, the risk of accidents and the creation of more debris continues to rise. This has created the need for a global system to foster the long-term sustainability of the space environment.

India has scored 90.32% in United Nation’s Economic and Social Commission for Asia Pacific's (UNESCAP) latest Global Survey on Digital and Sustainable Trade Facilitation. The Survey hails this as a remarkable jump from 78.49% in 2019.

After evaluation of 143 economies, the 2021 Survey has highlighted India's significant improvement in the scores on all 5 key indicators, as follows:

The Survey notes that India is the best performing country when compared to South and South West Asia region (63.12%) and Asia Pacific region (65.85%).

The 2011-2020 Aichi Plan failed to achieve a single biodiversity target. Over the past two years, scientists, experts and government officials have been working on a framework to be adopted in Kunming China at the UN CBD COP15 that will set targets on how we manage nature through to 2030. While the targets, like Paris Agreement, are not binding for businesses – they signal the government ambition and prioritization of activities to fight the crisis of biodiversity loss.

The Secretariat of the UN Convention on Biological Diversity (CBD) has released the first draft of a new global biodiversity framework, to guide actions worldwide through 2030, to preserve and protect nature and its essential services to people.

The Framework comprises 21 targets and 10 ‘milestones’ proposed for 2030, en route to ‘living in harmony with nature’ by 2050. Few targets are:

The framework’s theory of change acknowledges that its implementation will require the engagement of actors beyond governments to include, among others: 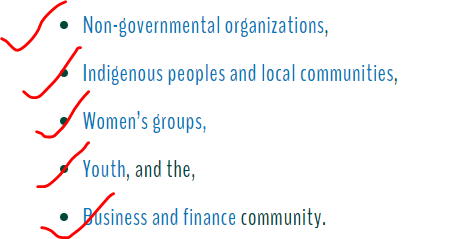 On July 02, 2021, the Government of India announced the launch of six technology innovation platforms to boost the domestic manufacturing sector and develop innovative, indigenous technologies to put India at par with the global counterparts.

The six platforms launched are as follows:

These platforms are likely to aid in converging India's technical resources on one platform and serving as a common point for varied industries to kickstart and expedite discovery and crowdsourcing of technological challenges faced by them.

The programme is for enhancing technological capabilities of the Indian automotive sector by sharing knowledge and experience and making the industry self-reliant.

BHEL, a Government of India undertaking and an engineering & manufacturing company, has rolled out a technology innovation platform—SanRachna. It is an open technology platform developed to identify inadequacies in the current technologies used in India.

ARAI, a renowned automotive R&D organisation under the Government of India, built a platform—TechNovuus—for cross-domain collaboration. The platform will provide a medium to intellectuals to contribute their knowledge on development of new technologies and innovations and shape the future of mobility.

HMT, a Government of India undertaking and a machine tools manufacturing company, introduced a technology innovation platform—HMT TechPort. The platform has been created to boost the machine tools industry by aggregating technology and innovation ideas through collaborative approaches.

DRISHTI – CMTI (Design, Research and Innovation by Harvesting Science and Technology for Industries)

Each state has a fixed number of RS seats and 1/3rd of them come up for election every 2 years.

Article 80 of the constitution stipulates the maximum size of the house. The number of elected RS members from the States & UTs cannot be more than 238. Apart from the elected members, 12 members can be nominated by the President of India. Currently there are 233 elected members and 12 nominated members.

The system of election of members to the Rajya Sabha is by proportional representation by means of the single transferable vote (STV). The STV system is similar to the one followed in the election to the President of India and members of the legislative council in states. The vote is transferred from one candidate to another in any of the two situations mentioned below.

The minimum number of valid votes required for a candidate to be declared elected is called the quota. The quota calculation depends on the number of seats to be filled.

At an election where only one seat is to be filled, every ballot paper is deemed to be of the value of one and the quota is calculated by adding the values credited to all the candidates and dividing the total by two and adding one to the quotient, ignoring the remainder, if any, and the resulting number is the quota. It has to be:

At an election where more than one seat is to be filled, every ballot paper is deemed to be of the value of 100 and the quota is determined by adding the values credited to all the candidates and dividing the total by a number which exceeds by one the number of vacancies to be filled and adding one to the quotient ignoring the remainder, if any, and the resulting number is the quota.

For instance, if 3 candidates are to be elected and the total number of voters who participated in the poll is 176, the quota is

If none of the candidates get the required quota of first preference votes, then a process of vote transfer takes place, successively eliminating those who get the least number of first preferential votes.