With the latest additions, there are a total of 40 World Heritage Sites in UNESCO’s list from India which includes 32 cultural, 7 natural and one mixed property.

When was the World Heritage Convention created?

World Heritage Convention was created in 1972 to identify and protect the world’s natural and cultural heritage considered to be of ‘Outstanding Universal Value’ in the lines that some places are so important that their protection is not only the responsibility of a single nation, but is also the duty of the international community as a whole; and not only for this generation, but for all those to come. India ratified the convention on 14 November 1977.

What is the procedure for inscribing a site in the list?

Preparation of tentative list- The country or ‘State Party’ must prepare a list of the important natural and cultural heritage sites that are located within the country’s boundaries, which can be submitted for inclusion as a World Heritage site. This inventory is called a ‘Tentative list’ and can be updated from time to time. Only properties listed in the tentative list will be considered for inscription by the World Heritage Committee.

Evaluation by advisory bodies– The International Council on Monuments and Sites (ICOMOS), and the International Union for Conservation of Nature (IUCN) must independently evaluate the cultural and natural sites which have been proposed and submit their evaluations to the World Heritage Committee.

The latest Operational Guidelines was modified in 2019 during the previous session of the World Heritage Committee. 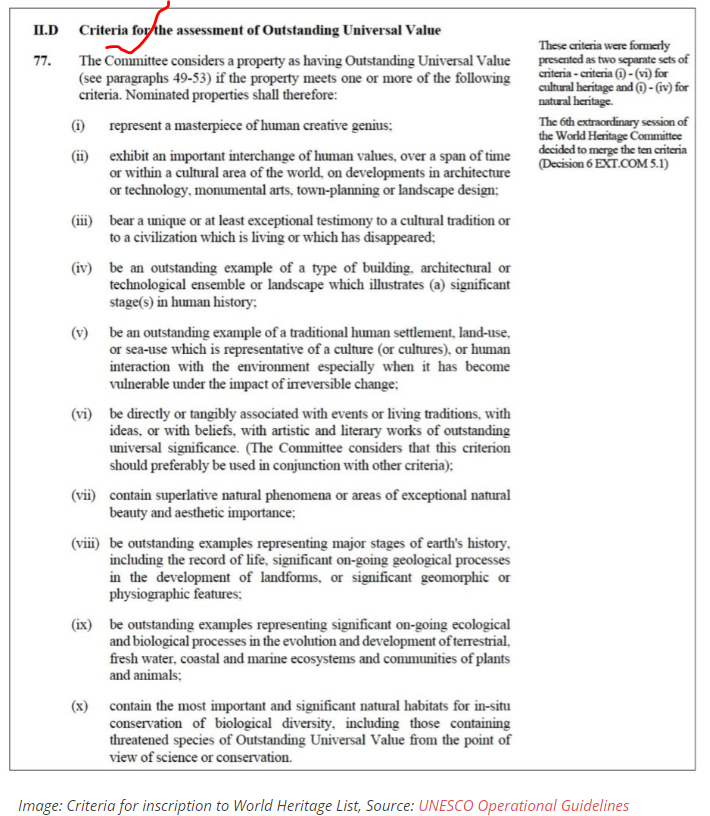 Which are the sites from India on the World Heritage List?

Italy (57) has the greatest number of World Heritage Sites followed by China (56) as per UNESCO’s dashboard as of 27 July 2021. India continues to be ranked sixth in the world in terms of the number of heritage sites. Spain, Germany, and France have more than 40 sites each. India had 40 sites inscribed.

What happens if the sites are not taken care of?

With inscription comes the responsibility to look after the property. If the countries do not adhere to UNESCO’s protocols, then the countries are sent a warning letter. If the country continues to be non-compliant, then UNESCO adds the property to the UNESCO’s ‘List of World Heritage in Danger’, also referred to as the ‘Danger List’, prior to getting delisted.

Last year the IBC 2016 was amended wherein the default limit was increased to Rs. 1 crore (from Rs. 1 lakh earlier) for IBC 2016 to be applicable.

But in case of "Pre-Packaged Insolvency Resolution Process (PIRP), during the PIRP, the management of the company will remain with the owners of the Debtor (MSME company). AND no other "Resolution Applicant" will be allowed to submit the Bid/plan for resolution of the defaulted MSME company (advantage for MSME owners) OTHER than the owners of the MSME company (debtor) but it should be approved by 2/3 of the creditors by value.

PIRP is applicable if an MSME has taken loan and the default is of less than Rs. 1 crore. 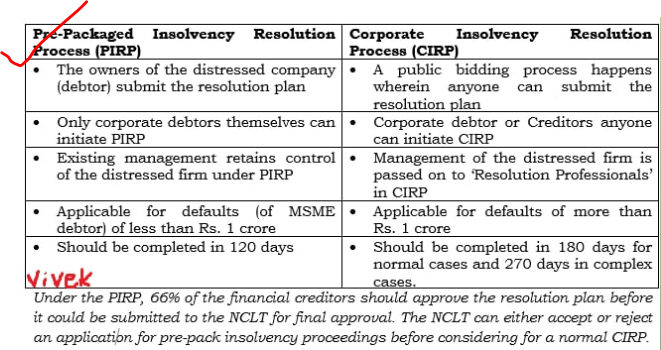 A new capacity building initiative on ‘Making water sensitive cities in Ganga basin’ aimed at improving river health/flows was launched by National Mission for Clean Ganga (NMCG) in association with Centre for Science and Environment (CSE).

The aim of the program is capacity building and action research for promoting sustainable urban water management for improved river health in Ganga basin cities.

National Mission for Clean Ganga (NMCG), we have explained each article in detail in previous section.

The Union Cabinet approved amendment to the DICGC Act to provide account holders access to up to Rs 5 lakh funds within 90 days of a bank coming under moratorium to ensure timely support to depositors.

Deposit Insurance and Credit Guarantee Corporation (DICGC) provides insurance to the depositor’s money in banks. If a bank goes bankrupt then people are insured of Rs. 5 lakh amount (including principal plus interest) per bank. So, if someone has an account with Axis bank with Rs. 20 lakh deposits. he will get only Rs. 5 lakhs. And if someone has four accounts in Axis each having Rs. 5 lakhs then only he will get only Rs. 5 lakhs in total. This limit was increased to Rs. 5 lakhs from Rs. 1 lakh last year. But it used to take a lot of time for depositors generally 8 to 10 years to get their money back only after the completion of the liquidation procedure of the bank.

Now, what Cabinet has approved yesterday is (and that was also promised in this year budget) ... If a bank has not gone bankrupt but is not doing well and RBI has imposed moratorium/restrictions on withdrawal of deposits to improve the condition of the bank (by bringing in change of management and other measures) ... then in that case also DICGC will have to pay to depositors Rs. 5 lakhs (maximum, depending on what is in your account) within 90 days. This was a major issue for depositors as in the last few years several banks had cases related to fraud and were not doing well and RBI imposed moratorium/restrictions on public deposit withdrawal.

For the above two cases banks pay premium to DICGC. Basically, DICGC Act compels all the banks (except few cooperative banks like which are not regulated by RBI and do not fall under Banking Regulation Act 1949... for details check the book) to purchase insurance for their depositors from DICGC by paying some premium to DICGC. (This is a "regulation of banks" function of RBI).

The University Grants Commission (UGC) notified the Academic Bank of Credits (ABC), an academic service mechanism for storing and transferring of academic credits of a student. The scheme is in line with the new National Education Policy.

The ABC will provide the opportunity for students to tailor their degrees or make specific modifications or specialisations rather than undergoing the rigid, regularly prescribed degree or courses of a single university or autonomous college. It will also permit students to choose a pace for their studies along with the associated logistics and costs, the notification says.

Similar to a bank account, the credit bank will be a repository where students’ academic credits — calculated on the basis of classwork and tutorials — will be stored. Simply put, with the help of ABC, a student can avail multiple entry and exit options in higher education institutions and opt for a tailor-made degree. They can choose to study one course in a year in one institution and switch to another one the next year.

ABC shall be established, on the lines of the National Academic Depository (NAD), which stores a student’s academic documents and shall have a website providing all details of ABC and its operational mechanism for the use of all stakeholders of higher education.