Government policies and interventions for development in various sectors and issues arising out of their design and implementation.

COVID-19 has hit the Indian Economy very hard and brought many lacunae to the forefront. Though government is taking multiple steps to boost the economy, there measures are largely insufficient. So, what needs to be done? The article covers this aspect in a comprehensive way.

Explained Ideas: Why exports are the way forward for the Indian economy: Indian Express

The article talks about the post COVID reforms that should be taken up in India. The most appropriate way forward is encouraging the exports. To know, what is the potential? And what are the constraints in this direction? Read the article carefully.

A recent report that studied the performance of the G-20 nations so far on the Paris pact’s commitments note that India is the only nation that is on track to meet the targets. A matter of pride to India. At the same time, a cause of concern as well. Because, tackling climate change and global warming issues is not possible without co-operation at International level and the following of rules and protocols by all in true letter and spirit. A very helpful article for mains.

For those who don’t have access to Business Standard newspaper, the whole article is provided below. Do read it without fail.

Manufacturing made up 27.5 per cent of India’s gross domestic product (GDP) in 2019, lowest in two decades, showing the share of the sector continues to shrink in the economy despite the government’s Make-in-India push. This makes India one of the least industrialised countries in Asia with the exception of Pakistan, and, Nepal.

The industrial and manufacturing sector’s share is down 250 basis points (bps) over the past five years. It accounted for 29.3 per cent of the country’s GDP three years ago and 30 per cent in 2014. One basis point is one-hundredth of a per cent.

In Asia, the industrial sector accounted for 30.8 per cent of the countries’ GDP on an average.

In South Asia, Bangladesh and Sri Lanka now generate a greater portion of their GDP from the industrial sector than India, according to the data from the Asian Development Bank. 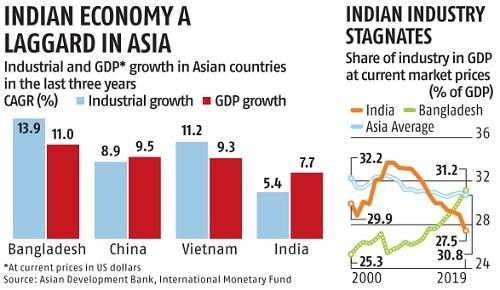 The data suggests that while India’s industrial sector has been a laggard since the 2008 global financial crisis, its decline quickened in the past three years. Between 2016 and 2019, the sector’s share in the economy declined by 190 bps, accounting for three-fourth of all decline over the past five years. The period coincides with the government’s demonetisation decision in November 2016 and the roll-out of the goods and services tax in July 2017.

In the past three years, India’s industrial output — including manufacturing, mining, construction, electricity generation and utilities — grew just 17 per cent cumulatively in dollar terms, a compound annual growth rate (CAGR) of 5.4 per cent.

In the same period, the industrial output in Bangladesh jumped 48 per cent, while it’s up 38 per cent in Vietnam, and 29 per cent in China.

A continued slowdown in industrial growth has made the Indian economy a laggard in Asia. In the last three years, India’s nominal GDP in dollar terms grew at a CAGR of 7.7 per cent, underperforming Bangladesh (11 per cent CAGR), China (9.5 per cent) and Vietnam (9.3 per cent).

Economists are not surprised given the continued sluggishness in the Index of Industrial Production (IIP).

“There was a time when IIP used to grow 8-9 per cent per annum. Now we rejoice if it grows above 3 per cent. Since 2014, IIP growth has rarely crossed the 4 per cent mark,” says Madan Sabnavis, head economist at CARE Ratings According to him, the industry faces a demand problem, which has led to lower production, lack of fresh investment, and fewer jobs all of which again leads to lower demand.

Economists say a continued slide in the industrial GDP will make it tough for India to push up its economic growth and catch up with China or fast-growing peers like Bangladesh and Vietnam.

“A faster growth in industry and manufacturing is necessary for India to generate more jobs and to improve the living standards and per capita income. There is a limit to how much you can grow only on the basis of agriculture and service sectors,” says Devendra Pant, chief economist at India Ratings & Research.

Economists say a sluggish growth in the industry will ultimately hit the growth in farm and service sectors, as they are linked through the need for raw materials, jobs and post-production activities.

Send To My Bookmarks