A big report. So many unnecessary things. But we will cover only few important headings important for exam.

The increase in inmates and prison space are not proportional 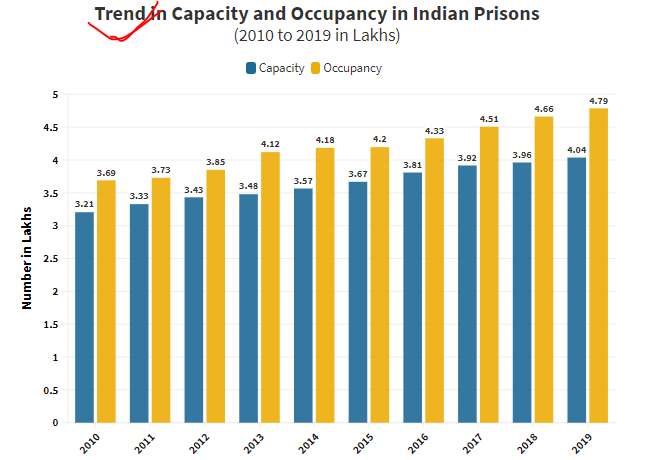 Prisons in 19 states were overcrowded

There is wide variation in prison occupancy ratio across different states. The prisons in 19 States were overcrowded by the end of 2019 and in seven of these, the occupancy ratio was above 150%. Delhi had reported the highest occupancy ratio in 2019 with close to 175% followed by Uttar Pradesh with 168% and Uttarakhand with 159%. 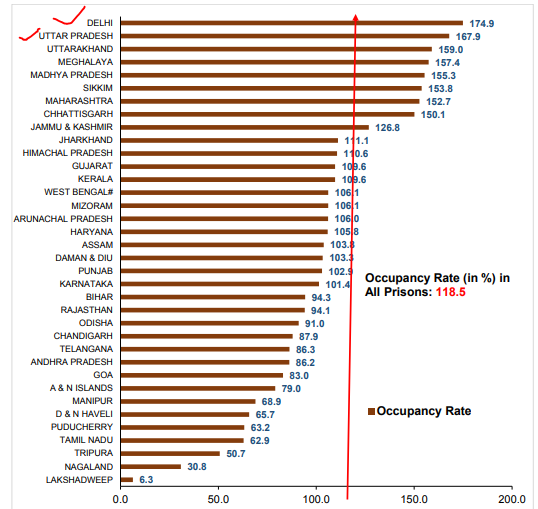 Almost 70% of the inmates in Indian prisons are under trials 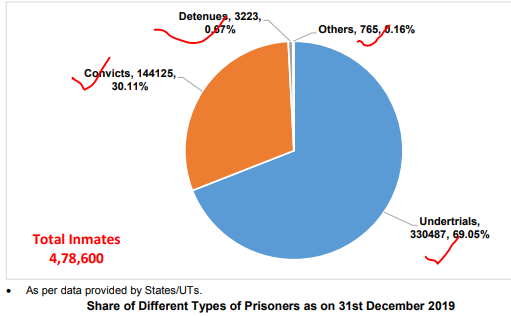 Undertrials are those who are being held in custody while the trial for the crime is pending. In the last decade, there has been a marginal increase in the percentage of undertrials being held in prisons, from 65% in 2010 to 69% in 2019.

According to the latest response in the Lok Sabha in July 2019 regarding the overcrowding of prisons, the Ministry of Home Affairs (MHA) stated that administration and management of prisons falls under the purview of the States. Further, MHA stated that it has issued advisories to the States and UTs for taking steps to provide free legal aid to undertrials and setting up Lok Adalats/Special courts in prisons for reviewing their cases. 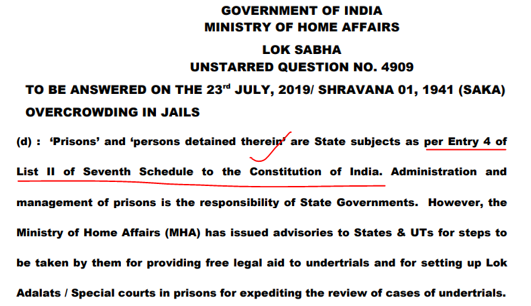 As per the report, it is conformed that various initiatives, such as legal defence, interviews with lawyers, etc. National Legal Services Authority free legal services to undertrial prisoners through legal service clinics failed to decongest the prison.

Needs a complete overhaul of existing laws to prosecute prisoners and infrastructure change in prisoners. Even United Nations has devised strategies for reducing overcrowding in prisons, as this is a global issue and not limited to India. These measures include:

Now, since it is a draft, just know basics about this. Don’t go in unnecessary details. 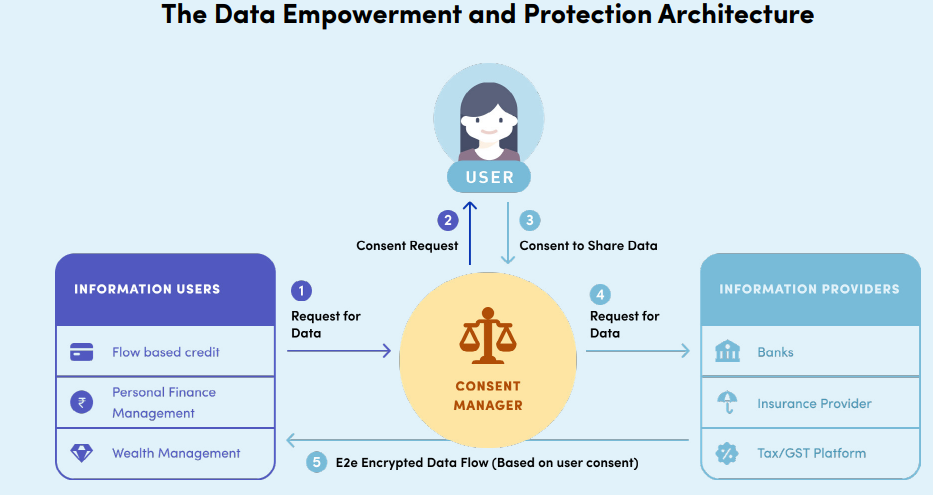 Implementation: RBI, SEBI, IRDAI, PFRDA and the Ministry of Finance will implement this model.

If portability and control of data could allow an MSME owner to digitally share proof of the business’ regular tax (GST) payments or receivables invoices easily, a bank could design and offer working capital loans based on demonstrated ability to repay (known as flow based lending) rather than only offering bank loans backed by assets or collateral.

DEPA is also being launched in the telecom sector following a Telecom Regulatory Authority of India (TRAI) consultation report on privacy released in July 2018.

The first major government department to become a Government Information Provider will be Goods and Services Tax (GST). In future, departments with data on individuals and MSMEs could adopt the specifications to improve the ease of doing business or create greater data portability of individual education, jobs, or transaction data.

National Health Authority which has been tasked with implementing the National Digital Health Mission, is piloting the DEPA architecture for healthcare data.

The Ministry of Skill Development and Entrepreneurship is encouraging adoption of a digital skill credential that could be used to address low data portability in employment by sharing verified information on work experience or educational training.

A new species of blind, underground ant from Goa

A new species of ant has emerged from the leaf litter at Netravali Wildlife Sanctuary in Goa. This underground-dwelling species turned up as part of a statewide survey of ants in the state.

The new species, Vaibhav’s Protanilla (Protanilla flamma) belongs to the genus Protanilla, a rare group of ants of which only 12 species are known worldwide. This discovery from Goa is the 13th species.

The species Vaibhav’s Protanilla is very small, measuring just 2.5 mm in length, yellow in colour, and is completely blind. The ant uses just chemical signals and touch response for navigation in their dark subterranean world. These ants are presumed to live in small-sized colonies and being exclusive predators of other smaller insects.

Ants play an important role in a forest by maintaining soil fertility, decomposition of organic matter, soil aeration, improving water percolation, and maintaining the population of other insects. A lot of such activities are done by hypogene ants, the group to which this newly described ant belongs. Hypogene ants are a group about which we know very less, so much so that we still do not know what all species comprise this group.

Watch this: Butterfly-Ant relationship. Not from exam purpose.

Iran signed the nuclear deal in 2015 with the United States, Germany, France, Britain, China and Russia. Known as the Joint Comprehensive Plan of Action, or JCPOA, it allows Iran only to keep a stockpile of 202.8 kilograms (447 pounds). However, as per IAEA reports, Iran continues to increase its stockpile of enriched uranium in violation of limitations set in the deal.

Why this oversight is necessary?

Now, what we will write below is the only thing you have to read about IAEA. Everything will be covered.

The International Atomic Energy Agency is the world's central intergovernmental forum for scientific and technical co-operation in the nuclear field. It works for the safe, secure and peaceful uses of nuclear science and technology, contributing to international peace and security and the United Nations' Sustainable Development Goals.

The Statute of the IAEA was approved on 23 October 1956 by the Conference on the Statute of the International Atomic Energy Agency, which was held at the Headquarters of the United Nations. It came into force on 29 July 1957.

The IAEA was created in 1957 in response to the deep fears and expectations generated by the discoveries and diverse uses of nuclear technology. The Agency’s genesis was U.S. President Eisenhower’s “Atoms for Peace” address to the General Assembly of the United Nations on 8 December 1953.

Function of this Agency: 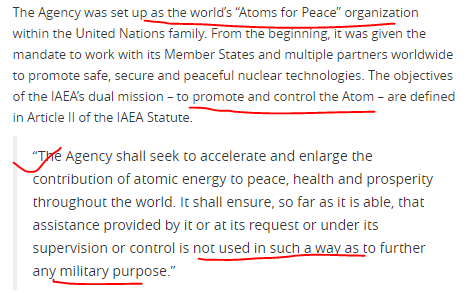 The IAEA’s policy-making bodies decide on the Agency’s programmes and budgets. They comprise the General Conference of all Member States and the 35-member Board of Governors.

So, India is a member? Yes. 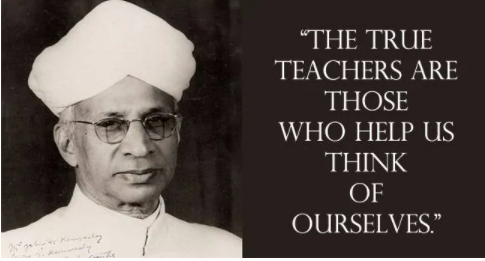 His Philosophy and Literary works: