Don’t need to remember. Just see once all 14 items. 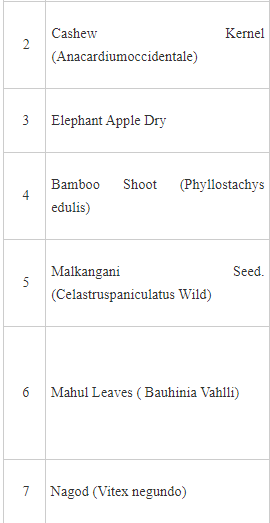 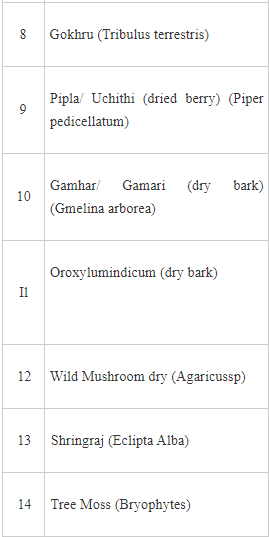 A small introduction to connect with topic.

Over the past year, due to the unprecedented crisis caused by the ongoing pandemic, the lives and livelihoods of people across all segments, and in particular, the disadvantaged tribals, across the country have been severely disrupted.  At such a time, the ‘Mechanism for Marketing of Minor Forest Produce (MFP) through Minimum Support Price (MSP) & Development of Value Chain for MFP’ has come as a beacon of change.

Under the scheme "Mechanism for Marketing of Minor Forest Produce through Minimum Support Price and development of Value chain for MFP" Minimum Support Price (MSP) for Minor Forest Produce (MFP) has been fixed for select MFP. The scheme is designed as a social safety net for improvement of livelihood of MFP gatherers by providing them fair price for the MFPs they collect.

TRIFED, as the apex national organisation involved in the improvement of the livelihood and empowerment of these tribal people, is the nodal agency for the implementation of the scheme. The Van Dhan tribal start-ups, also a component of the same scheme, further complements MSP beautifully and has emerged as a source of employment generation for tribal gatherers and forest dwellers and the home-bound tribal artisans.

The Minor Forest Produce (MFP), also known as Non-Timber Forest Produce (NTFP), is a major source of livelihood and provides essential food, nutrition, medicinal needs and cash income to a large number of STs who live in and around forests. However, MFP production is highly dispersed spatially because of the poor accessibility of these areas and competitive market not having evolved. Consequently, MFP gatherers who are mostly poor are unable to bargain for fair prices.

It is prepared by Transparency International.

What is the Corruption Perceptions Index (CPI)?

The CPI scores and ranks countries/territories based on how corrupt a country’s public sector is perceived to be by experts and business executives. It is a composite index, a combination of 13 surveys and assessments of corruption, collected by a variety of reputable institutions. The CPI is the most widely used indicator of corruption worldwide. 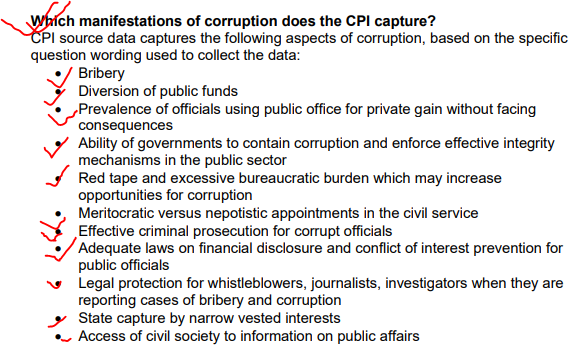 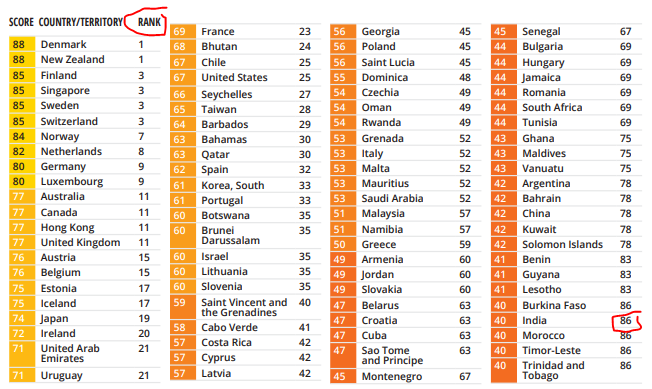 Much like the western countries, the scrappage policy comes into effect when a vehicle's lifecycle is complete. In general, a passenger vehicle has a life of 20 years and a commercial vehicle has a life of 15 years, after which they become obsolete and also starts polluting the environment at a greater intensity than they would have been doing earlier. In western countries, these old vehicles are sent to scrapyards where they are dismantled and the steel used for making the body is crushed and recycled again. In India though, there's no such policy. Most of the vehicles either are on run currently polluting the environment or are lying at road sides.

As explained above, a vehicle should be scrapped at the end of its lifecycle so that they are stopped running on roads that will reduce air pollution. Also, getting off older vehicles will generate space for new vehicles, which will boost the sales in the otherwise battered and bruised Indian auto industry. As of now, there are no clear guidelines on the policy. However, what is understood from the Finance Minister's speech is that commercial vehicles older than 15 years and personal vehicles which are older than 20 are eligible for scrappage.

Will all vehicles over and above time limit will be scrapped?

What is Fitness Test?

A fitness test, much like Pollution Under Control (PUC) certificate test, determines the road worthiness of a vehicle and checks if the vehicle is harming the environment. But that's one aspect of it. Various other tests will be in place to check the quality of the vehicles. A fitness test, according to the Finance Minister, will be conducted at automated fitness centres. It is estimated that each fitness test will set you back by at least Rs 30,000-40,000 and a green cess will also be levied while renewing the vehicle registration. Govt is hoping that all these additional costs will dissuade vehicle owners from retaining the vehicle.

What benefit will i get from scrapping my vehicle?

While more details, such as incentives and monetary benefits will be disclosed once the policy is rolled out, industry experts are saying that in order to implement this policy successfully govt will have to offer good incentive scheme, else owners will flout the rules in hope of saving money.

The Finance Commission is a constitutional body formed by the President of India to give suggestions on centre-state financial relations.  The 15th Finance Commission (Chair: Mr. N. K. Singh) was required to submit two reports.  The first report, consisting of recommendations for the financial year 2020-21, was tabled in Parliament in February 2020.  The final report with recommendations for the 2021-26 period was tabled in Parliament on February 1, 2021.  Key recommendations in the report for 2021-26 include:

The share of states in the central taxes for the 2021-26 period is recommended to be 41%, same as that for 2020-21.  This is less than the 42% share recommended by the 14th Finance Commission for 2015-20 period.  The adjustment of 1% is to provide for the newly formed union territories of Jammu and Kashmir, and Ladakh from the resources of the centre.

Table below shows the criteria used by the Commission to determine each state’s share in central taxes, and the weight assigned to each criterion.  The criteria for distribution of central taxes among states for 2021-26 period is same as that for 2020-21.  However, the reference period for computing income distance and tax efforts are different (2015-18 for 2020-21 and 2016-19 for 2021-26), hence, the individual share of states may still change. 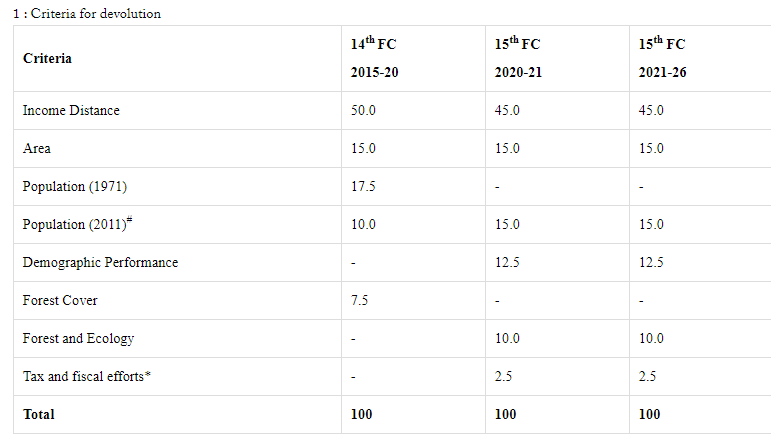 Demographic performance: The Terms of Reference of the Commission required it to use the population data of 2011 while making recommendations.  Accordingly, the Commission used 2011 population data for its recommendations. The demographic performance criterion has been used to reward efforts made by states in controlling their population.  States with a lower fertility ratio will be scored higher on this criterion.

Disaster risk management:  The Commission recommended retaining the existing cost-sharing patterns between the centre and states for disaster management funds.  The cost-sharing pattern between centre and states is: (i) 90:10 for north-eastern and Himalayan states, and (ii) 75:25 for all other states.  State disaster management funds will have a corpus of Rs 1.6 lakh crore (center’s share is Rs 1.2 lakh crore).

See below once devolution: 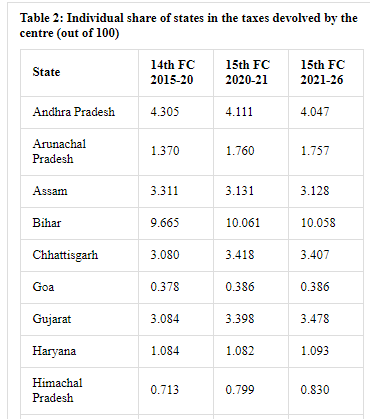 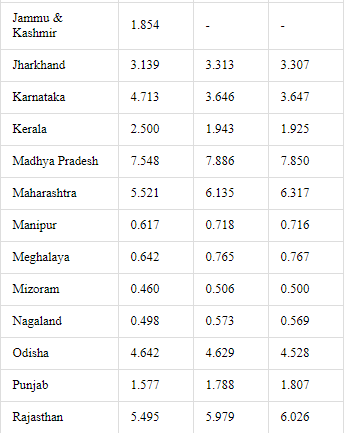 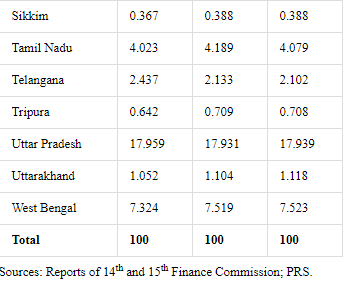