The State of the world’s land and water resources for food and agriculture (SOLAW 2021).

The Report published by Food and Agriculture Organization (FAO).

The report provided new information on the status of land, soil and water resources and evidence of the changing and alarming trends in resource use.

Santalum album. Linn commonly known as East Indian sandalwood or chandan belongs to the family Santalaceae. It is highly valuable and becoming endangered species. It is distributed all over the country and more than 90% lies in Karnataka and Tamil Nadu covering 8300 sq kms.

Sandalwood trees are a partial root parasite, and they don’t survive by themselves. They need hosts for their nutrition requirements. Therefore, the saplings are planted along with other trees. “As sandal trees do not grow exclusively and require the presence of other species, the Marayoor forest has a rich biodiversity.

Sandals have high oil content and huge amounts of hardwood; they are very much in demand globally.

Santalum album is an evergreen tree. It can grow to a height of 20 m and attain a girth of over 1.5 m. It flowers and fruits twice a year during March-April and September-October. Trees start flowering from 3 years of age. Seed production generally is good in one of the seasons. Certain trees flower only once a year and some do not flower regularly. About 6000 seeds make 1 kg. Seeds can be collected directly from the tree.

India has lost the dispute over subsidies of sugar exports at the World Trade Organization (WTO) with the dispute settlement panel ruling against the country on a complaint that Brazil, Australia, and Guatemala had filed.

Let see map of Guatemala: Its new to you. 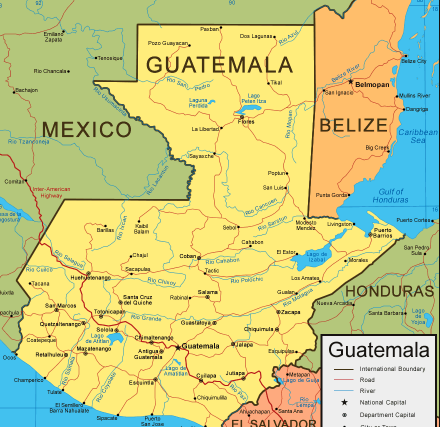 What is the dispute about??

There are two disputes.

The First one: You all know that in India a Fair and Remunerative Price (FRP) and State Advised Price (SAP) is announced at which the Sugar mills purchase the SUGARCANE from the Farmers. FRP is announced by the Centre but it is just recommendatory and States can announce their own SAP and Sugar mills are bound to purchase sugarcane not below this price. This price is generally high from the market price, so Central Govt. provides subsidy to Mill owners in different forms (one example is interest free loan to mill owners to pay for the farmers sugarcane dues).

The Second: As there is excess SUGAR production in India, so prices of sugar go down which hurts sugar mills as their input cost (FRP/SAP) always increases but output (SUGAR) prices go down due to excess production. So, Central Govt. announced 'Sugar Export Quota' for the sugar mills which basically asks sugar mills that if you will export a minimum quantity of sugar then you will get some subsidy in the form of per kg of exported sugar. This subsidy/benefit goes to Sugar Mills. So, basically Govt. is subsidizing sugar exports.

What the three countries claiming?

The three countries have raised both the above issues in WTO and they say it is against the WTO rules.

Regarding the first dispute: They say that WTO allows only 10% (of the value of production) subsidy to the farmers which is also called 'de-minimis' level, and India's subsidy is beyond that. But India is saying that give a proof regarding the same. In this case the burden of proof lies on the Complainant.

India is also saying that, it is giving subsidies only to 'poor farmers' which are actually exempted in WTO. But India does not categorise between poor and rich farmers and the subsidy (FRP/SAP) goes to all the farmers.  So, India assumes that all its farmers are poor.

And honestly speaking these two issues are so intermixed that its very difficult to segregate how much amount went to farmers as subsidy and how much to sugar mills. And when India is giving sugar mills an amount per kg of sugar export, it is basically benefitting farmers.