The Sessa Orchid Sanctuary, located in the West Kameng district of Arunachal Pradesh, was the first, and until recently the only, protected area in the country dedicated to the preservation of naturally growing orchids.

Notified in 1989, Currently, home to 236 naturally growing orchid species, at least five of them endemic including Epipogium sessanum, the one named after the sanctuary, Sessa is a  Conservation International Himalaya Biodiversity Hotspot area.

With the sanctuary spreading across indigenous community lands and the local tribal communities such as the Bugun, the Miji and the Hrusso possessing rich ethnobotanical traditions, the points converged to uplift the status of the protected area as part of the collaborative effort.

Not require to go much in detail.

Climate-smart agriculture (CSA) is an approach that helps guide actions to transform agri-food systems towards green and climate resilient practices.

CSA supports the FAO Strategic Framework 2022-2031 based on the Four Betters: better production, better nutrition, a better environment and a better life for all, leaving no one behind.

What constitutes a CSA practice is context-specific, depending on local socio-economic, environmental and climate change factors.

Collaborative approaches between the government agencies and the farmers, enabling mechanised farming and opening up to new technological inventions is the way to go in CSA. Big data and digital innovations, at various levels, can empower farmers to face climate-linked challenges in agriculture.

So, Currency in Circulation (CIC) is basically the hard cash (notes + coins) present in the economy.

Currency with Public (including business) is part of Money Supply. Currency with Banks, RBI and Govt. are not part of money supply.

The CIC/GDP ratio has increased in 2020-21 due to a rush for cash because of the Covid-Lockdown.

Below is the ratio of CIC/GDP for the last few years.

Patenting of plant varieties and the process in India

Recently, PepsiCo India Holdings Ltd.’s registration of a certain variety of potato was revoked in India by the ‘Protection of Plant Varieties and Farmers Rights Authority’ noting that the certificate of registration was granted on the basis of incorrect information furnished by the multinational company.

Why we need a legal system of plant variety protection?

Usually, improved varieties of seeds are used for an increase in yield alongside the use of other agricultural inputs such as fertilizers, and insecticides. To achieve better yields, improved seed varieties that can withstand environmental shocks and diseases are often used. These could help in multiple ways such as ensuring food security, supporting farmers to adapt to climate change among other things.  However, it takes a very long time, sometimes 15 years or more to develop a new variety with improved features, and an additional number of years for introducing the same into the market and for farmers to adopt it. In addition to the time required for developing these varieties, human and financial resources are also required, which calls for a legal system of plant variety protection.

Globally, the International Union for the Protection of New Varieties of Plants (UPOV) was established in 1961 ‘to provide and promote an effective system of plant variety protection, with the aim of encouraging the development of new varieties of plants, for the benefit of society.’ Following the UPOV Convention, many countries introduced a plant variety protection (PVP) system. UPOV had 78 members as of 03 November 2021, while India has initiated the procedure for acceding to the UPOV Convention.

In India, the Protection of Plant Variety and Farmers Right Act, 2001 (PPVFR Act) was enacted ‘to provide for the establishment of an effective system for the protection of plant varieties, the rights of farmers and plant breeders and to encourage the development of new varieties of plants’ and for giving effect to the TRIPS Agreement.

In simpler terms, the legislation grants intellectual property rights to breeders, farmers, and researchers who develop a new plant variety or develop the existing ones.

The Act established the Protection of Plant Varieties and Farmers’ Rights Authority, also referred to as Plant Authority, under the Ministry of Agriculture and Farmers Welfare. The functions of the Authority include the following:

Any person, group, or organization that claims to be the breeder of a plant variety can apply for the registration of plant variety. The applicant must submit a fixed amount of seed sample with prescribed germination percentage, physical purity, and phytosanitary standards for the authority to conduct tests. 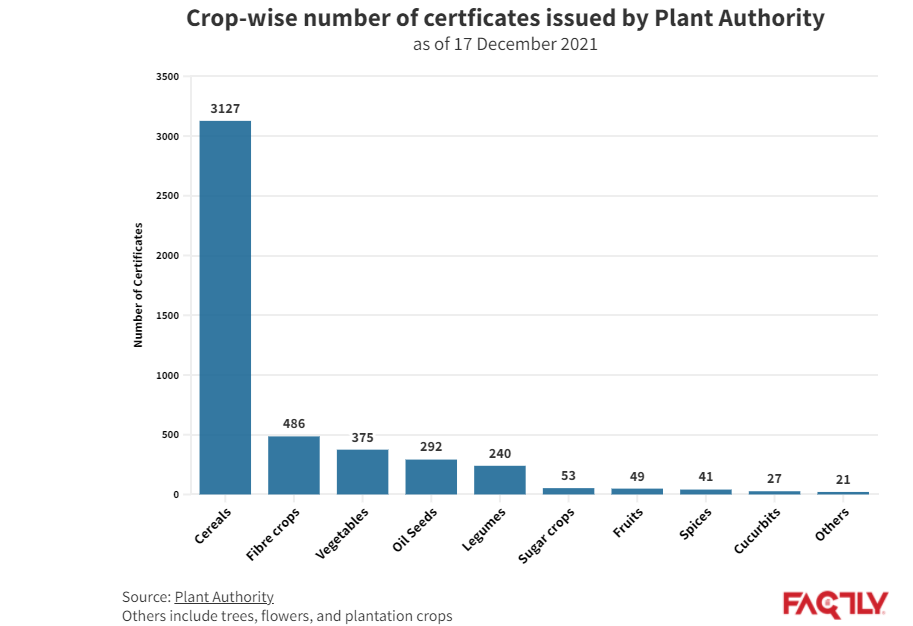 More than 40% of certificates issued to farmers 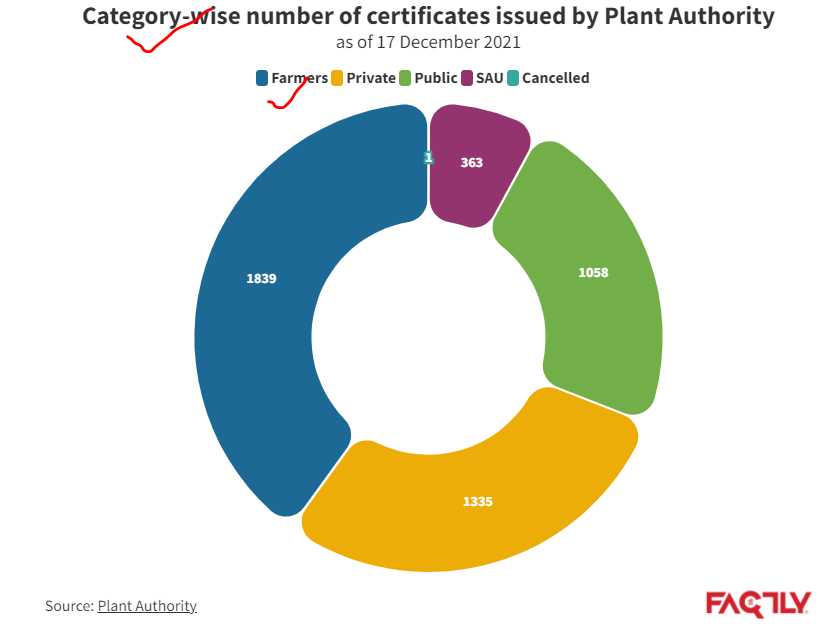