The New Development Bank (NDB) – established by BRICS (Brazil, Russia, India, China and South Africa) in 2015 – has admitted Egypt as a new member.

The NDB has already admitted Bangladesh, United Arab Emirates (UAE) and Uruguay as its new members. And Egypt is going to be the fourth new member. 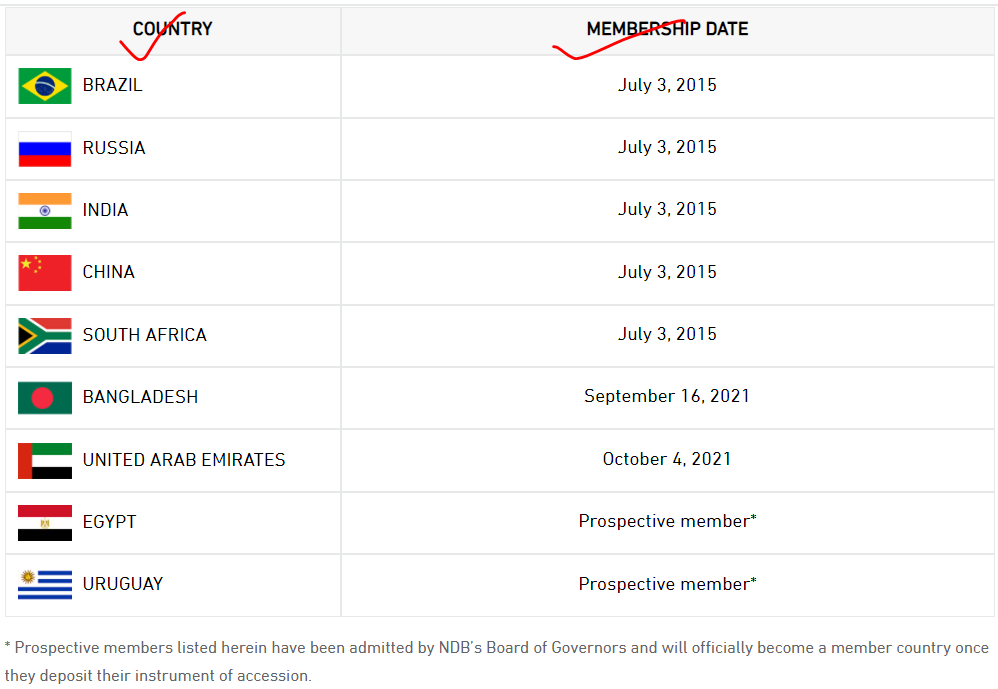 Membership of the Bank is open to members of the United Nations.

The Bank's Agreement specify that all members of the United Nations could be members of the Bank, however the share of the BRICS nations (Brazil, Russia, India, China and South Africa) can never be less than 55% of voting power.

First of all, see, how NDB was formed:

At the fourth BRICS Summit in New Delhi (2012), the leaders of Brazil, Russia, India, China and South Africa considered the possibility of setting up a new Development Bank to mobilize resources for infrastructure and sustainable development projects in BRICS and other emerging economies, as well as in developing countries. They directed Finance Ministers to examine the feasibility and viability of this initiative, to set up a joint working group for further study, and to report back by the next Summit in 2013.

Following the report from the Finance Ministers at the fifth BRICS summit in Durban (2013), the leaders agreed on the feasibility of establishing the New Development Bank and made the decision to do so. It was also agreed that the initial contribution to the Bank should be substantial and sufficient for it to be effective in financing infrastructure.

The perovskite material is derived from the calcium titanate (CaTiO3) compound, which has the molecular structure of the type ABX3. Perovskite materials have attracted wide attention because of the cubic lattice-nested octahedral layered structures and the unique optical, thermal, and electromagnetic properties.

Perovskite materials used in solar cells are a kind of organic-inorganic metal halide compound with the perovskite structure, in which Group A (methylammonium, CH3, MA+, or formamidinium, , FA+) is located in the vertex of the face-centred cubic lattice, and the metal cation B (Pb2+, Sn2+, etc.) and halogen anion X (Cl-, Br-, or I-, or a coexistence of several halogens) occupy the core and apex of the octahedra, respectively.

The materials with such a structure have the following four features.

Firstly, the materials possess excellent photoelectric properties, lower exciton binding energy, and high optical absorption coefficients (up to 104 cm−1). Secondly, perovskite as the light-absorbing layer can absorb solar energy efficiently. Thirdly, the materials possess a large dielectric constant and electrons and holes can be effectively transmitted and collected. Lastly, electrons and holes can be transmitted simultaneously and the transmission distance is up to 100 nm or more and even more than 1 μm.

The Indian defence sector is strategically important to India. In 2021-22, the government allocated Rs. 4,78,196 crore (US$ 62.8 billion) to defence, 1.5% higher than the previous year. This accounts for 2.15% of GDP and 13.73% of total central government expenditure. In 2020-21, India was the third largest military spender and had the second largest army globally. In view of these factors, coupled with access to nuclear weapons, India is recognised as a strong military power.

Make in India and Other Government Initiatives Boosting Defence Manufacturing

Under the Make in India initiative, the Indian government focuses on minimising import dependence, increasing domestic capacity and modernising armed forces. It plans to achieve these by scaling up domestic manufacturing capacity by promoting local Micro Small and Medium Enterprises (MSMEs) and bigger defence manufacturers and by inviting foreign manufacturers to start operations in India. Moreover, the government has announced various reforms on aerospace and defence manufacturing policy to provide a fillip to defence equipment manufacturers in India.

Some of the initiatives are as follows:

Defence Acquisition Procedure (DAP) 2020: The DAP 2020 formulates rules for procurement of newer technology defence equipment products and services to act as a catalyst for the Make in India efforts and MSMEs. Rules include reservation of specific categories for Indian vendors, higher usage of indigenous content, and indigenisation of design and development. Additionally, DAP focuses on improving the ‘ease of doing business’ by rationalising compliances and procedures with the aim of encouraging foreign manufacturers to set up operations in India.

Foreign Direct Investment (FDI): In 2020, the government allowed FDI not exceeding 74% under the Automatic Route. This would encourage foreign companies to invest in India, thus reducing import dependency.

Import Embargo: In 2020, the Ministry of Defence notified a list of 101 items that were banned for import. Additional items were included in 2021, taking the total number to 209. These items include artillery guns, light combat helicopters, ammunition, assault and sniper rifles, radars and sonar systems. The embargo on import would aid in indigenisation and lower imports, thus supporting private defence manufacturing companies in India under the Atmanirbhar Bharat campaign.

Modernisation of Military: The government is increasing its focus on modernisation of armed forces with the allocation of Rs. 1,35,060 crore (US$ 17.7 billion) in Budget 2021-22, up 19% from Rs. 1,13,734 crore (US$ 14.9 billion) last year, indicating that India is spending heavily on modernisation. Moreover, appointment of the Chief of Defence Staff (CDS) is expected to act as a catalyst in this process. Modernisation is crucial for facing the threats faced by India.

Make in India: The Make in India initiative is a significant trend driving supply-side growth in the defence manufacturing industry. The government has announced several reforms based on import substitution and ‘Make in India’ for incentivising capacity ramp-up, promoting MSMEs, banning imports, giving preference to Indian vendors and so on. Private defence manufacturing companies, in particular defence equipment manufacturing companies in India, have benefited from this initiative as it created greater demand opportunities. These reforms are helping to meet the Atmanirbhar Bharat objectives.

Technology Improvement: One of the reasons for India’s high level of import dependency is to gain access to newer technology defence products. However, this is changing with the government’s increasing contribution to R&D. During 2020-21, expenditure on defence R&D stood at Rs. 19,327 crore (US$ 2.5 billion), constituting 4% of the defence budget and 9% higher from the previous year.

Defence research is undertaken by the Defence Research and Development Organisation (DRDO), which is focusing on advanced technologies such as nanotechnology, artificial intelligence (AI), and quantum computing. The trend of high R&D spend is expected to continue and boost the defence manufacturing industry.

Foreign Collaboration: The Indian government is entering into collaborations and partnerships with foreign nations to provide an impetus to the defence manufacturing industry. Some of the deals are mentioned below.

Military Technology Cooperation: India and Russia also signed a deal for military technology cooperation over the next decade.

Predator Drones: India signed a deal worth US$ 3 billion with the US for supply of 30 multi-mission armed predator drones. These drones can remain airborne for 35 hours, and the missions include reconnaissance, surveillance and destruction of enemy targets.

Next-Generation Technologies: India and Israel have partnered to develop next-generation defence technologies such as AI, robotics and drones. The Bilateral Innovation Agreement (BIA) was signed between India’s DRDO and Israel’s Directorate of Defence Research and Development (DDR&D). 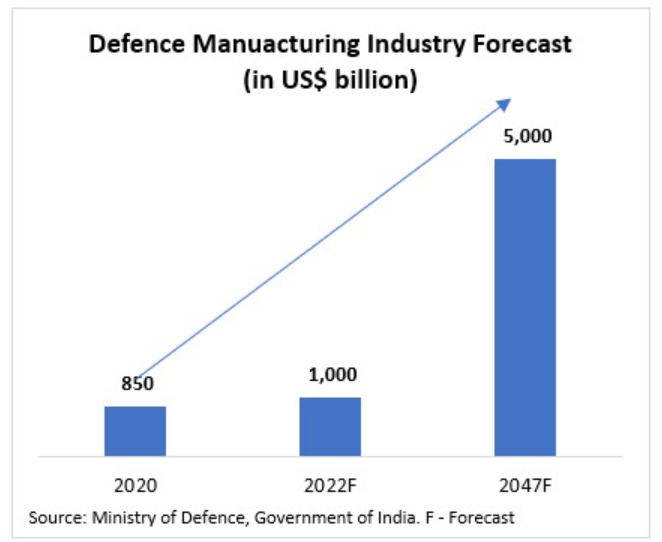