Just read few data. It will help you in Prelims and Mains both.

Tamil Nadu has declared India’s first dugong conservation reserve in the Gulf of Mannar and the adjacent Palk Bay on the southeast coast of India.

There are an estimated 200-250 dugongs left in the oceans, and among them, around 150 can be spotted in the Palk Bay and Gulf of Mannar which has now become the most significant surviving natural habitat for dugongs globally. 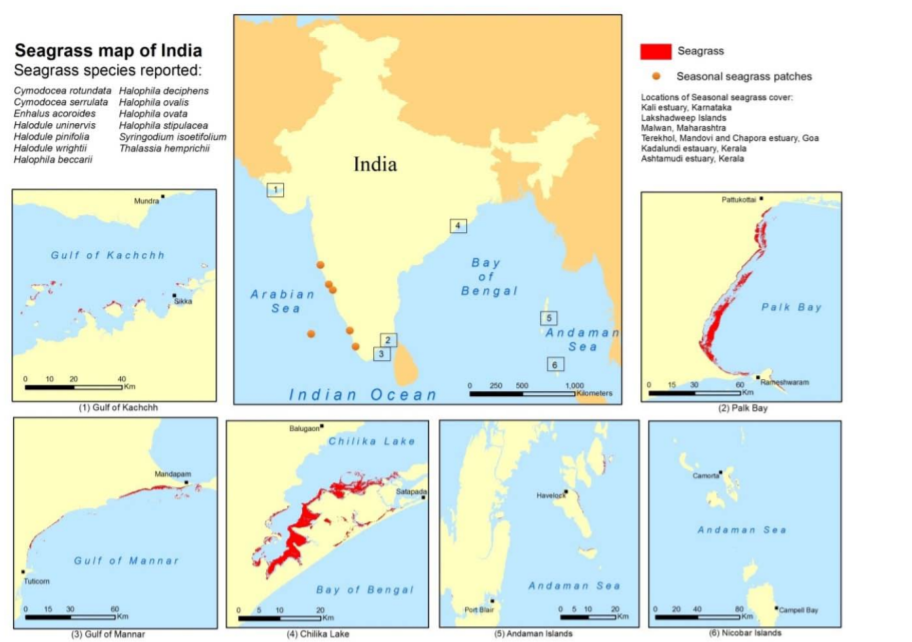 Conserving seagrass to protect the dugong

The dugong (Dugong dugon) is currently the only herbivorous marine mammal in the world and it feeds exclusively on seagrass. It can eat up to 40 kg of seagrass every day, making the plant crucial to the survival of the animal.

The dugong is listed as vulnerable in the IUCN Red List of Threatened Species.

They are protected in India under Schedule I of the Wild (Life) Protection Act, 1972.

Other than supporting dugongs, seagrass beds along the continental shelf play a vital role in protecting the fragile marine biodiversity of the Gulf of Mannar and Palk Bay, off the coast of Tamil Nadu in the southeast of India, and support the health of coastal ecosystems in the Bay of Bengal off the eastern coast of India.

These submerged flowering plants can usually be seen in shallow marine waters and they help enhance water quality by absorbing carbon dioxide and generating oxygen. They also serve as breeding grounds for many fish species.

While India has made significant progress in renewable energy capacity building, wind power has been largely neglected.

The state of Tamil Nadu has the highest installed wind capacity in India. It is home to 25 per cent of the nation’s wind power capacity.

Tamil Nadu has the oldest wind turbines, which date back to the 1990s. Due to their smaller hub heights (25-30 metres) and low capacities (<500 kilowatts), early machines are underutilised.

Due to the mechanical difficulties and inefficiencies associated with old turbines, their capacity utilisation factors (CUF) are often low (10-14 per cent). In the event of worn-out turbines, energy generation will decline, and developers will need to decide on optimising end-of-life machines.

Since land is finite, this can only be accomplished by repowering existing wind installations in Class I wind sites with high wind speeds and density.

The repowering process would generate large quantities of waste that would need to be managed sustainably. This is a challenge because of the strength, durability and mixed nature of the blades. Comprehensive policies related to decommissioning and recycling of components are urgently needed.

In terms of enabling repowering of older wind farms, the repowering policy has had no impact. Based on analysis, the reasons are as follows:

China’s Chang’e 5 lunar lander has found the first-ever on-site evidence of water on the surface of the moon, lending new evidence to the dryness of the satellite.

A device on-board the lunar lander measured the spectral reflectance of the regolith and the rock and detected water on the spot for the first time.

The study published on Saturday in the peer-reviewed journal Science Advances revealed that the lunar soil at the landing site contains less than 120 parts-per-million (ppm) water or 120 grams water per ton, and a light, vesicular rock carries 180 ppm, which are much drier than that on Earth.

The presence of water had been confirmed by remote observation but the lander has now detected signs of water in rocks and soil.

The Chang’e-5 spacecraft landed on one of the youngest mare basalts located at a mid-high latitude on the moon. It measured water on the spot and retrieved samples weighing 1,731 grams.