India’s agri exports crossed USD 50 billion for the year 2021-22, notwithstanding logistical challenges posed by COVID-19 pandemic in the form of high freight rates, container shortages, etc. Agricultural and Processed Food Products Export Development Authority (APEDA), which works under the Ministry of Commerce and Industry, has scripted a new history by exporting agricultural and processed food products to the tune of USD 25.6 billion,

which is 51 per cent of the India’s total agriculture exports of USD 50 billion.

Compared to total agricultural export, APEDA’s exports registered 16 per cent growth when it touched USD 25.6 billion in 2021-22 from USD 22.03 billion in 2020-21.  The highest growth rate recorded by APEDA products (more than 30 per cent) in 2021-22 corresponding to previous year may be seen from Graph-2. 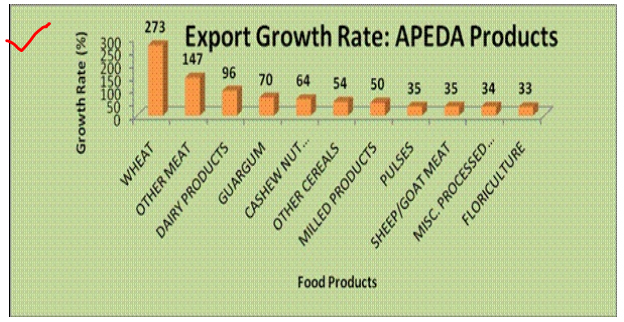 TRS are essentially a performance measurement tool for assessing the cargo clearance process of the international trade, as recommended by the World Trade Organization (WTO) under the Trade Facilitation Agreement (TFA) and the World Customs Organization (WCO).

It adopts average cargo release time, i.e., the time taken from the arrival of the cargo at the customs station to its eventual release for import or export, as the case may be.

The Department of Telecommunications (DoT) invites Expression of Interest for “5G Vertical Engagement and Partnership Program(VEPP)”initiative to build strong collaboration partnerships across 5G Use-case ecosystem stakeholders with velocity and with an exclusive emphasis to address User/Vertical Industry needs.

In order to multiply the 5G opportunities across the usage verticals, under the guidance of Secretary(Telecom), an Inter-Ministerial Committee chaired by Member(Technology), Digital Communications Commission is constituted to facilitate collaborative efforts across stakeholders.

Stakeholders who can Apply:

In order to give fillip to the 5G use case development program, the DoT in partnership with other Ministries & State Government Departments, Start-up Hubs would facilitate necessary approvals/ regulatory clearances to enable Use case prototyping/pilots/Demos/ trials at the User or Vertical industry premises. Required experimental spectrum would also will be facilitated on priority basis.

Rest You can understand on your own.

One incident which I would like to remind you that, when India was in crisis in 1991 March/April and we had only $1.2 billion of forex and the default was imminent on our foreign debt then rather than defaulting, we decided to give our gold to foreign banks and arranged dollars. And later on we brought our gold back.