Based on the information collected during the Periodic Labour Force Survey, the National Statistical Office released the ‘Migration in India (2020-21)’ report which contains estimates of indicators related to migration and temporary visitors.

b. Report of The Regulations Review Authority 2.0

In 2021, the RBI set up the Regulations Review Authority (RRA 2.0) with a view to streamline regulatory instructions and rationalize reporting requirements. In the present report, the RRA has given its recommendations on ease of compliance, reducing regulatory burden, streamlining of reporting mechanism, and accessibility to regulatory instructions based on consultations with both internal and external stakeholders.

The Periodic Labour Force Survey (PLFS) is carried out on an annual basis to estimate key employment and unemployment indicators such as unemployment rate, labour force participation, worker population ratio, in urban and rural areas. The latest report covering the period from July 2020 to June 2021 is the fourth annual report of the survey which was launched in 2017 by the National Statistical Office.

Prior to the launching of PLFS, employment and unemployment surveys were earlier conducted only once in five years as part of the National Sample Surveys. But now, the data is available at both quarterly and annual basis.

There is a desert in Tamil Nadu

Only the Thar comes to mind when we discuss deserts in India. The Thar or Great Indian Desert is located partly in Rajasthan and partly in the Punjab and Sindh provinces of Pakistan. 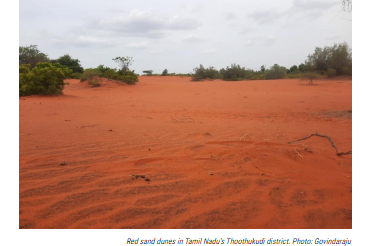 Most of us may not know the small desert situated in the state of Tamil Nadu. It consists of red sand dunes and is confined to Thoothukudi district.

The red dunes are called theri in Tamil. They consist of sediments dating back to the Quaternary Period and are made of marine deposits. They have very low water and nutrient retention capacity.

The study of the red sand dunes reveals the presence of heavy and light minerals.

The iron-rich heavy minerals like ilmenite, magnetite, garnet, hypersthene and rutile present in the soil had undergone leaching by surface water and were then oxidised because of the favourable semi-arid climatic conditions.

It was due to these processes that the dunes near Tiruchendur, a coastal town of Thoothukudi district are red-coloured.

The concept of Critical Information Infrastructure' under IT Act

What is the news?

The government has declared the IT resources of ICICI Bank as 'critical information infrastructure', implying any harm to it can have an impact on national security and any unauthorised person accessing it may be jailed for up to 10 years, according to an official notification.

"The Central Government hereby declares the computer resources relating to the Core Banking Solution, Real Time Gross Settlement and National Electronic Fund Transfer comprising Structured Financial Messaging Server, being Critical Information Infrastructure of the ICICI Bank, and the computer resources of its associated dependencies to be protected systems for the purpose of the said Act," the notification said.

What is Critical Information Infrastructure'?

The Information Technology Act of 2000 defines “Critical Information Infrastructure” as a “computer resource, the incapacitation or destruction of which shall have debilitating impact on national security, economy, public health or safety”.

The government, under the Act, has the power to declare any data, database, IT network or communications infrastructure as CII to protect that digital asset.

How are fireflies affected by light pollution?

Insects act in coordination with natural light regimes and are sensitive to changes in light intensity, wavelengths, sources and other factors. Nocturnal insects perform various activities such as foraging, reacting to predators, or navigating using the stars and moon.

For insects of the family Lampyridae, commonly known as fireflies, low light is needed for reproduction. However, this congregation of Lampyridae is affected by the increasing urban lights, impacting their numbers.

What happens when fireflies compete with artificial light?

Fireflies use their bioluminescence, a chemical reaction that produces light, for mating communication. Adults of one or both sexes (depending on species) emit specific flash patterns which are received by the other sex. During the mating season, fireflies flash late in the day, shortly after sunset, when light levels are low. High levels of artificial light can inhibit this signalling activity.

And world is getting brighter and it affects fireflies.

Fireflies are found in temperate and tropical regions in wetlands and marshes near wooded areas. Firefly adults are short-lived, with life spans ranging from a week to a few months. 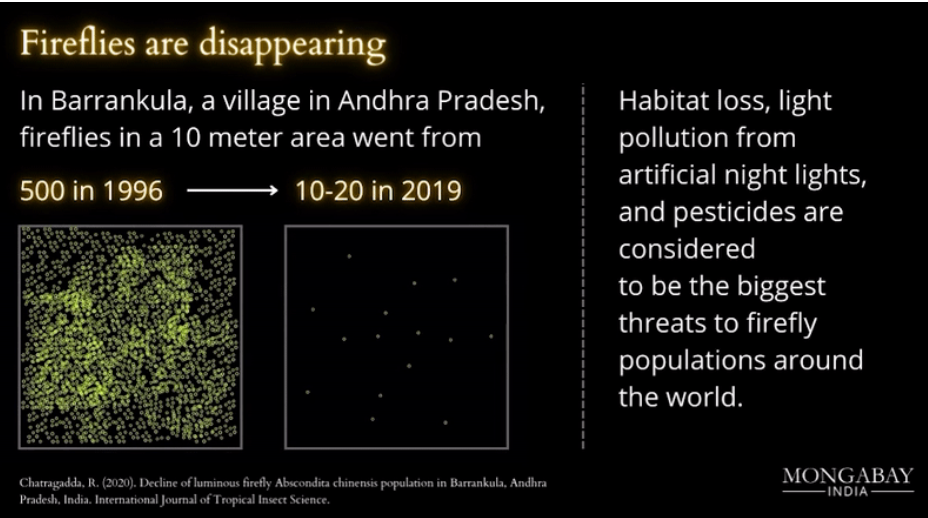 According to another survey in 2020, that attempted to understand the global perspective on firefly extinction threats, the most serious threats to fireflies noted by experts are habitat loss, light pollution from artificial light at night, and pesticides — in that order.

What is the role of fireflies in an ecosystem?