The Supreme Court on Friday held that the lion sculpture installed atop the new Parliament building under construction as part of the Central Vista project does not violate the State Emblem of India (Prohibition of Improper Use) Act, 2005.

On petitioner's submission that

However, the bench observed that there is no violation of the Act.

On 26.01.1950, the State Emblem was adopted as a symbol and seal of the newly formed Republic of India. The statute came into existence in 2005. It describes the State Emblem of Indian as an adaptation from the Sarnath Lion Capital of Ashoka which is preserved in the Sarnath Museum.

See some more provisions of the Act: 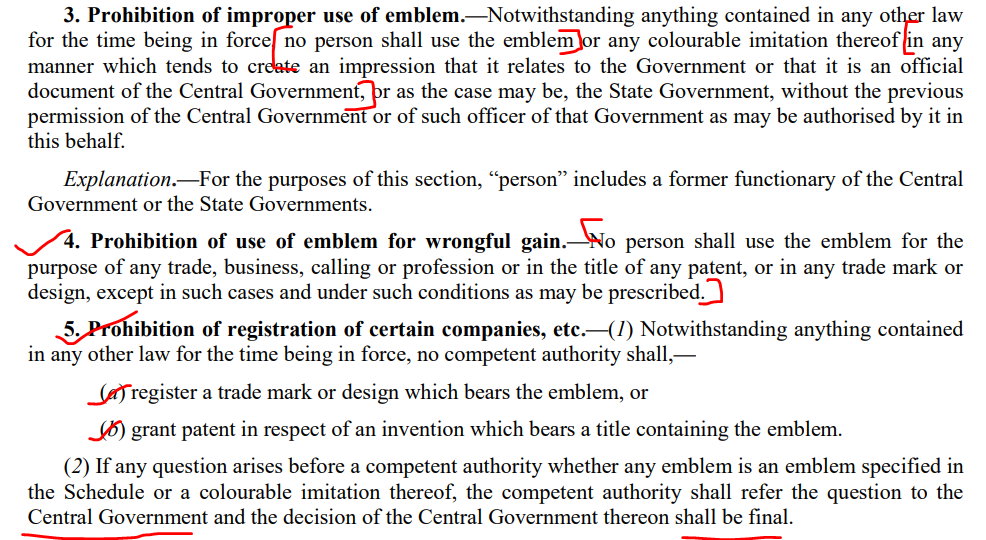 How disabled person's right to read is violates under Copyright Act?

On one hand, any specific media can always be distributed and released publicly with barely any technical barriers and on the other, a visually impaired person is finding it more difficult to adapt to this change. At least 180 million people are estimated to be suffering from some sort of visual impairment, with more than 18 million people in India.

To solve issues such as hacking, unlawful reproduction, and distribution, unlicensed use of media, etc., Publishers implement Digital Rights Management (hereinafter DRM) methods. It is a method of protecting digital media copyrights.

This strategy entails the deployment of technologies that restrict the reproduction and use of copyrighted content as well as proprietary software—for instance, disabling the copy function from their website, disallowing Screenshotting a website, or encrypting the content on the web.

Although DRM technology empowers publishers to exercise control over their content, it can also be used to undermine public rights. This props a dilemma. On one hand, there is a perpetual fight between an author's private rights, and on the other, the right to read for the public.

Employing DRMs upon already copyrighted content violates the fair use doctrine and restricts a visually impaired person's ability to access quality content. For instance, most visually impaired individuals use JAWS, which is a Microsoft Windows screen reader which makes it easier for people who have limited vision to utilise a Windows PC.

Under Section 121 of the US Copyright Act, non-profit organizations and government entities that offer services to individuals with visual impairments may create and distribute accessible copies of copyrighted works solely for their use. This has come due to US's obligation under the Marrakesh Treaty to Facilitate Access to Published Works for Persons Who Are Blind, Visually Impaired, or Otherwise Print Disabled (Marrakesh Treaty).

Challenges To Right to Read Under Indian Copyright Law:

In India, literary work is protected under Section14 of the Copyright Act, 1957 (the Act). Under Section 3 of the Act, publishing is defined as making work available to the general public by the distribution of copies or communication public.

So, publishing a literary work entail making it accessible to the general public through the distribution of copies or communication.

DRMs were introduced via the Copyright Amendment Act 2012 to limit the sharing, printing, or copying of content.

Section 65A states that anybody who circumvents any effective technical measure used to protect the rights provided by the Act with the intent of infringing on such requests is subject to imprisonment for up to two years as well as a fine.

Section 65B renders it an offence to delete or change digital rights information without authorization, as well as to distribute any copyright-protected work in which the digital rights data has been removed.

The Indian Copyright Act is more advanced than US's Copyright Act concerning its fair use provisions for the visually impaired. For instance, After the 2012 Amendment,

Sections 31B and Section 52(1)(zb) were included to do away with the need to obtain permission from publishers before translating their works into accessible versions for the benefit of people with disabilities on a non-profit model.

This rule is very broad and inclusive in its reach, and it includes certain safeguards against improper use among non-beneficiaries of the exemption.

However, the Act is still riddled with many issues, when it comes to the protection of rights of the visually impaired.

Section 27(f) of the Persons with Disability Act, 1995 obliges state governments to provide reading material for the upliftment of the disabled, however, there is no mention of enabling access rights to already published works in digital format across the Act.

The World Green Economy Summit (WGES) is one of the leading global forums on the green economy. It brings together world-class experts in critical sectors from around the world to directly focus on advancing the global green economy and sustainability agenda, achieving the UN Sustainable Development Goals

The WGES is the premier international platform to drive dialogue and action amongst industry stakeholders, and build partnerships and collaboration by connecting creative minds across different sectors.

The Dubai Declaration is a strategic commitment underlying the development of WGES.

Among the 46 sculptures, also is a Varah sculpture which is one of the largest.