Pitcher plants are carnivorous plants that attract, kill and digest insects. Found mainly in the state of Meghalaya, India’s only pitcher plant species Nepenthes khasiana is endangered, facing threats from mining, shifting cultivation, and excessive collection, among others.

India’s only known pitcher plant species Nepenthes khasiana is an evergreen shrub considered endemic to Meghalaya. But in 2016, it was reported in Dima Hasao district in the neighbouring state of Assam. It is mostly distributed in Meghalaya’s west and east Khasi Hills, west and south Garo Hills and Jaintia Hills at an altitude of about 1000 to 1500 metres. 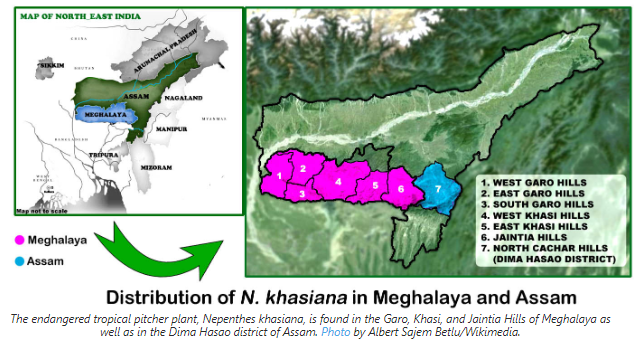 Pitcher plants are carnivorous plants that attract, kill and digest insects. The plants have evolved modified leaves consisting of jug-like pitchers, which function as pitfall traps that ‘hunt’ prey, mainly insects that curiously approach the pitcher rims and end up falling inside. Often unable to escape the slippery inner walls and sticky fluid inside the pitcher, the unfortunate victims die and enzymes at the bottom of the pitcher digest them to release nutrients needed by the plant.

Because it is at risk of extinction, the plant is included in the Negative List of Exports of the Government of India and it is a Schedule VI species under the Wildlife Protection Act, 1972. It is also listed under Appendix I of CITES (the Convention on International Trade in Endangered Species of Wild Fauna and Flora), prohibiting the trade of this species.

To conserve this species, methods such as tissue culture, micropropagation and germplasm preservation have been carried out primarily by government institutions. Villagers and students have been involved in various conservation initiatives.

The annual allocation of the Members of Parliament under MPLADS has increased over the years as shown in Table:

Ministry of Statistics and Programme Implementation, as the Nodal Ministry, is responsible for policy formulation, release of funds and monitoring the implementation of the Scheme.

One recent decision about MPLADS:

On 06 April 2020, the Union Cabinet took a decision to keep on hold the operation of MPLADS (Members of Parliament Local Area Development Scheme) for the next two years i.e. 2020-21 & 2020-21. This decision was taken in view of the COVID-19 situation in the country, where-in the funds earmarked for MPLADS, will be now at the disposal of Ministry of Finance and can be made available for COVID-19 related containment and relief efforts.

This decision would effectively result in the following.

Members from the opposition parties have said that it is a unliteral decision by government and such centralization can be detrimental to parliamentary democracy. There is also an opinion that earlier track record of Central Government, the delays in devolution funds, could hamper targeted local level works which MPLADS used to take care off.

However, what does the available data and information about MPLADS say about this scheme? 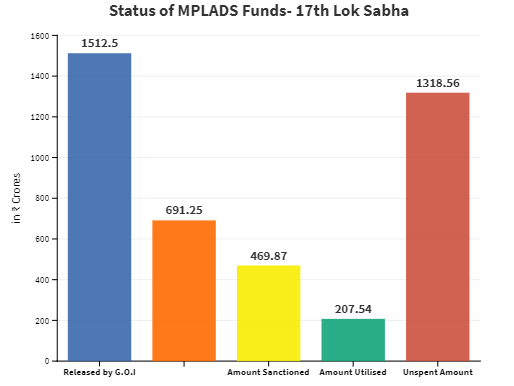 Nearly 2000 crores of unspent amount from the past three Lok Sabhas, with another 1600 crores unspent by Rajya Sabha members. 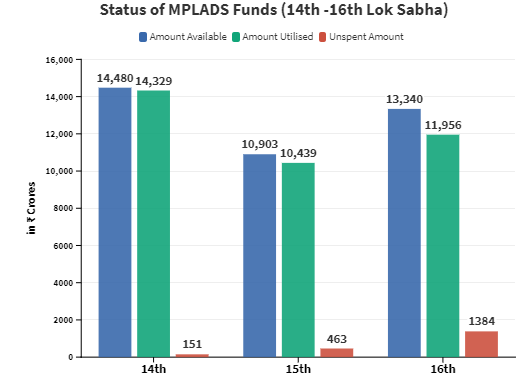 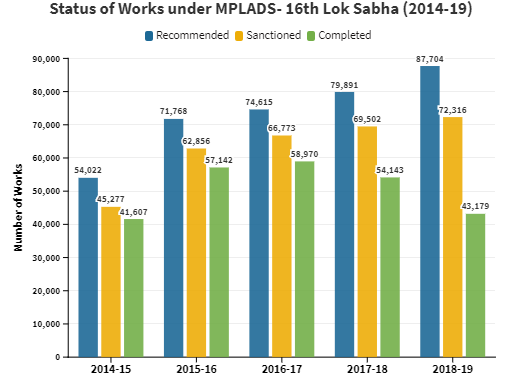 With the two-year suspension of MPLADS, it is a good opportunity to complete the pending works and utilize the unspent amount. It is also a good time to review the implementation of the MPLADS scheme, before charting the further course of the scheme.

Recently, the Intergovernmental Oceanographic Commission (IOC) of UNESCO (also known as UNESCO-IOC) has approved the recognition of two communities of Odisha viz., Venkatraipur and Noliasahi as Tsunami Ready Communities. With this recognition, India has become the first country in the Indian Ocean Region to achieve the honor from the UNESCO-IOC.

Odisha is the first state in India to have such recognised community.

It is a community performance-based programme initiated by the Intergovernmental Oceanographic Commission (IOC) of UNESCO to promote tsunami preparedness through active collaboration of public, community leaders, and national and local emergency management agencies.

The main objective of this programme is to improve coastal community's preparedness for tsunami emergencies, to minimize the loss of life and property and to ensure a structural and systematic approach in building community preparedness through fulfilling the best-practice indicators set by the Intergovernmental Coordination Group for the Indian Ocean Tsunami Warning and Mitigation System (ICG/IOTWMS) of UNESCO-IOC.

Abanindranath Tagore, the nephew of Rabindranath Tagore, was one of the most prominent artists of Bengal school of art in India. He was the first major supporter of swadeshi values in Indian art.

The contribution of Abanindranath Tagore towards Indian art and culture are: 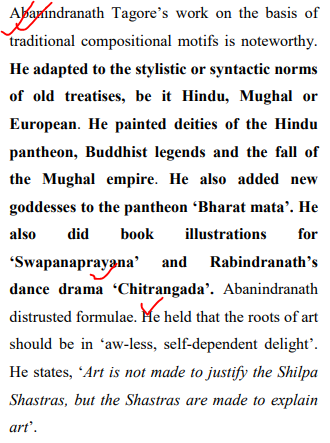 Significance of the move:

RBI opening up more funds for lending to startups is a very positive step. Startups have not had easy access to debt, stymied by traditional lender metrics of creditworthiness. This is a huge booster as sufficient funding and user adoption are two primary challenges for Indian entrepreneurs.

Besides, Startups have mostly relied on expensive venture debt. This move will help startups free up their equity and raise low cost debt.

What is Priority Sector Lending?

It means those sectors which the Government of India and Reserve Bank of India consider as important for the development of the basic needs of the country and are to be given priority over other sectors. The banks are mandated to encourage the growth of such sectors with adequate and timely credit.

Priority Sector Lending Certificates (PSLCs) are a mechanism to enable banks to achieve the priority sector lending target and sub-targets by purchase of these instruments in the event of shortfall. This also incentivizes surplus banks as it allows them to sell their excess achievement over targets thereby enhancing lending to the categories under priority sector.

Go through link of RBIwebsite to read more. Click here.