Are WhatsApp Chats Admissible in Evidence?

Important Article. We will see things relevant for Prelims.

The social media is abuzz with the details from alleged WhatsApp chats between Republic TV anchor Arnab Goswami and former BARC CEO Partho Das Gupta. The 500-page long WhatsApp conversations between Goswami and Das Gupta found their way into social media after Mumbai Police annexed it in its supplementary charge filed in the TRP rigging case.

In this backdrop, several users raised questions regarding admissibility of WhatsApp chats as evidence. Let us discuss this issue.

The first thing we have to keep in mind is that an "electronic record" is also included in the definition of "evidence" under Section 3 of the Indian of the Indian Evidence Act. It is treated as 'documentary evidence'.

The Evidence Act allows giving of evidence in respect of facts in issue and relevant facts. So, an electronic record can be an evidence in a trial if it relates to a fact in issue or a relevant fact of a case. However, there is a catch with respect to electronic records. The nature of evidence in in the case of online conversations like WhatsApp chats will mostly be secondary in nature. In other words, the evidence produced in the court with respect to online chats will be print outs of the backup documents saved in the server or of the screen-shots of the chats, unless the device itself is produced.

The normal rule of evidence is that a document must be proved by primary evidence by proving the document itself. Oral evidence about the contents of the documents is barred by the Evidence Act (Section 92).

Realizing the advent of information technology, the legislature incorporated a special provision in 2000 to admit electronic evidence in secondary form - Section 65B.

Section 65B says that any information contained in an electronic record which is:

There are certain decisions of courts which have observed that WhatsApp chats can be admitted in evidence provided they fulfill the conditions under Section 65B.

What is Vertical farming? 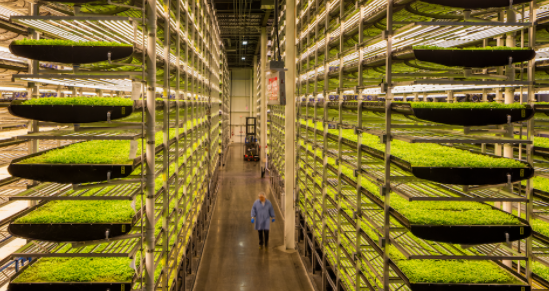 In vertical farming, crops are grown indoors, under artificial conditions of light and temperature. It aims at higher productivity in smaller spaces. It uses soil-less methods such as hydroponics, aquaponics and aeroponics.

Vertical farming uses significantly less water and pesticides than traditional agricultural methods. Being indoors, the crops aren't subject to seasons and hence give high productivity year-round. Lettuces, tomatoes and green crops can be produced through this practice.

Firstly, the primary goal of vertical farming is producing more foods per square meter. To accomplish this goal, crops are cultivated in stacked layers in a tower life structure. Secondly, a perfect combination of natural and artificial lights is used to maintain the perfect light level in the room. Technologies such as rotating beds are used to improve lighting efficiency.

With this information, you can solve any Prelims question on this topic.

This was the first report of a primary deposit of vanadium in India.

The front seat in electric mobility

Why a transition to Electric Vehicles?

It is important for India because such vehicles are sustainable and profitable in the long term. They will reduce dependence on crude oil will save the government money, reduce carbon emissions, and build domestic energy independence.

Under the ‘Faster Adoption and Manufacturing of Hybrid and Electric Vehicles’ (FAME) Scheme, the government has allocated $1.3 billion in incentives for electric buses, three-wheelers and four- wheelers to be used for commercial purposes till 2022, and earmarked another $135 million for charging stations.

A proposal for a $4.6 billion subsidy for battery makers has also been proposed by the NITI Aayog. Further India has the vision to have 30% electric vehicles plying the roads by 2030.

In order to achieve its goals of electric vehicles development of lithium - ion batteries are crucial. To boost the local manufacturing of such batteries India will have to import Lithium.

At present, India’s lithium-ion battery demand is fulfilled by imports from China, Vietnam, and Hong Kong. In the last two years, India has had a growing appetite for lithium-ion batteries, and so, lithium imports have tripled from $384 mn to $1.2 bn.

Latin America’s famous lithium triangle that encompasses lithium deposits under the salt flats of northwest Argentina, northern Chile, and southwest Bolivia holds about 80% of the explored lithium of the world. In Latin America, most of the production comes from Argentina, Chile, and Bolivia. 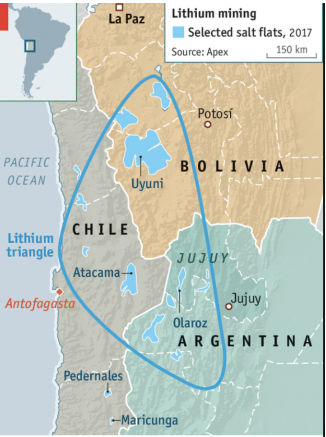