Post the imposition of lockdown due to COVID-19, there has been a fall in the digital transactions for April’2020. In this story, we take a look at the various trends and indicators relating to currency in circulation.

The Data is taken from: Weekly Statistical Supplement provided by RBI under “Reserve Money Components & Sources” 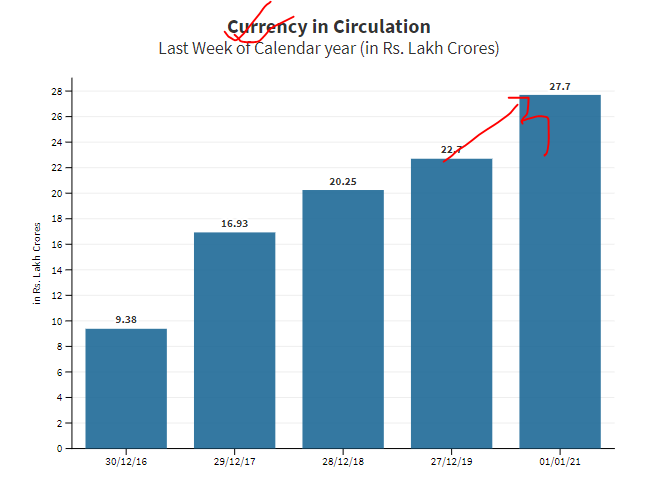 Currency with Public has increase during lock down and after

As per RBI’s definition, Currency with Public is “Currency in Circulation” minus “Cash with Banks”.

Around the time a nationwide wide lockdown was announced, the total currency in circulation was Rs. 24.39 Lakh crores (as of 27 March 2020).  Of this, 96% i.e., Rs. 23.41 lakh crores were “Currency with the Public” and the balance of Rs. 97.5 thousand crores were the Cash with the banks.  As per RBI’s definition, Currency with Public is “Currency in Circulation” minus “Cash with Banks”. 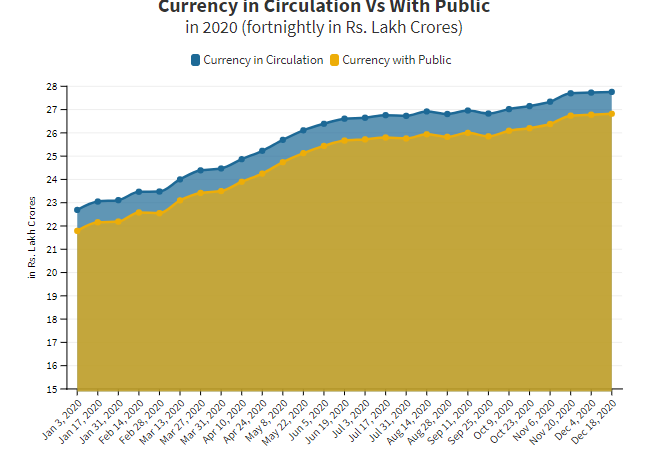 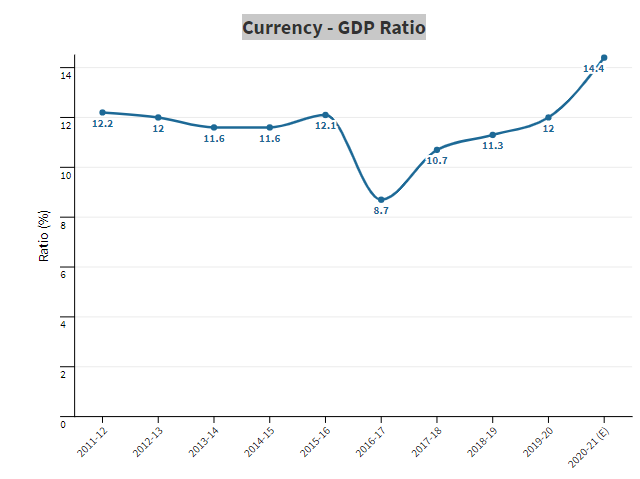 The increasing trend on Currency-GDP ratio and the potential spike this year belies the argument that the increase in currency circulation is due to the expansion of the economy.

The cash transfers as part of the government’s Atmanirbhar package could have also contributed to an increase in cash circulation.

Advisory for management of Human-Wildlife Conflict

The Standing Committee of National Board of Wildlife (SC-NBWL) in its 60th meeting held on 05th January has approved the advisory for management of Human-Wildlife Conflict (HWC) in the country. The advisory makes important prescriptions for the States/ Union Territories for dealing with Human-Wildlife conflict situations and seeks expedited inter-departmental coordinated and effective actions.

The advisory envisages empowering gram panchayats in dealing with the problematic wild animals as per the section 11 (1) (b) of Wild Life (Protection) Act, 1972.

Provide Instant Relief: Payment of a portion of ex-gratia as interim relief within 24 hours of the incident to the victim/family.

A number of countries across the world such as Austria, Brazil, the Czech Republic, the EU, France, India etc. have imposed digital tax on the Internet-based non-resident companies such as Amazon, Google, Facebook etc. In this regard, the US government believes that such taxes are basically targeted towards American Companies and hence it has recently started investigations into imposition of such digital taxes.

Apart from that, a number of concerns have also been raised against the imposition of the Digital Tax in India. In this regard, let us focus on the following dimensions:

Rationale behind introduction of Digital Taxes

The existing tax norms have been framed keeping in mind the brick-and-mortar business models. However, these norms are not suitable to regulate online services.

With rapid advancements in the field of big data and AI, the digital companies have been able to harness the user generated data enabling them to earn huge revenues through digital advertisements. In spite of the fact that these companies earn revenue by harnessing the data generated in a particular country, these companies are not obliged to pay adequate taxes in source country. Hence, Equalization Levy has been introduced in the Union Budget 2016 in order to bring such Internet based companies within the ambit of tax.

The equalization levy of 6% is applicable to the income accruing to a foreign E-commerce company which is not a resident of India. Any person or entity in India which makes a payment exceeding Rs 1 lakh in a financial year to a non-resident technology company (such as Google) for some B2B (Business to Business) transactions needs to withhold 6% of the gross amount to be paid as equalization levy.

The two conditions to be met to be liable to equalization levy:

For example: Let's say an Indian Company XYZ has availed the online advertisement services of Google for its business promotion and has made a payment of Rs. 2 lakhs to Google towards these online advertisement services. Here, the company would be required to deduct Rs 12,000 as Equalisation levy and pay the remaining amount of Rs 1.88 lakhs to Google.

The new modification introduced in the Finance Act, 2020 has been opposed by the Foreign e-commerce companies on account of following reasons:

Hence, such booking platforms are quite distinct from streaming services such as Amazon Prime, Netflix etc. Accordingly, some of the companies have pointed out that it would be unfair to tax the companies that provide Goods/services through Digital mode on par with companies that provide Digital Services. Hence, even though, the Government’s idea is to tax e-commerce transactions, but it may end up taxing even those transactions where Internet is just a medium.

Commodity Groups Covered: 5 commodity groups which include Meat, Dairy, Cereals, Vegetable oil and Sugar. These commodities represent about 40 percent of gross agricultural food commodity trade. They are chosen for their high and strategic importance in global food security and trade.

Weightage Assigned: Each of the Commodity groups is assigned a weightage in proportion to its share in the global trade in agricultural commodities.

Base Year: A three-year period is chosen to minimize the impact of variation in both internationally traded prices and quantities. Earlier, the Base year was 2002-04, but now it has been changed to 2014-16. The base period 2014–16 was chosen as the new base as it was considered the most representative period for most markets in the past ten years.

About the Food and Agriculture Organization:

Representation of Women in Panchayati Raj

Senior Congress leader from Haryana has asked the Governor of Haryana to annul the provisions in the Haryana Panchayati Raj (Second Amendment) Act, 2020 to declare as arbitrary, irrational, discriminatory and unconstitutional. The Act provides for 50% reservation for women in PRIs.