Current Status of NPA of Public and Private Sector Banks

Here is a look at the trends in NPAs and loan Write-offs over the years based on the information provided by RBI.

As per RBI’s data, the total Gross NPAs declared by the Public Sector, Private Sector, Foreign, Small Finance & Payments banks as on 31 March 2020, amounted to Rs. 8.99 lakh crores, less than the Rs. 9.36 lakh crores as of 31 March 2019. Gross NPAs have been on a declining trend over the last two financial years compared to 2017-18, the year when gross NPAs touched the highest of Rs. 10.39 lakh crores.

Over the last two years, apart from Gross NPA, there is also a fall in the Net NPA.

Apart from the fall in the total value of Net NPAs, the share of Net NPAs out of the gross NPAs has also shown a declining trend. In 2019-20, net NPAs accounted for 32% of Gross NPA, while it was 38% and 50% in the earlier years. 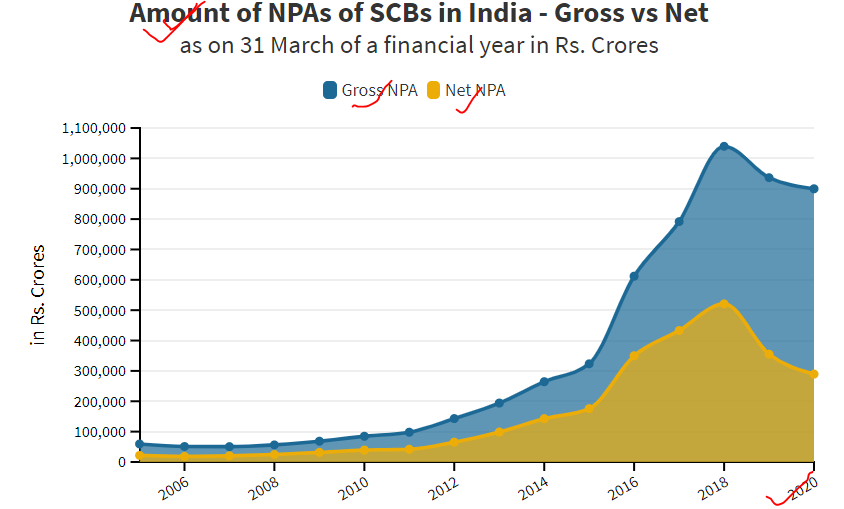 NPAs of Public Sector Banks constitute the major portion of the overall NPAs. The fall in the overall NPAs in the last two years compared to 2017-18 can be attributed to the lesser NPAs reported for Public sector banks.  By the end of 2019-20, the Gross NPAs of Public Sector Banks were Rs. 6.78 lakh crores compared to Rs. 7.39 lakh crores by the end of the previous financial year. 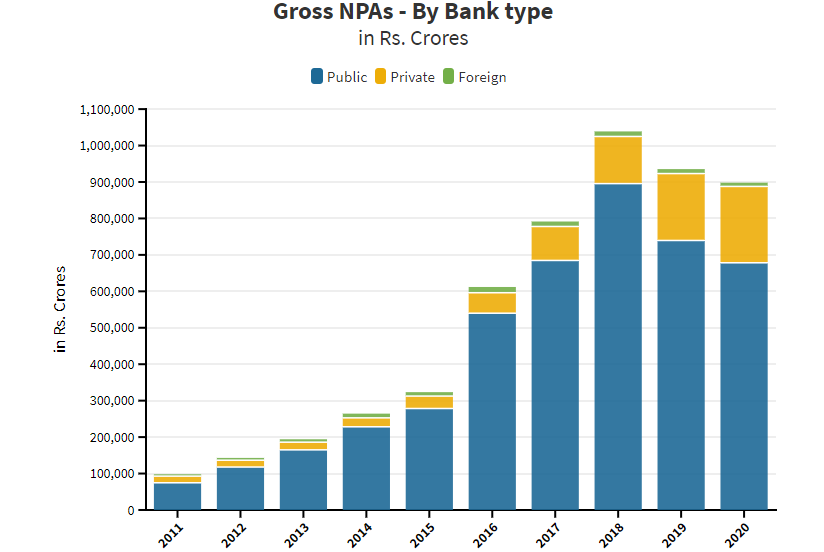 Increase in new NPAs added during the year 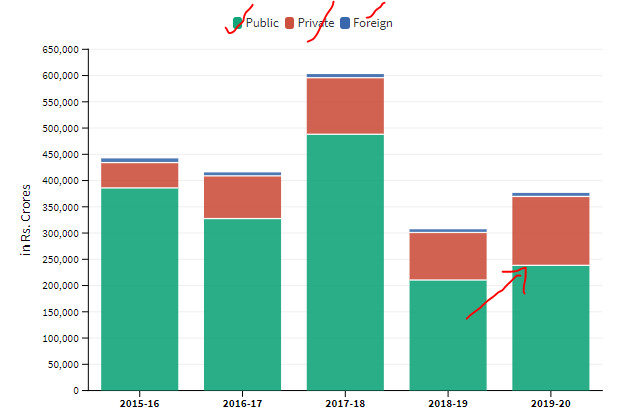 Increase in the value of NPAs being written off 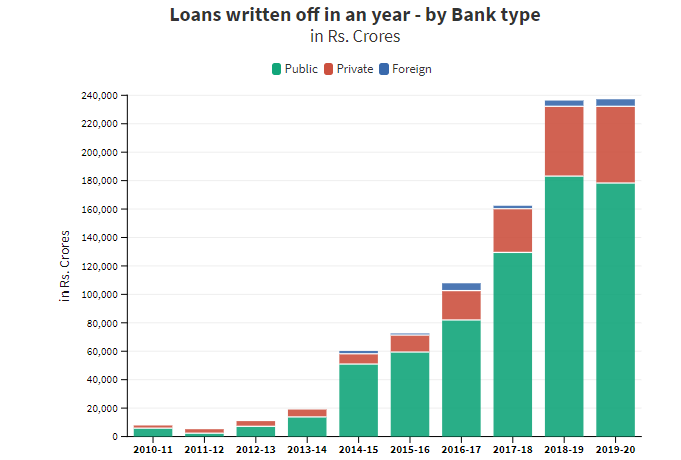 As per the information provided in the Economic Survey of India -2020, during the year 2017-18, 14.9% of the NPAs of SCBs (Scheduled Commercial Banks) were recovered through various recovery mechanisms. The Insolvency & Bankruptcy Code (IBC) has been the most successful compared to the earlier recovery regimes. For the year 2018-19, the recovery rate is provisioned at 15.5%. 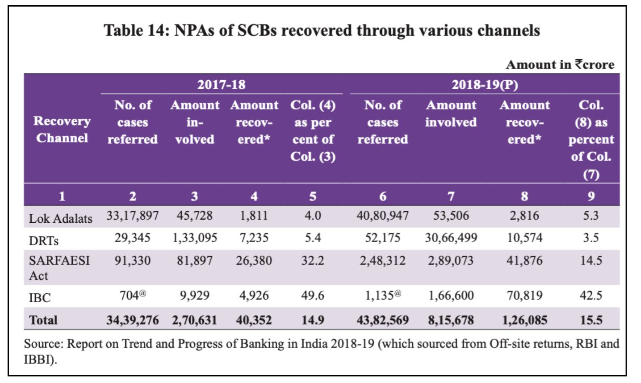 Recently, the Ministry of Health & Family Welfare has released the Longitudinal Ageing Study of India (LASI) Wave-1 Report on the virtual platform.

LASI is a full–scale national survey of scientific investigation of the health, economic, and social determinants and consequences of population ageing in India. It is India’s first and the world’s largest ever survey that provides a longitudinal database for designing policies and programmes for the older population in the broad domains of social, health, and economic well-being.

The evidence from LASI will be used to further strengthen and broaden the scope of National Programme for Health Care of the Elderly and also help in establishing a range of preventive and health care programmes for older population and most vulnerable among them.

The LASI has embraced state-of-the-art large-scale survey protocols and field implementation strategies including representative sample of India and its States, socioeconomic spectrum, an expansive topical focus, a longitudinal design, and the use of Computer Assisted Personal Interviewing (CAPI) technology for data collection, quality control, and Geographic Information System (GIS).

A unique feature of LASI is the coverage of comprehensive biomarkers. No other survey in India collects detailed data on health and biomarkers together with information on family and social network, income, assets, and consumption.

UNFPA is the United Nations sexual and reproductive health agency. Our mission is to deliver a world where every pregnancy is wanted, every childbirth is safe and every young person's potential is fulfilled.

Recently, the Reserve Bank of India (RBI) has announced the operationalization of the Payment Infrastructure Development Fund (PIDF) scheme.

PIDF is intended to subsidize deployment of payment acceptance infrastructure in Tier-3 to Tier-6 centres with special focus on North-Eastern States of the country. It envisages creating 30 lakh new touch points every year for digital payments.

An Advisory Council (AC), under the Chairmanship of the Deputy Governor, RBI, has been constituted for managing the PIDF.

Implementation of targets under PIDF shall be monitored by RBI, MRO with assistance from Card networks, Indian Banks’ Association (IBA) and Payments Council of India (PCI).

The PIDF will be operational for three years from 1 January 2021, and may be extended for two more years based on progress. The fund has a corpus of ?345 crore, of which ?250 crore was contributed by RBI and ?95 crore by authorized card networks operating in India.

Karnataka Chief Minister B.S. Yediyurappa laid the foundation stone for the ‘New Anubhava Mantapa’ in Basavakalyan, the place where 12th century poet-philosopher Basavanna lived for most of his life.

The project will showcase the 12th Century Anubhava Mantapa (often referred to as the “first Parliament of the world”) established by him in Basavakalyan, where philosophers and social reformers held debates.

The building will adopt the Kalyana Chalukya style of architecture.

About Basavanna, his thoughts and contributions:

In November 2015, the Prime Minister of India Narendra Modi inaugurated the statue of Basaveshwara along the bank of the river Thames at Lambeth in London.