Is It Constitutional to Declare Wild Animals to Be ‘Vermin’?

Farmers in particular lose their livelihoods, standing crops – when stray animals trample them. So, state governments have sent several requests over the years to the Centre to declare certain species as ‘vermin’, so that they may be hunted and killed without consequence.

We will see here certain legal and constitutional provisions regarding protection of wildlife. So many Prelims based question you can get from this Article. So, read carefully.

The Wildlife (Protection) Act 1972 does not define the term ‘vermin’. However, its Schedule V contains a list of animals designated ‘vermin’, including rats, crows and foxes.

Section 62 of the Act empowers the Centre to declare wild animals of any species as ‘vermin’ in any area and for a specified period of time. These animals are deemed to be included in Schedule V, opening them up to be hunted.

However, many experts have argued against such mass-culling because it is ineffective and does not resolve the human-animal conflicts. Against this background, it’s worth noting that the constitutionality of Section 62 of the Act is also suspect for three reasons:

Article 14 of the Indian Constitution secures equality and equal protection before the law. One of the tests to determine compliance with Article 14 is called manifest arbitrariness. A law suffers from arbitrariness when it is ‘excessive’ and ‘capricious’ or suffers from the lack of an ‘adequate determining principle’. The wording of Section 62, which allows the Centre to declare any wild animal to be ‘vermin’, apart from those listed in the Act’s Schedule I and part II of Schedule II, itself doesn’t disclose a determining principle, leave alone an adequate one.

In its controversial decision in Animal Welfare Board of India v. A. Nagaraja (2014), the Supreme Court extended the right to life under Article 21 of the Constitution to animals. This opinion understandably drew flak from lawyers and constitutional experts, but high courts around the country have cited it and expanded on it. For example, the Uttarakhand high court in 2018 and the Punjab and Haryana high court in 2019 declared all the members of the animal kingdom to be legal entities, with distinct legal personalities and with rights akin to those of a living person.

What the DPSPs and fundamental duties say:

The first mention of wildlife in the Indian Constitution is in Article 48A, a part of the DPSPs. It states that the state shall endeavour to protect and improve the environment and to safeguard forests and wildlife.

Article 51A(g) under the fundamental duties also makes it the duty of every citizen “to protect and improve the natural environment including forests, lakes, rivers and wildlife, and to have compassion for living creatures.”

Where do we go from here?

We can conclude that in its current form, Section 62 fails to distinguish between individuals that are directly responsible for the destruction of crops and others of the same species. It also suffers from several legal infirmities, primarily vis-à-vis Articles 14 and 21. Our constitutional framework envisions a harmonious relationship between humans and the rest of the ecosystem. The section threatens this fragile relationship and challenges our fundamental human values of compassion, empathy and respect for other life forms.

International E-Waste Day has been observed on October 14 every year since 2018. Important for us is E-waste Management Rules.

The Ministry of Environment, Forest and Climate Change notified the E-Waste Management Rules, 2016 on 23 March 2016 in supersession of the e-waste (Management & Handling) Rules, 2011.

Now we will see the salient features of this Bill:

2. It mandated extended producer responsibility (EPR) for all plastic producers, importers and brand owners (PIBOs). ERP is a mechanism through which producers are made responsible for handling and recycling end-of-life products.

3. Compact Fluorescent Lamp (CFL) and other mercury containing lamp brought under the purview of rules.

5. Deposit Refund Scheme has been introduced as an additional economic instrument wherein the producer charges an additional amount as a deposit at the time of sale of the electrical and electronic equipment and returns it to the consumer along with interest when the end - of - life electrical and electronic equipment is returned.

6. The manufacturer is also now responsible to collect e - waste generated during the manufacture of any electrical and electronic equipment and channelize it for recycling or disposal and seek authorization from State Pollution Control Board (SPCB)

7. The roles of the State Government have been also introduced in the Rules in order to ensure safety, health and skill development of the workers involved in the dismantling and recycling operations.

8. Department of Industry in State or any other government agency authorized in this regard by the State Government is to ensure earmarking or allocation of industrial space or shed for e - waste dismantling and recycling in the existing and upcoming industrial park, estate and industrial clusters.

9. Department of Labour in the State or any other government agency authorized in this regard by the State Government need to ensure recognition and registration of workers involved in dismantling and recycling.

10. State Government to prepare integrated plan for effective implementation of these provisions, and to submit annual report to Ministry of Environment, Forest and Climate Change.

11. Liability for damages caused to the environment or third party due to improper management of e - waste including provision for levying financial penalty for violation of provisions of the Rules has also been introduced.

12. Urban Local Bodies (Municipal Committee/Council/Corporation) has been assign the duty to collect and channelized the orphan products to authorized dismantler or recycler.

13. The import of electrical and electronic equipment shall be allowed only to producers having Extended Producer Responsibility authorisation.

The Global Hunger Index (GHI) is a tool for comprehensively measuring and tracking hunger at global, regional, and national levels. GHI scores are based on the values of four component indicators.

child wasting—the share of children under age five who have low weight for their height, reflecting acute undernutrition

child stunting—the share of children under age five who have low height for their age, reflecting chronic undernutrition (child wasting and child stunting data are from UNICEF, the World Health Organization, the World Bank, and the Demographic and Health Surveys Program)

Based on the values of the four indicators, the GHI determines hunger on a 100-point scale, where 0 is the best possible score (no hunger) and 100 is the worst. Each country’s GHI score is classified by severity, from low to extremely alarming. The 2021 GHI scores include data from 2016–2020. 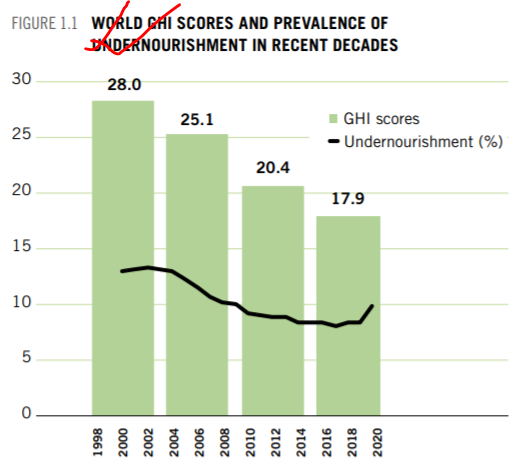 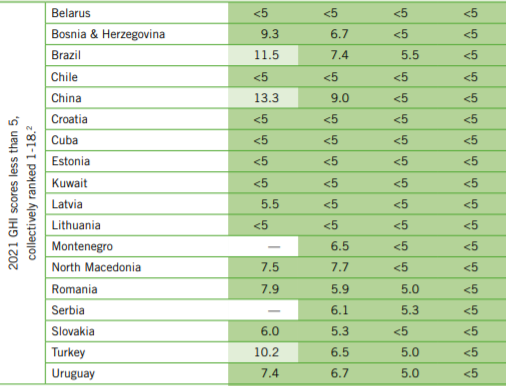 India worst in 'weight for height' among children 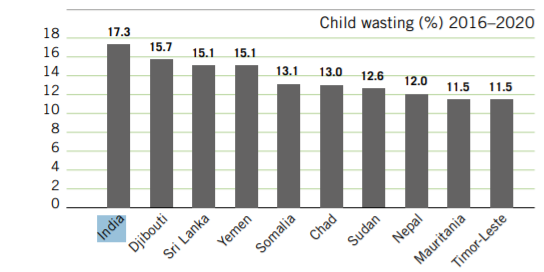 India had progressed on other indicators including undernutrition, child stunting and child mortality, according to data in the report.

About the Principles for Responsible Banking

The Principles for Responsible Banking are a unique framework for ensuring that signatory banks’ strategy and practice align with the vision society has set out for its future in the Sustainable Development Goals and the Paris Climate Agreement.

The principles were created in 2019 through a partnership between founding banks and the United Nations, and are designed to bring purpose, vision and ambition to sustainable finance.

Signatory banks commit to embedding these Principles across all business areas, at the strategic, portfolio and transactional levels. Over 250 banks representing over 40% of banking assets worldwide have now joined this movement for change and embarked on their 4-year journeys of impact analysis, target setting and reporting.