LED lights use about 50 percent less electricity than traditional incandescent, fluorescent and halogen options, resulting in substantial energy cost savings, especially for spaces with lights that are on for extended periods.

LEDs also aim light in a specific direction unlike conventional bulbs, which emit light—and heat—in all directions (because LEDs are mounted on a flat surface, they emit light hemispherically rather than spherically). This directional lighting capability reduces wasted light and energy.

Unlike incandescent lighting, LEDs don’t “burn out” or fail, they merely dim over time. Quality LEDs have an expected lifespan of 30,000–50,000 hours or even longer, depending on the quality of the lamp or fixture. A typical incandescent bulb lasts only about 1,000 hours; a comparable compact fluorescent lasts 8,000 to 10,000 hours. With a longer operational life, LEDs can reduce labor costs of replacing bulbs in commercial situations, achieving a lower maintenance lighting system.

This makes LEDs a natural fit for refrigerated display cases, freezers and cold storage spaces in addition to outdoor applications such as the parking lot, building perimeter and signage. DOE testing of an LED refrigerated case light measured 5 percent higher efficacy (the efficiency of a light source in lumens per-watt, like miles-per-gallon) at -5°C, compared to operation at 25°C.

Without filaments or glass enclosures, LEDs are breakage resistant and largely immune to vibrations and other impacts. Traditional lighting is usually contained in a glass or quartz exterior, which can be susceptible to damage. LEDs, on the other hand, tend not to use any glass, instead they are mounted on a circuit board and connected with soldered leads that can be vulnerable to direct impact, but no more so than mobile phones and similar small electronic devices.

Most fluorescent and HID lamps do not provide full brightness the moment they’re switched on, with many requiring three minutes or more to reach maximum light output. LEDs come on at 100-percent brightness almost instantly however, and with no re-strike delay. This can be advantageous following a power outage or anytime employees open a building during early morning hours when it is still dark outside.

Traditional light sources tend to have a shorter lifespan the more they’re switched on and off, whereas LEDs are unaffected by rapid cycling. In addition to flashing light displays, this capability makes LEDs well suited for use with occupancy or daylight sensors.

It can take more than a few dollars to make commercial fluorescent lighting systems dimmable, but LEDs, as semiconductor devices, are inherently compatible with controls. Some LEDs can even be dimmed to 10 percent of light output while most fluorescent lights only reach about 30 percent of full brightness. LEDs also offer continuous, opposed to step-level, dimming (where the shift from 100-to-10-percent light output is smooth and seamless, not tiered).

No IR or UV Emissions

Less than 10 percent of the power used by incandescent lamps is actually converted to visible light; the majority of the power is converted into infrared (IR) or radiated heat. Excessive heat and ultraviolet radiation (UV) present a burn hazard to people and materials. LEDs emit virtually no IR or UV. Rapid advancements in LED lighting technologies, with more improvements on the horizon, have resulted in lowered costs and increased reliability of LEDs. And while it may be tempting to assume LEDs are the right choice for all applications because of their energy efficiency, selection should be based on a combination of factors, including light quality and distribution, dimmability, and expected lifetime.

For the fourth year in a row, Kerala has topped. 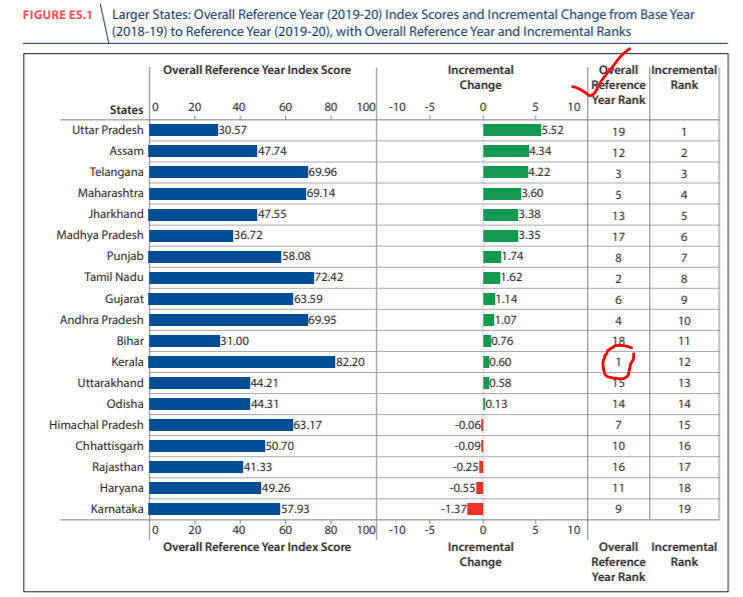 How are the states ranked?

The Health Index score is prepared based on the States’ performance across a large set of indicators that are divided into three broad domains — health outcomes, governance and information, and key inputs and processes.

Health outcomes, for instance, include parameters such as neonatal mortality rate, under-5 mortality rate and sex ratio at birth.

Insurance penetration is measured as the percentage of insurance premium to GDP.

(Insurance premium and GDP figures should be in same currency, it can be Rs., $ .... will not make any difference)