Law regarding Strikes and Lockouts

First and foremost, it has to be stated that the right to strike is not a fundamental right under the Constitution of India, the right to form an association/union is. This statement has also been iterated in the Supreme Court judgment of All India Bank Employees Association v. National Industrial Tribunal.

Even Article 43A of the Constitution under Directive Principles of State Policy mentions that the state shall take steps to secure the participation of workers in the management of undertakings, establishments or other organizations engaged in any industry.

In B.R. Singh v. Union of India, Justice Ahmadi had recorded that, "Strike in a given situation is only a form of demonstration. There are different modes of demonstrations, e.g., go-slow, sit-in, work-to-rule, absenteeism, etc. and strike is one such mode of demonstration by workers for their rights. The right to demonstrate and therefore, the right to strike is an important weapon in the armory of the workers. This right has been recognized by almost all democratic countries. Though not raised to the high pedestal of a fundamental right, it is recognized as a mode of redress for resolving the grievance of workers."

It is also important to note at this point that this statutory right to strike is not available to government employees as has been stated by Justice M.B. Shah in T.K. Rangarajan v. Government of Tamil Nadu & Others.

S.2(q) of Industrial Disputes Act, 1947 and S.2(zk) of Industrial Relations code, 2020 define a strike as cessation of work by a group of persons employed in any under industry through a concerted effort or refusal or common understanding.

S.2(zk) of Industrial Relations Code, 2020 also includes in the definition of strike, a concerted (joint) casual leave on a given day by 50% or more workers employed in any industry.

This might sound surprising but the history of lockouts is older than the history of strikes. In India, the first lockout was more than twenty-five years later than it was seen on the world stage and was declared in Budge Jute Mills in Bengal.

Lockout is the employer's way of forcing certain terms and conditions on workers and the employer locks the workers out of the workplace till the time they accept these terms and conditions. Lockout is essentially work stoppage being used as a weapon by an employer to force his workers to come to a consensus and the reasons generally have to do with attaining a forceful consensus or expressing his grievance with the workers or as a show of support for one set of workers.

In Shri Ramchandra Spinning Mills v. the State of Madras, the Madras High Court has tried to define a lockout and recorded that, "a flood may have swept away the factory, a fire may have gutted the premises, a convulsion of nature may have sucked the whole place underground; still if the place of employment is closed or the work is suspended or the employer refuses to continue to employ his previous workers, there would be a lockout and the employer would find himself exposed to the penalties laid down in the Act."

The Court further noted that if an employer has closed the business temporarily due to many reasons including but not limited to using temporary closure as a means of coercion or a mode of exerting pressure, then it will be considered a lockdown.

India produces 95 minerals, including 4 fuel-related minerals, 10 metallic minerals, 23 non-metallic minerals, 3 atomic minerals and 55 minor minerals. India is one of the world's top producers of valuable minerals like chromite, iron ore, coal, and bauxite. Rajasthan is the highest contributor to minerals production in India, followed by Odisha. 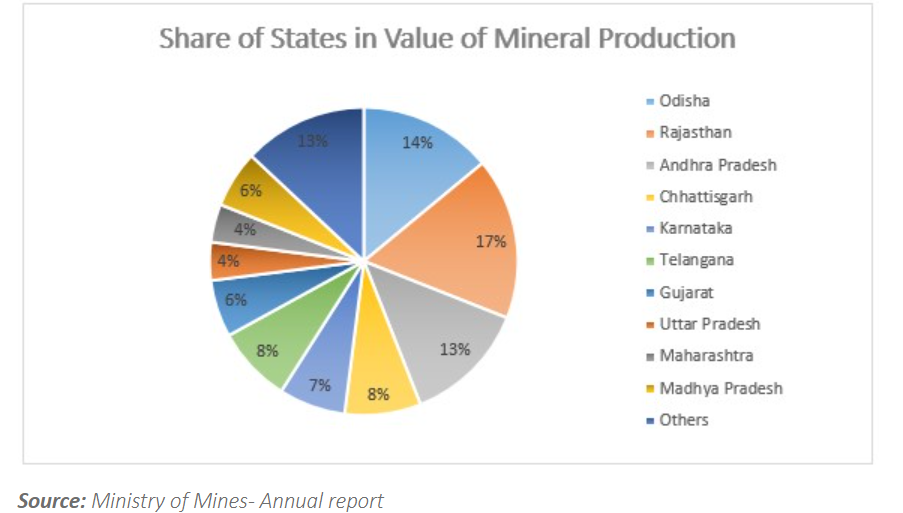 India's mining sector is one of the country's most important industries, and many industries rely on it for essential raw resources.

India relies on imports more than it exports for the mining industry; however, exports have remained stable over the years. Exports in the mining sector stood at US$ 24.66 billion for FY 20. 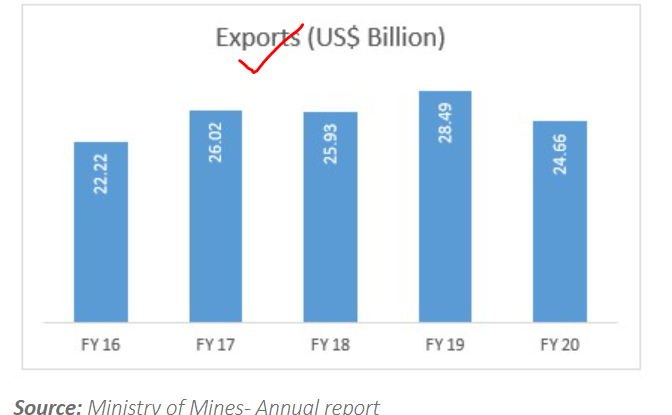 Factors that led to the growth of the mining sector in India are as follow:

The Mines and Minerals (Development and Regulation) Act 1957 (MMDR Act) was enacted by the Indian government as the primary legislation governing the mineral sector (other than petroleum and natural gas). Besides MMDR Act, the following rules and regulations establish the legal foundation for the mining industry:

The MMDR Act gives the central Government the authority to issue directives to state governments to ensure sustainable mineral development and reduction in the exploitation of air, ground, water, and noise.

The following are some of the most important steps taken by the Government to protect environmental impacts of mining:

Arctic lightning strikes up drastically in 2021

Lightning strikes have started occurring much more frequently in the Arctic as the region experiences unprecedented warming temperatures. In 2021, 91 per cent more lightning was detected at the highest latitudes of the planet, where the North Pole sits, than the previous year.

Lightning in the Arctic has historically been a rare event, as they require a mixture of cold air, warm air and convective instability.

The Arctic continues to warm more than twice as fast as the rest of the globe. The time between October 2020 and September 2021 was the seventh-warmest since the beginning of records. It was the eighth consecutive year since 2014 when the average temperature of the region was at least 1 degree Celsius above the pre-industrial average. 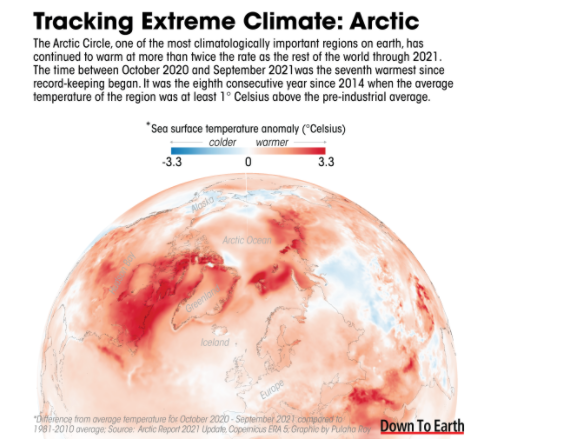 Supreme Court Issues Comprehensive Guidelines on Who Are 'Vulnerable Witnesses'

Noting that "the need for and importance for setting up special facilities which cater to the creation of a safe and barrier-free environment for recording the evidence of vulnerable witnesses has been engaging the attention of this court over the last two decades", the Supreme Court on Tuesday issued comprehensive directions in this regard. 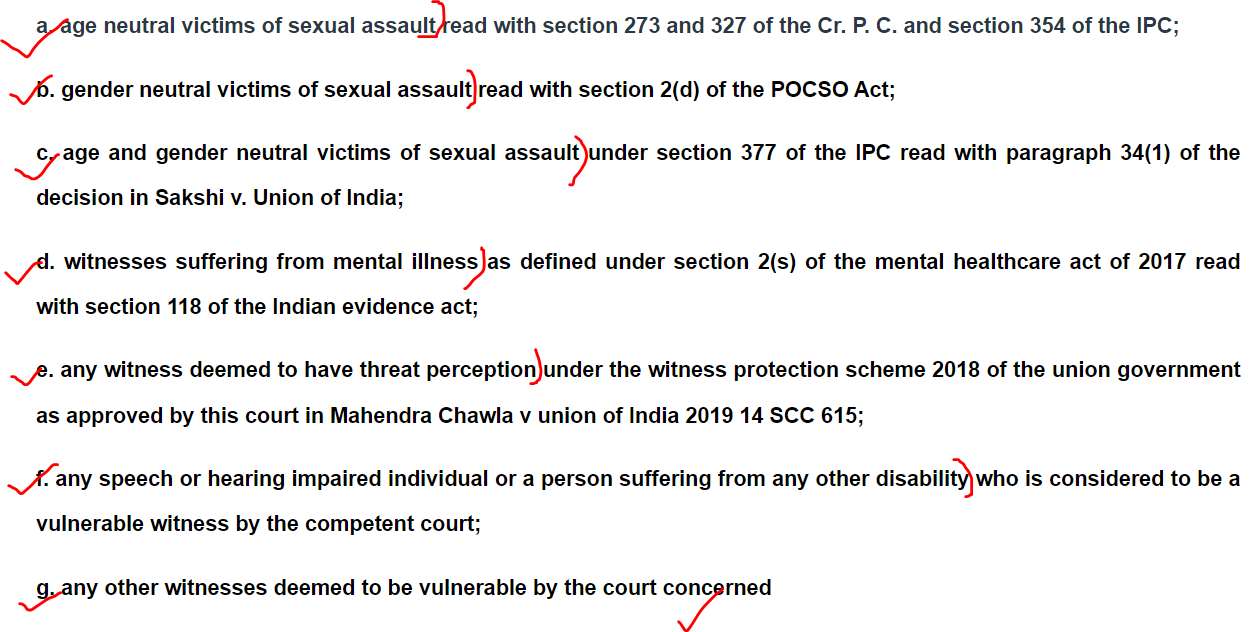 The other directions issued by the bench are enumerated below-

Above is an article from Hindu. It explains what India needs to do to exploit its demographic dividend. Most of the article is self-explanatory, but I would like to tell you that there are some characteristic features of our demographic dividend as compared to other Asian economies like China, Singapore, South Korea, Taiwan or (Brazil).

It’s not bad for India, actually its good because when the Southern States working age population will decline then the labour force can be provided by the Northern States, So overall our demographic dividend will be for long period.

Our demographic dividend (extra economic growth because of higher ratio of working age/non-working age population) is somewhat lower than the other Asian economies. This is because out previous Governments (Central/State both) have not been able to frame proper forward looking polices on health/education/nutrition/infrastructure etc. to exploit the demographic dividend.

Keep in mind that we will be able to achieve 'DIVIDEND' (i.e., benefit in terms of higher growth) from our 'DEMOGRAPHY' only if we are able to use this demography productively combined with suitable economic environment otherwise this 'DEMOGRAPHY' will give us nightmares.