This news article is based on the recent interview of Meg Seki, Executive Secretary of the Ozone Secretariat under the United Nations Environment Programme.

In 1987, the world came together to sign the Montreal Protocol, a global agreement to protect the Earth’s ozone layer. The accord was designed to phase out a host of chemicals, such as chlorofluorocarbons (CFCs) and hydrochlorofluorocarbons (HCFCs), that were creating a continent-sized hole in the ozone layer above Antarctica.

1. The Montreal Protocol has been called one of the most successful global environmental agreements in history. Why?

Meg Seki (MS): The Montreal Protocol is so significant because it successfully tackled an emerging environmental catastrophe. When scientists alerted the world that there was a gaping hole in the ozone layer due to man-made chemicals emitted into the atmosphere, political and environmental leaders came together to address the problem. Today, more than 99 per cent of ozone-depleting substances have been phased out and the ozone layer is on a path to recovery.

MS: Because of the annual variability, the size of the hole goes up and down depending on the temperature in the stratosphere.  So, we cannot predict this in advance but there’s a gradual but definite trend towards recovery.

3. How long until the hole is no more?

MS: Scientists estimate that the hole in the ozone layer will be no more by the 2060s. However, it’s very difficult to talk about complete recovery because the atmosphere itself is very different to what it was when there was no ozone depletion. Greenhouse gases, temperature changes and global warming all affect the dynamics and chemical processes in the atmosphere, impacting the recovery process. In other parts of the stratosphere, the ozone layer recovery is expected to be earlier.

4. Does climate change threaten to undo some of the progress we’ve made in repairing the ozone layer?

MS: This is a very complex issue. Ozone-depleting substances controlled by the Montreal Protocol are potent greenhouse gases that cause climate change, but we have managed to control and phase out their emissions. Climate change itself is causing changes in atmospheric circulation and temperature, which affect the depletion and recovery of the ozone layer.

The presence of greenhouse gases, such as nitrous oxide, and other pollutants in the stratosphere are also impacting ozone layer depletion. The Scientific Assessment Panel, one of three assessment panels under the Montreal Protocol, is constantly reviewing the state of the ozone layer and monitors the trends of ozone depleting substances and other gases in the atmosphere. The panel also looks into the linkages between stratospheric ozone changes and climate.

5. There are other challenges, too. The Montreal Protocol includes exemptions for some chemicals that may deplete the ozone layer. Other known ozone-depleting substances, like nitrous oxide, aren’t covered at all. Is it fair to say that the ozone layer isn’t out of the woods yet?

MS: Yes. Because of the Montreal Protocol’s success there’s been a lot of news about the ozone layer healing itself, which is great. But people now assume that the ozone hole is history, that we’ve done our job. Actually, we have a lot of challenges still ahead of us.

First and foremost, we have the Kigali Amendment implementation to phase down HFCs and address energy efficiency improvements, especially in the cooling sector. Parties are also phasing out the remaining HCFCs and reducing the exempted uses where they can. Parties have also been looking into the sound destruction of banks of ozone-depleting substances that remain in end-of-life cooling equipment and buildings.

Furthermore, although, nitrous oxide is not controlled by the Montreal Protocol parties are interested in understanding the magnitude of its impact on the ozone layer to see if any action needs to be taken.

6. How has the Montreal Protocol contributed to biodiversity?

MS: It’s clear that protecting the ozone layer meant protecting all life on Earth: ecosystems, human health, agriculture, wildlife – you name it we protect it. Without the ozone layer, too much harmful UVB radiation would have reached the Earth’s surface. This would have been bad news. Increased exposure to ultraviolet radiation can cause skin cancer and eye cataracts, and damage crops, plants and micro-organisms, affecting ecosystems and food chains.

7. What lessons from the Montreal Protocol can be applied to tackling climate change?

MS: Ozone depleting substances were widely used in many sectors of our economy – cooling, electronics, firefighting, aerosols, medicine… and as fumigants in agriculture. Innovative measures and mechanisms were needed to ensure that the ozone-depleting substances that had become so essential to human life could be eliminated without disrupting the functioning of society.

To make this happen, all countries, developed and developing, collaborated in a global partnership, also with the full cooperation of industries and other stakeholders, to meet their respective responsibilities. The success of the Montreal Protocol should give us hope and some good lessons learned for tackling other global environmental issues, including climate change and the sustainable development agenda.

Parts of Europe have reported a ‘wind drought’, as wind speed in many places slowed about 15 per cent below the annual average or even more.

Annual wind speeds dropped by 5-15 per cent in large parts of Europe, central Asia, eastern Asia and North America, a 2010 study published in Nature journal found. The most pronounced effect was seen across Eurasia.

As carbon dioxide levels rise and the Earth’s poles warm, researchers are predicting a decline in the planet’s wind speeds. This ‘stilling’ could impact wind energy production and plant growth and might even affect the Gulf Stream, which drives much of the world’s climate. 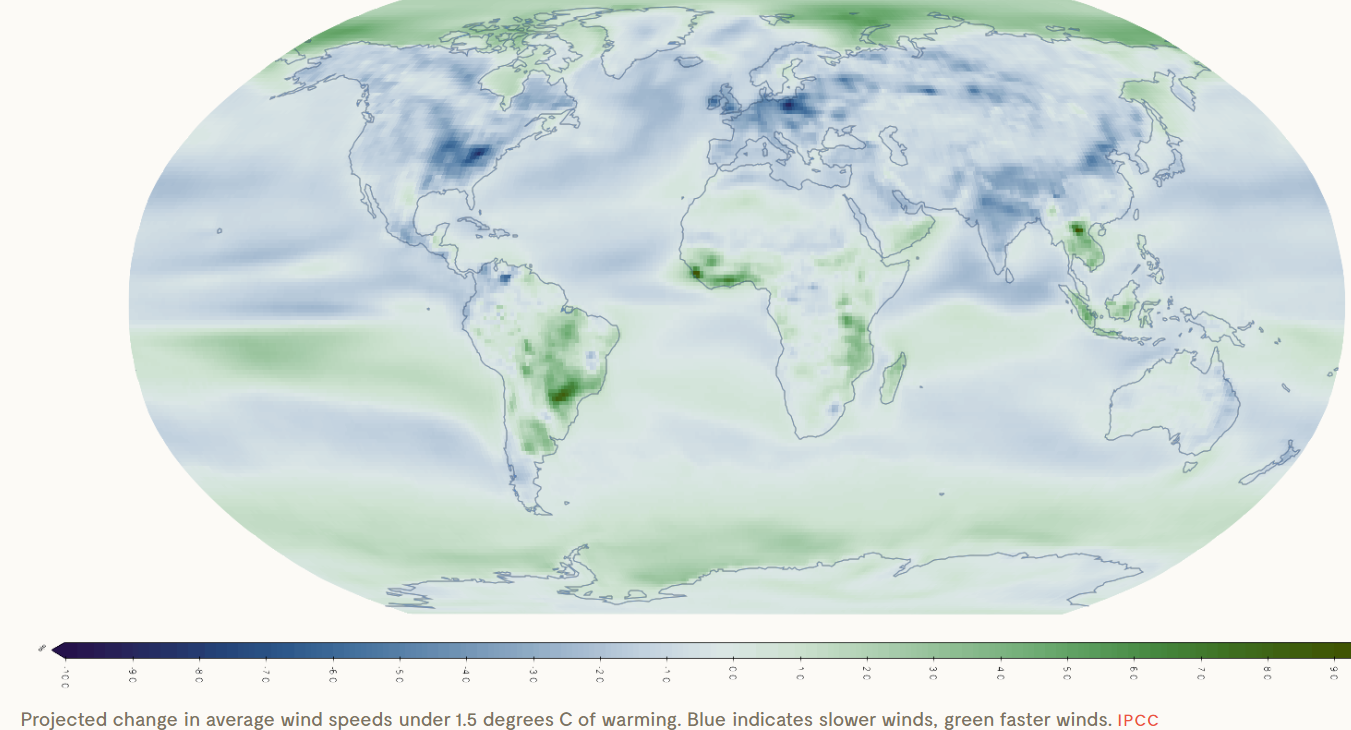 Global stilling, if it happens, will have a massive impact on alternative energy production. “A 10 percent drop in winds would actually result in a 30 percent drop, and that would be catastrophic.

Along with global warming, another factor behind stilling may be ‘surface roughness’ — caused by urbanization and vegetation changes, which acts almost like a filter and slows wind speeds down.

Deadly summer heatwaves in north-central India can be linked to a climate pattern in the Pacific called the Pacific Meridional Mode (PMM), according to a new study.

What is Pacific Meridional Mode (PMM)?

Pacific Meridional Mode (PMM) is a climate mode in the North Pacific. In its positive state, it is characterized by the coupling of weaker trade winds in the northeast Pacific Ocean with decreased evaporation over the ocean, thus increasing sea surface temperatures (SST); and the reverse during its negative state.

This coupling develops during the winter months and spreads south-westward towards the equator and the central and western Pacific during spring, until it reaches the Intertropical Convergence Zone (ITCZ), which tends to shift north in response to a positive PMM.

There are actually two meridional modes, one in the Atlantic and one in the Pacific.