APCAM (Asia Pacific Centre for Arbitration & Mediation) is an international ADR (Alternative Dispute Resolution) centre formed jointly by about ten arbitration and mediation centres from the Asia-Pacific countries, which host APCAM centres in their respective countries.

India is a member of it or not?

We will also see Arbitration and Conciliation (Amendment) Act 2019

It seeks to amend the Arbitration and Conciliation Act, 1996.  The Act contains provisions to deal with domestic and international arbitration and defines the law for conducting conciliation proceedings.  Key features of the Bill are:

This is just one topic we took from report. It is just to give you fair idea what terms and parameters are used to determine the stability of Banks. No need to learn anything. Just see terminologies. I have not explained each terminology. Any term you don’t know, search it and find.

The Financial Stability Report (FSR) is a biannual report published by the Reserve Bank of India (RBI). The objective of the report is to review the nature and magnitude of risks, and their implications which can affect the macroeconomic environment, financial institutions, markets, and infrastructure.

This story focusses on the performance of Scheduled Commercial Banks (SCBs) as presented in FSR.

COVID-19 halted the improvement in credit demand of banks

Hope you are familiar with all the above terms. If not search in google or any source. 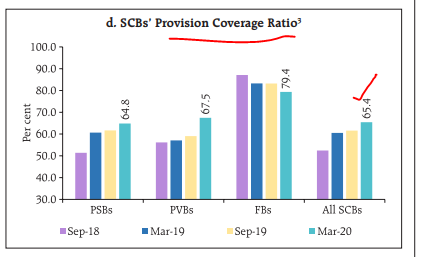 Five indices based on the five dimensions of Soundness, Asset Quality, Profitability, Liquidity, and Efficiency, are analyzed to assess the impact of underlying conditions and risk factors on the stability of banking sector.

SCBs had recorded a decline in the dimensions of soundness, liquidity, and efficiency in March 2020 compared to September 2019, contributing to a decline in stability of the sector, while a marginal improvement in asset quality, and profitability was recorded. 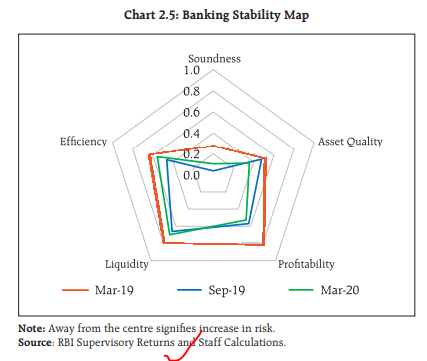 RBI takes into consideration four different scenarios and evaluates a bank’s financial position at these hypothetical conditions which help in decision making within the bank. One is the baseline scenario which is derived from the projected values of macroeconomic variables. The other three adverse scenarios- medium, severe, and very severe, are calculated for worsening macroeconomic indicators as indicated in the chart below. 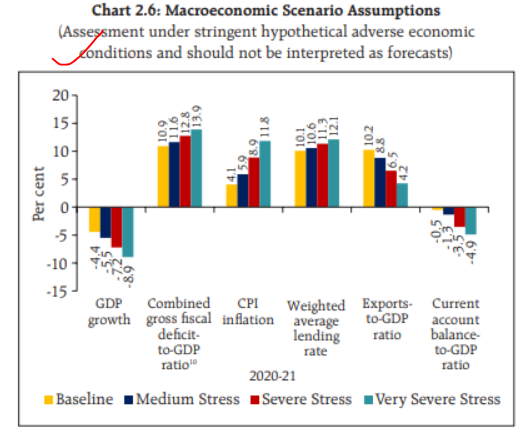 GNPA ratio is expected to increase to up to 14.7% in the worst-case scenario

Governor of RBI stated that India’s financial system is sound

It remains to be seen if the predictions made in the report come true.

The Union Housing and Urban Affairs Ministry recently said over 5 lakh applications had been received under the PM Street Vendor’s AtmaNirbhar Nidhi (PM SVANidhi) scheme for street vendors since it started on July 2 and 1 lakh loans had been sanctioned already.

What is the Scheme?

This is a Central Sector Scheme to facilitate street vendors to access affordable working capital loan for resuming their livelihoods activities, after easing of lockdown.

What are the objectives of the Scheme?

What are the salient features of the Scheme?

Who is the target beneficiary for the Scheme?

Street vendors/ hawkers vending in urban areas, as on or before March 24, 2020, including the vendors of surrounding peri-urban and rural areas.

Recently, the Ministry of Housing and Urban Affairs signed MoU with Small Industries Development Bank of India (SIDBI) in order to engage SIDBI as the Implementation Agency for the scheme.

Which lending institutions will provide credit?

What is the tenure of the Scheme?

The Scheme shall be implemented up to March 2022.

The Union Territories of Jammu and Kashmir (J&K) and Ladakh in North India, with their wide variety of landscape, are a congruence of several languages and cultural practices. The region is believed to have served as a corridor for ancient human migrations between the Indian subcontinent and North-East Asia, Eurasia and Africa.

The populations in the region offer a unique opportunity to investigate the past anthropological and demographic events which might have shaped the extant human population diversity. In a new study, scientists at the Department of Biotechnology’s Centre for DNA Fingerprinting and Diagnostics (DBT-CDFD) have sought to decipher the genetic diversity encompassed by Gujjars from the Jammu region of J&K and the Ladakhi populations.

A previous study had found that the two communities — Gujjars and Ladakhis — exhibited lower genetic affinity towards other populations in their geographical proximity. To better understand the genetic diversity in these populations, a battery of DNA markers located on autosomes, Y-chromosome and the mitochondrial genome were employed.

The principal coordinate and cluster analysis based on autosomal DNA markers indicated Gujjars and Ladakhis were genetically distant to each other as well as to other reference populations of India, which was in concordance with Y-chromosomal analysis.

The present study is the first comprehensive attempt to determine the genetic relatedness of the Gujjars and Ladakhis to populations within India and elsewhere in the world and would help in gaining deeper insights into genetic diversity and demographic settlement in this part of the world.

A study based on satellite data has indicated a high rate of deforestation in major hornbill habitats in Arunachal Pradesh and a part of Assam.

Learn about Hornbill with respect to India: