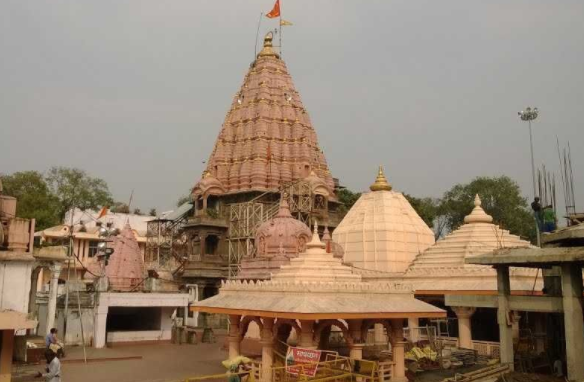 This is an example of Judicial Activism.

The Supreme Court on Tuesday issued directions to the Temple Management Committee for the preservation of Shivling in the Mahakaleshwar Temple at Ujjain.

It is pertinent to note that even though the top court had refused to interfere with the rituals being observed at the historic Mahakaleshwar Temple in Ujjain while dealing with the issue of protecting the 'Jyotirlingam' at the ancient temple, the apex court had constituted an expert committee to survey and analyze the Jyotirlingam and prepare a report stating the rate at which the deterioration in its size was taking place and measures to prevent it. This Expert Team visited Ujjain on January 19, 2019, after which its report indicated that there was erosion of Shivalinga after which the aforementioned directions were given by SC.

A bench issued the following directions for the preservation of the Lingam after taking into account the circumstances of the Report elaborated by Expert Committee:

Astronomers have primarily observed two flavours of black holes. The stellar-mass black holes are up to a few tens of times the mass of our Sun. And the supermassive black holes present at the centres of galaxies like our own are between hundreds of thousands and a billion times as massive as the Sun. Between them lies a barren region where black holes are conspicuous by their absence.

That is, we haven’t observed any black holes whose mass is more than that comparable to hundreds of stars but less than that of billions of stars. 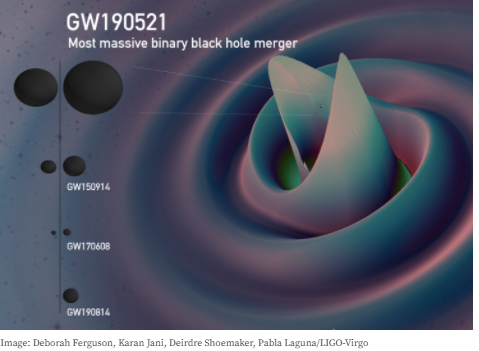 “Ringdown” method has helped to detect 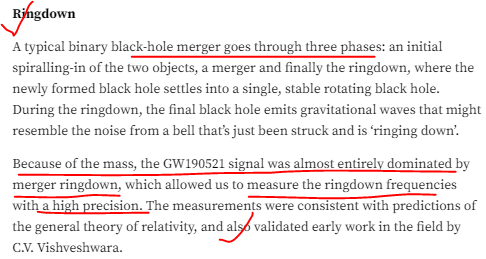 LIGO stands for Laser Interferometer Gravitational-wave Observatory. It consists of two detectors located in Washington and Louisiana, in the US. Virgo is a gravitational-wave observatory in the Cascina commune of Italy.

Before proceeding why, it is Himalayan Bunder, get a brief introduction about this Project. 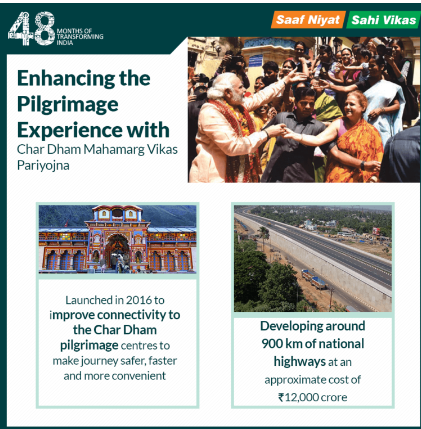 Char Dham All Weather Road Project is a two-lane expressway project currently being executed in Himalayan state Uttarakhand. The project proposes widening of single lane roads into double lane by up to 10 meters. The stated aim of the project is to improve the accessibility to Char Dham (shrines) namely Yamunotri, Gangotri, Badrinath and Kedar Nath. The project also proposes creation of 889 km long national highways to connect whole of Uttarakhand state. It has been divided into 7 packages comprising of 9 destinations including Tanakpur to Pithoragarh stretch. 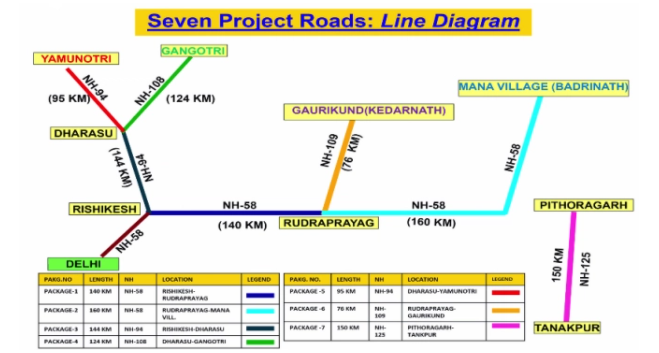 Uttarakhand, one of the most visited tourist destinations in the country, has four prominent pilgrim-destinations namely Yamunotri, Gangotri, Kedarnath, and Badrinath, collectively known as Char Dham, Nestled among the serene heights of the great Himalayas. These pilgrimage centers draw the maximum numbers of pilgrims each year, thus becoming the most important hubs of religious travel in the whole of Northern India. Traditionally, the pilgrimage begins from the West and ends in the East.  Thus, the Char Dham Yatra commences from Yamunotri, then proceeding to Gangotri and finally to Kedarnath and Badrinath.

These are considered the major centres of Hindu faith as It is believed that visiting these shrines helps to attain „moksha?. The importance of this yatra can be cited from the fact that tourist inflow has increased on year to year not just for the locals but for the foreigners too. Tourists are increasing every year.

Why it is Blunder?

The National Environment Policy 2006 envisages several measures to conserve mountain ecosystems. The proposals include appropriate land-use planning, watershed management, farming methods and promotion of eco-friendly and sustainable tourism. Perhaps most importantly, it advocates “best practice” norms for infrastructure construction in mountain regions to minimize or avoid damage to sensitive ecosystems and despoiling of mountain landscapes (Use this statement in every infrastructure projects anywhere, one marks extra). Char Dham Projects, as per the author is against this principle.

The Char Dham project goes against just such an environmental outlook and ethos. Almost 50,000 trees are to be felled for the Char Dham project. These include slow-growing, high-altitude trees like deodar (Himalayan cedar), birch and oak. Two experts of the committee formed by the Supreme Court have also submitted a critical rejoinder on the Char Dham Project and defined this road construction work as an act of irresponsibility and disregard towards a highly fragile ecology.

Also, you can add that, realizing the nuances of Himalayan ecology, the mission document on sustaining the Himalayan ecosystem, released by the Ministry of Science and Technology in June 2010, highlights that the concerned state governments should consider promulgating, as soon as possible, the following guidelines for road construction in hilly areas:

It’s a debate of Development versus Sustainable Development. Let’s see what happens. Don’t get emotional while reading such article. You are an aspirant, think practically.

For analyzing and much detail study, read Daily news section of last two days, in which we have given link of important news article. Here just basic few points you read.

India’s economy contracted by a whopping 23.9% in the first quarter of the 2021 financial year, in what is the latest sign of the toll that the COVID-19 lockdown has taken on economic activity. According to data released by the statistics ministry on Monday evening, real GDP for the April-June 2021 quarter fell by 23.9% in comparison to the same quarter a year ago.

Though agriculture output grew by 3.4% in Q1, it was hardly enough to make up for the devastation in services (-27%) and manufacturing (-39.3%) sectors. Within services, construction is a large component which is also employment-intensive, and this showed a 50% decline. 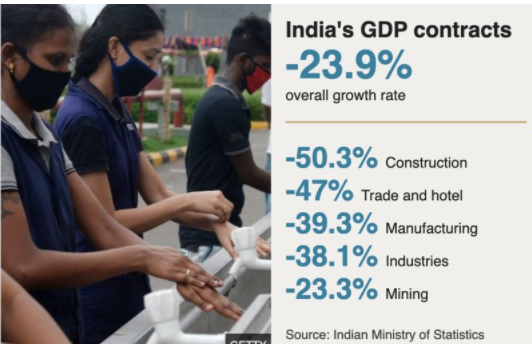 India has become the worst performing economy among the G20 nations in April to June quarter. 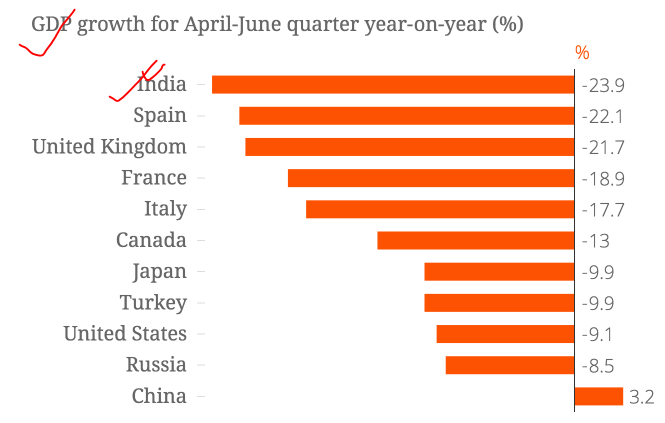 Why is India impacted far more than other G20 countries? Economists say,

Any good results can be expected in future? According to economists:

Thus, there are long-term factors which make India’s situation worse than that of other major economies. Even if one accepts the official data, the Indian economy is in depression and not just recession. It will take a long time to get out of it – till expectations change. For that, the government needs to change its stance from cautious to bold.

The chief economic advisor in the finance ministry has argued that some of the high frequency indicators for August show a possible V-shaped recovery. But he is still not sure whether India will have a positive GDP growth for the next two quarters. This is worrisome. 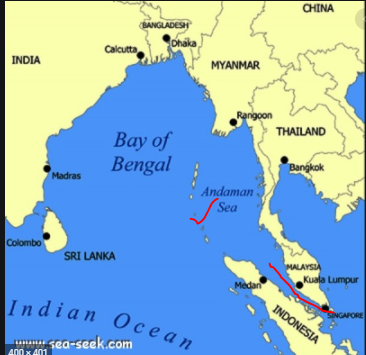 Recently, India has withdrawn from the Kavkaz-2020 multinational exercise in Russia due to the restrictions posed by the pandemic.