The Global Innovation Index 2020: Who Will Finance Innovation? is the result of a collaboration between Cornell University, INSEAD, and the World Intellectual Property Organization (WIPO) as co-publishers, and their Knowledge Partners.

Switzerland is the world’s most-innovative economy followed by Sweden, the United States of America (U.S.), the United Kingdom (U.K.) and the Netherlands, according to the GII 2020. 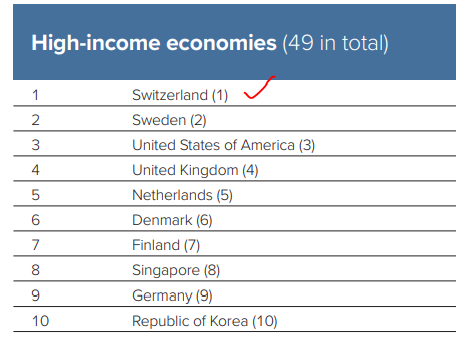 India has embarked on a journey towards creating an enabling environment by putting in place an ecosystem that breeds innovation. The Government of India has launched several significant initiatives for propelling innovation, such as the Start-up India initiative, Accelerating Growth of New India’s Innovations (AGNIi), Atal Tinkering Labs, new intellectual property rights (IPR) policy, Smart City Mission, Uchchatar Avishkaar Yojana, etc. All these initiatives, coupled with phenomenal research and innovation from the institutions, industry, and society, are cementing India’s position as an innovation and knowledge hub.

India has been categorized in Low -middle income countries. 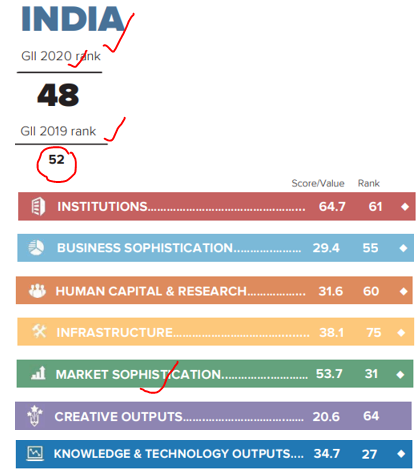 The National Health Authority (NHA) released the Draft National Health Data Management Policy on 26 August 2020 for comments and feedback from the public. It is available for comments till 03 September 2020.  We don’t know when action will be taken, and final policy will be formulated. Just few important points to remember for now. Detail can only be shared after final draft.

It all started with….

While addressing the nation on the 74th Independence Day of India, 2020 Prime Minister Narendra Modi launched the National Digital Health Mission (NDHM) under which a digital health ID would be created for all Indians. As per the stated objective, the health ID would work like a health account, containing details of every test, every disease, doctors visited, medicines taken, and diagnosis, he said. The ID card would be linked to the Aadhar or mobile number.

So, what is National Health Authority (NHA)

The National Health Authority (NHA) is the apex agency of the Government of India responsible for the design, roll- out, implementation and management of Ayushman Bharat- Pradhan Mantri Jan Arogya Yojana (AB PM-JAY) and the National Digital Health Mission across the country. NHA functions as an attached office of the Ministry of Health and Family welfare and is governed by a Governing Board chaired by the Union Minister of Health & Family Welfare

NDHM is a project of the Government of India which emanates from the National Health Policy of 2017 that proposed to digitize the entire healthcare system of India to overcome inefficiencies. Under this mission, the government also intends to put all health-related information of an individual at one place in addition to other objectives. As per the stated objectives, instead of restricting the health records of a person to just the health facility where they undergo treatment, electronic health records of individuals can now be accessed from anywhere in the country digitally. Additionally, a repository for doctors and health facilities will also be available in the scheme of things. 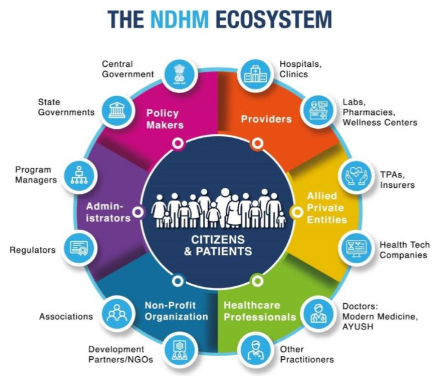 The draft policy talks about collection, processing, and management of health information under NDHM

To achieve the stated objectives, confidential health data will be collected from individuals across the country and stored at multiple levels- Central, State/Union Territory, and at the health facility level. To ensure that the data is protected, and privacy is maintained, the government has formulated the draft health data management policy which lays down guidelines on how to collect, maintain, process, and utilize the information of patients collected under NDHM for the health IDs.

The policy permits hospitals, diagnostic centres, and other entities, known as data fiduciaries, to collect personal or sensitive personal data as specified in the policy. Sensitive personal data, among others, include a person’s physical, physiological, and mental health data, financial information such as bank account or card details, sex life, sexual orientation, medical records and history, biometric data, and genetic data.

Enrolment in the mission is voluntary and consent is must

According to the draft policy, those who opt to avail the health ID card, also referred to as data principals in the document, are given the complete control and decision-making power over how their personal data is collected and processed. Any personal data or sensitive personal data can be collected only after the consent of the individual. Individuals also have the right to revoke the consent or restrict sharing of any personal data at any time.

Data Protection Officer should be appointed for individuals

Those institutions with access to the data under NDHM must have a designated Data Protection Officer (DPO) whose details should be put up on the website. Individuals who have queries must be able to approach the DPO.

The data fiduciaries are expected to formulate and implement a ‘personal data breach management mechanism’ to make sure that any instances of violation or non-compliance, including unauthorized or accidental disclosure, sharing, alteration, destruction or use of personal data get promptly reported to the NHA and other relevant entities. NHA should formulate and implement procedures to ‘identify, track, review and investigate’ such incidents and maintain a record of these instances along with the action taken.

The draft policy has been criticized by multiple sections. While some feel that the policy is about more about data than about health, others feel that this could be a step towards greater privatization of health care. We will wait for new updates.

We have connected dots from beginning till end. It will be easy to understand. Read. 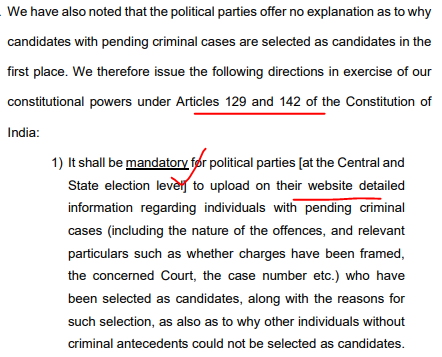 Even Election Commission is ready to implement the decision of SC: SEE BELOW.

Something important we need to know:

In Union of India Vs Association for Democratic Reforms and another; with People’s Union for Civil Liberties v. Union of India and another, the Supreme Court in 2002 held that the citizens have a right to know about public functionaries. The court maintained that ‘right to know’ contesting candidate’s antecedents was a fundamental right guaranteed under Article 19 (1)(a) since such rights include the right to hold opinions and acquire information for citizens to be adequately informed in order to form those opinions.

Later in March 2003, in People’s Union for Civil Liberties v. Union of India and another, Section 33B was found to be problematic on several grounds. It was struck down.

Finally, in Resurgence v. ECI, the SC stated that if an affidavit is filed with blank particulars, it renders the entire exercise of filing affidavits futile, and infringes the fundamental rights of citizens under Article 19 (1). The Returning Officer should remind the candidate to fill the blanks. Yet, if the blanks are left unattended, the nomination is fit to be rejected.

Again, Directions given by SC in 2018 to promote transparency and flow of information.

In Public Interest Foundation v. Union of India, while dealing with disqualification under section 8, the SC gave directives:

Political parties must publish on their website detailed information regarding pending criminal cases of their candidates (nature of offence, whether charges have been framed, concerned Court, case number, etc.) along with reasons for selection, and also why other candidates without criminal antecedents were not selected. The reasons to be given must be based on qualifications, achievements, and merit of candidate, and not mere ‘winnability’ at the polls.

To summarize, since 2002, candidates have been obliged to submit the details of the pending criminal records to the ECI. The SC’s judgement in 2018 made it mandatory for these details to be published in the concerned political party website and in newspapers and television channels. This has been further extended in the 2020 judgement. Strict implementation is need of the hour.

The Supreme Court has allowed telecom companies 10 years’ time to pay their adjusted gross revenue (AGR) dues to the government. You read below document or not, but watch this small video to understand everything.

An October 2019 judgment of the court in the AGR issue originally wanted the Telco’s to make the repayments in three months. The court had concluded that the private telecom sector had long reaped the fruits of the Centre’s liberalized mode of payment by revenue sharing regime. Below is the image of 2019 judgement: 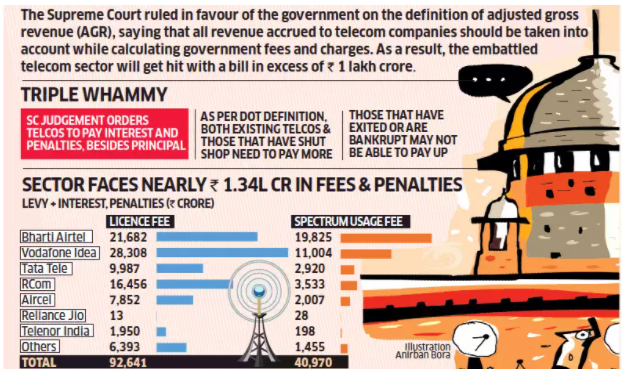 Later, the government had proposed in court a 20-year “formula” for Telcom’s to make staggered payments of the dues. But the court observed that the period of 20 years fixed for payment is excessive. Even after part payment, the dues still run to ?1.43 lakh crore.

AGR is a fee-sharing mechanism between government and the telcos who shifted to 'revenue-sharing fee' model in 1999, from the 'fixed license fee' model. In this course, telcos are supposed to share a percentage of AGR with the government. 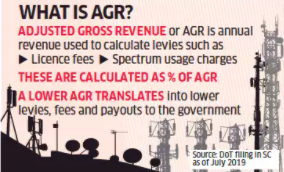 How is it calculated?

As per DoT, the charges are calculated based on all revenues earned by a telco – including non-telecom related sources such as deposit interests and asset sales.

What are issues associated? When it all began?

Few important points only we have covered:

Construction of Kalasa-Banduri canals over Mahadayi/Mandovi River has been a point of contention between the Goa and Karnataka governments.

The Kalasa-Banduri Project undertaken by the Karnataka government proposes to divert Mandovi river water from Kalasa and Banduri canals into the Malaprabha river in the state to facilitate drinking water to 13 towns of Dharwad, Belagavi, Bagalkote and Gadag.

The entire project aims to construct a total of 11 dams on the river Mandovi. The diversion of water from Kalasa and Banduri nullahs, however, has been the point of contention between Karnataka and Goa, with the latter claiming it would strip the state of its flora and fauna. 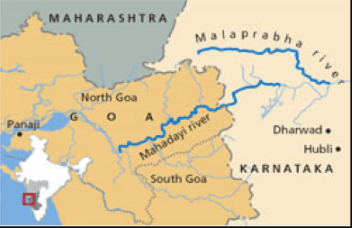 Mahadayi or Mhadei, the west-flowing river, originates in Bhimgad Wildlife Sanctuary (Western Ghats), Belagavi district of Karnataka. The Mandovi river basin falls into the states of Goa, Karnataka and Maharashtra. The river is 81 kilometres (km) in length; 35 km of which flows in Karnataka, 1 km in Maharashtra and 45 km in Goa.

The Mahadayi Water Dispute Tribunal was set up in 2010 to look into the issue. It delivered its judgement in 2018, but the dispute still exists.