All-important data will be covered below. Don’t read beyond this.

The index is released annually by World Economic Forum. 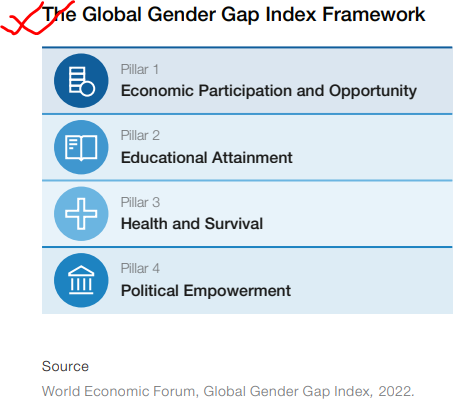 It is the longest-standing index which tracks progress towards closing these gaps over time since its inception in 2006. 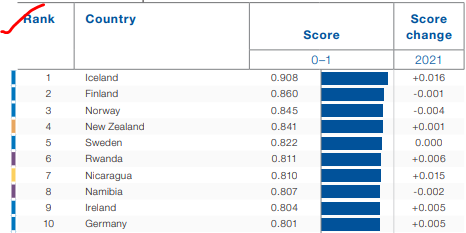 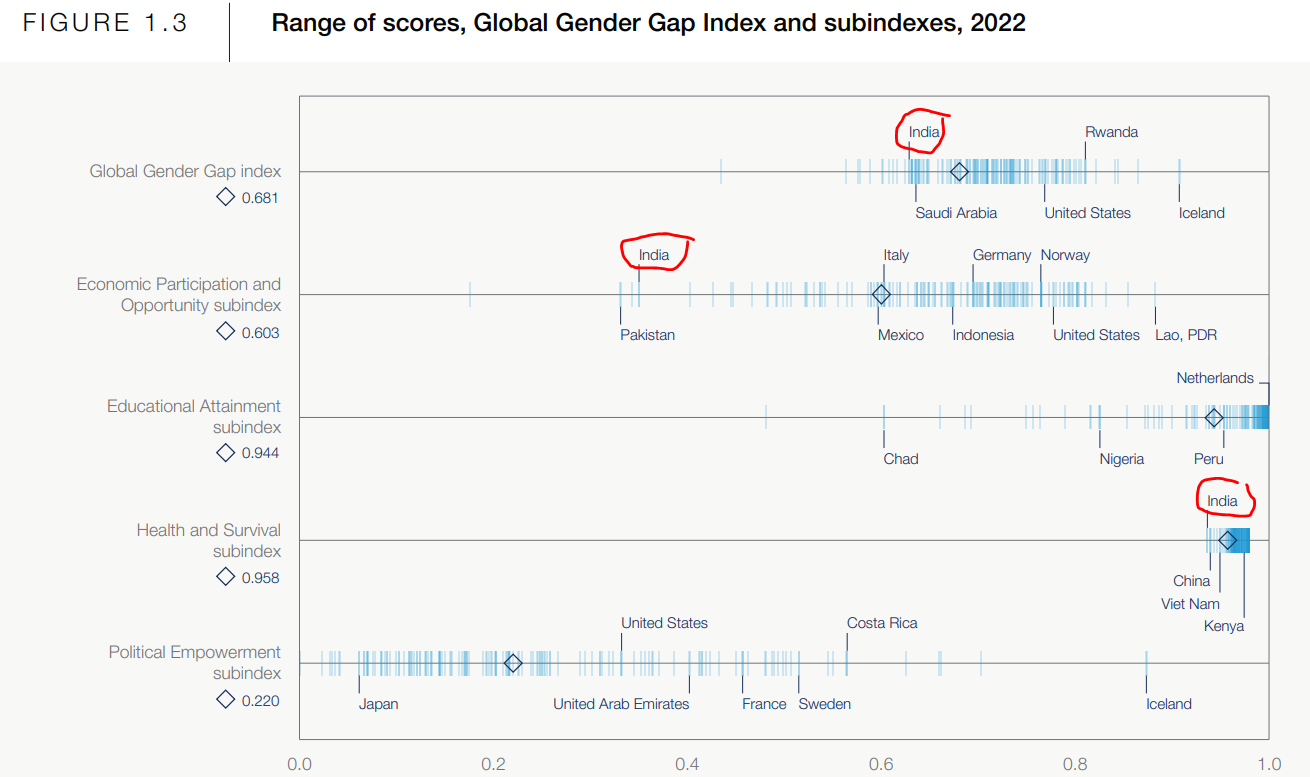 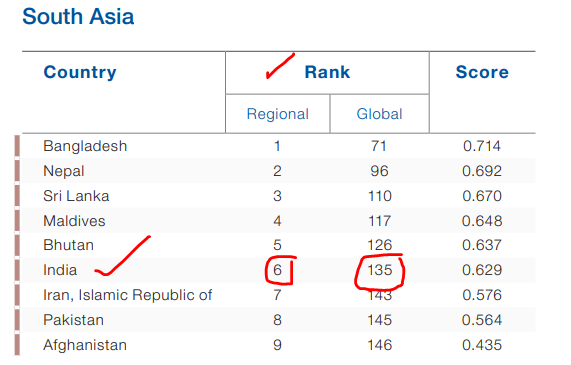 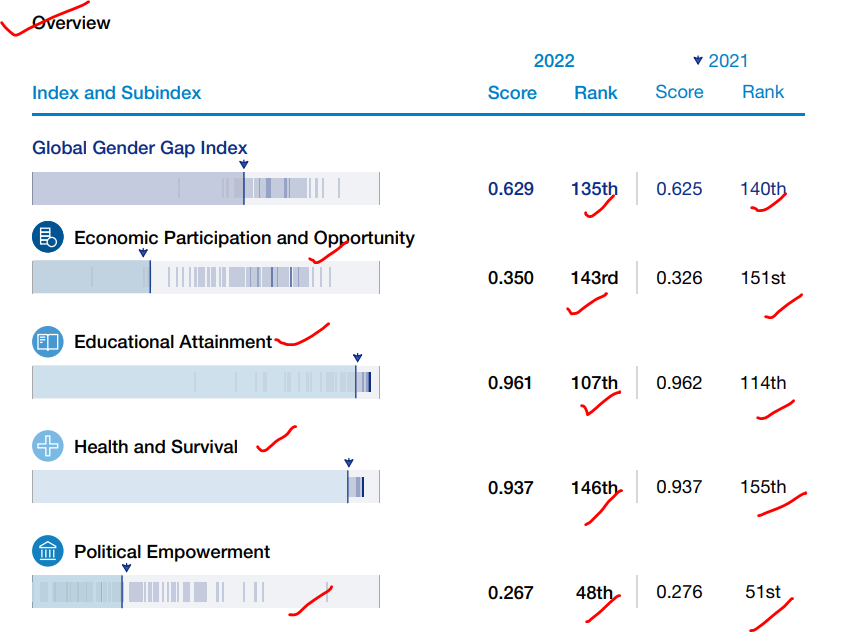 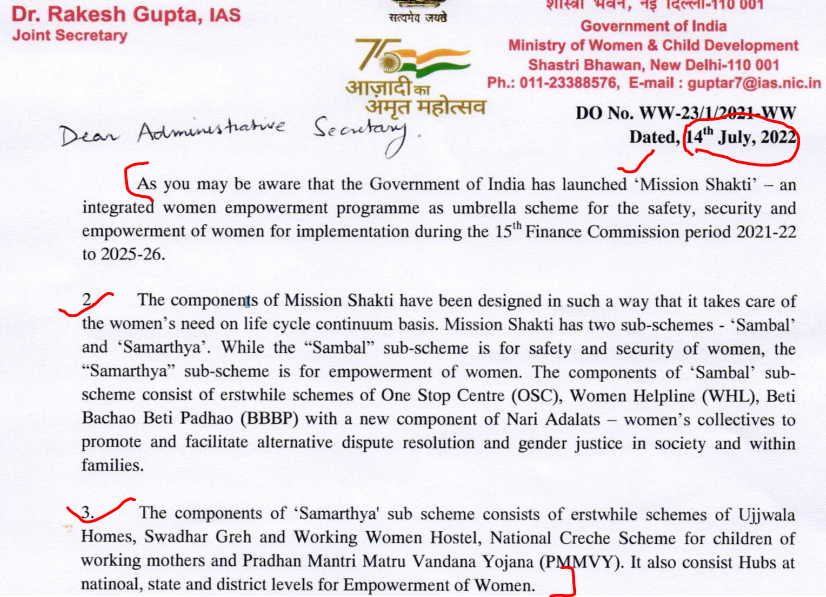 The objective of the Mission Shakti is to provide to all women and girls including differently-abled, socially and economically marginalized and vulnerable groups, in need of care and protection, with short term and long-term services and information for their holistic development and empowerment. 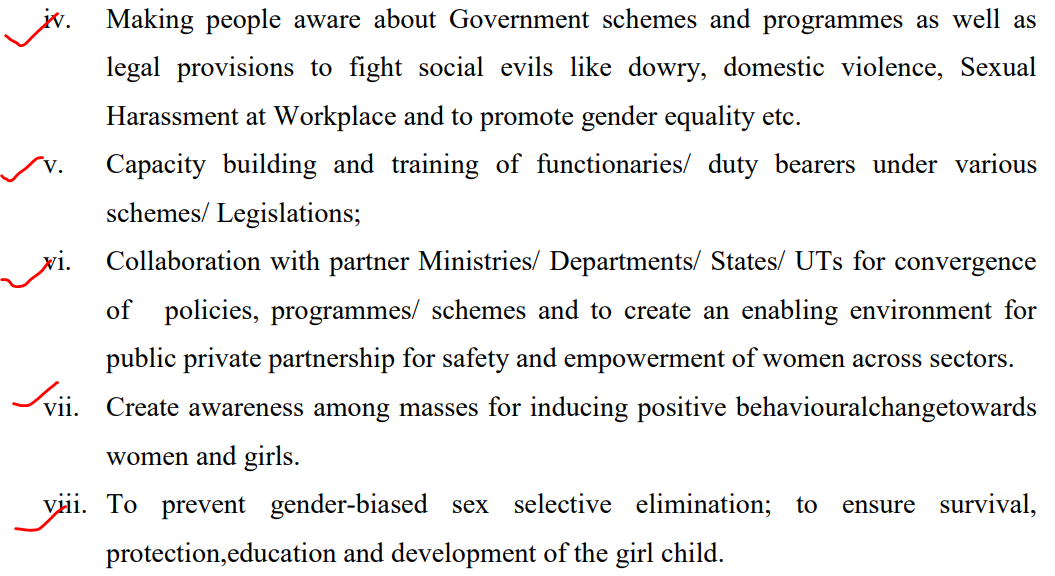 A committee headed by the Secretary, Ministry of Women and Child Development with will be the Apex Committee to review implementation of the Scheme at regular intervals with the State Governments/UT administrations and to monitor quality norms (for both infrastructure as well as services provided under the scheme) as laid down in the guidelines.

The members of the Committee are as under;

The overall implementation of the Scheme at State/UT level will be done by a Committee headed by the Chief Secretary. The committee will be serviced by the Department of Women and Child Development/ Social Welfare Department of concerned States/ UTs.

The overall implementation of the Scheme at District level will be done by a committee headed by District Magistrate/ District Collector. The committee will be serviced by officers in charge of the Women and Child Development department (DPO/DWEO/DCPO etc).

DoLR has financially supported 6382 watershed projects in States/UTs with a target of 29.57 million ha under WDC-PMKSY 1.0 which has successfully been concluded in March 2022. Completion reports and End-line reports of projects are being received in DoLR and the outcomes reported are incredible:

So far 5693 projects have been reported as completed by States/UTs covering an area of 27.10 million ha. Meanwhile DoLR has, during December, 2021, also rolled out WDC-PMKSY 2.0. As it was imperative on the part of the Department, with the help of National Rainfed Area Authority (NRAA), DoLR revised the existing Guidelines to make it more inclusive, scientific and explicitly production systems oriented.

Under WDC-PMKSY 2.0, Springshed development has been incorporated as a new activity within the project areas of watershed. It was on the basis of recommendation of NITI Aayog which in collaboration with ICIMOD published a report in 2017-18 showing almost 50% of 4-5 million springs in India are either dried up or are on the verge of drying up.

WDC-PMKSY 2.0 is also important because the Springshed development has been incorporated as one of the new activities. This could be of paramount importance especially for the Himalayan States/UTs and other mountainous regions of the country which are strategically, ecologically, economically socio-politically are of high significance. Ironically, the Himalayan States/UTs receive plenty of rains during the monsoon season but during lean period they face stark problem of paucity of drinking water. Conversely, the fragile Himalayan landscape also encounters ecological degradation and landslide problems very frequently. By rejuvenating springs in mountainous regions under the project areas of WDC-PMKSY 2.0, all States/UTs could immensely be benefitted.

DoLR has taken a lead to capitalize on the potential of WDC-PMKSY 2.0 and contribute substantially towards doubling of farmers’ income, Nationally Determined Contributions, Land Degradation Neutrality and Sustainable Development Goals etc.—thus transforming India.

The latest Company Law Committee Report(CLC Report)of 2022 has proposed various significant amendments to the existing framework of the Companies Act, 2013 and some in the Limited Liability Partnership Act, 2008 ("LLP Act").

The Company Law Committee has been constituted by the Ministry of Corporate Affairs (MCA) and entrusted with responsibilities including promotion of greater ease of doing business for law-abiding corporates and improving the operational efficiency of the Companies Act, 2013 and Limited Liability Partnership Act,2008 ("LLP Act, 2008").

The recent CLC report aims to overhaul the existing framework, recognize as well as introduce new concepts (such as fractional shares), improve ease of doing business and address certain intricacies present in the existing provisions of the Companies Act, 2013.

Section 4 of the Companies Act 2013 currently limit the issuing and holding of fractional shares. A fractional share is a fraction of a share that is less than one unit. Fractional shares can result from business acts such as mergers, issue of bonuses, or rights issues.

According to the Companies Act, the Union Government has the authority to establish the National Financial Reporting Authority to handle issues pertaining to corporate accounting and auditing standards. The NFRA works to safeguard the public interest as well as the interests of creditors, investors, and other parties connected to the companies or other corporate entities. While taking note of the NFRA-related legislation, CLC has suggested that by enforcing penalties against auditors, creating a specific NFRA fund, and establishing regulations, NFRA's operational autonomy can be increased.

The NFRA does not have the authority to take appropriate action against a member or company in cases of professional or other misconduct as defined in the first and second schedule of the Chartered Accountants Act (CA),1949, in accordance with the provisions of section 132. The only authority NFRA has is to look into any member's or firm of chartered accountants' misconduct that is registered under the CA Act of 1949. If any misconduct is established, the NFRA has the authority to penalise a member or firm or to prevent them from being selected as the company's auditor.

As a result, the CLC has suggested that the NFRA be given the authority to enforce compliance with the Companies Act and its related regulations. If its orders are not followed or an appeal has not been filed against one of its orders with the NCLAT, it shall also be able to take the proper punitive measures.

Amendments In Section 132 – Having A Dedicated Constitution Of NFRA Fund

At the present time, the Union Government provides the NFRA with all of its funds. These funds are used for (a) the Chairperson, Members, and other officials and staff of NFRA's salaries, allowances, and other benefits; and (b) additional expenses related to the NFRA's functions and objectives. Regulatory agencies like NFRA need the required competencies to carry out their duties due to their specialised nature.

Now, the CLC has recommended that NFRA include the same financial autonomy clauses that apply to other regulatory organisations. Thus, the CLC has advised that necessary amendments be made to the Companies Act in order to establish an NFRA Fund, in accordance with the "Board Fund" under the Insolvency and Bankruptcy Code ("IBC") and "Competition Fund" under the Competition Act.

The NFRA is not allowed to independently create any regulations under the current norms. The CLC recommends granting NFRA the authority to enact some regulations - a) the format and method of filing information with NFRA and b) the place, time, and protocol for NFRA meetings. The Committee further recommends giving the NFRA chairman, the powers of general superintendence and direction within NFRA. The amendment seeks to improve the NFRA's internal operations; necessitating subject-matter expertise and immediate requirement for regulation.

Recommendation Of The Committee To Bring Clarity In Provisions

The committee came up with the proposal to incorporate new provisions in the Companies Act, 2013, for setting up of a risk management committee, as a separate committee on the board, after it has noted that risk management allows efficient working of every company.