A 27-year-old Muslim man was arrested for having married a 17-year-old girl. The girl was found to be pregnant when she had come for a medical check-up at a primary health centre. The sub-inspector of the police lodged a complaint against the petitioner since the girl was a minor. He was booked under the Prohibition of Child Marriage Act, 2006 and POCSO Act. In Aleem Pasha vs. State and another, the petitioner appealed for bail on grounds that under Mohammedan Law, puberty is considered for marriage and normal puberty age is treated as 15 years and so there was no offence of child marriage committed since the girl had attained puberty.

However, the High Court Bench of Justice Rajendra Badamikar dismissed the arguments stating that the POCSO Act is a Special Act and that it overrides personal law. As per POCSO Act, the age for involving in sexual activities is 18 years. At the same time, the Court noted that the victim was aged 17 years and was capable of understanding things. Since the victim did not raise any objections, it was evident that she was consenting though under the influence of her parents. The bail was granted provided he would not tamper with the prosecution witnesses.

What is the Middle East Green Initiative (MGI)?

The MGI is a first-of-its-kind regional alliance.

MGI provides ambitious and clearly defined roadmap for regional climate action, ensuring a coordinated and localized response to the specific way climate change is impacting countries in the region.

What are the aims of the Middle East Green Initiative (MGI)?

MGI has provided an ambitious and clearly defined roadmap for regional climate action. MGI will deliver the largest reforestation program in the world as well as significantly contribute to achieving the emissions reduction targets under the Paris Agreement.

Actions taken under the MGI umbrella will not only positively impact the environment, but will spur economic diversification, job creation, and private sector investment.

Don’t need to know much.

Cabinet Approves “Guidelines for Uplinking and Downlinking of Satellite Television Channels in India, 2022”

The main advantages emanating from the revised guidelines are as follows: -

Ease of compliance for the permission holder

What is the requirement for public service broadcasting?

It is obligatory under the guidelines for all TV channels, including private channels, to “undertake public service broadcasting for a minimum period of 30 minutes in a day on themes of national importance and of social relevance”.

While the guidelines are already in force, Ministry officials said the channels will be given some time to conceptualise and create such content. The Ministry will soon issue a specific advisory on the date it comes into effect, and on the time slots for the telecast of this content, the officials said.

What is the rationale behind this?

The government has argued that since “airwaves/ frequencies are public property” they “need to be used in the best interest of the society”. Representatives of several broadcasters, speaking on condition of anonymity, however, pointed out that while airwaves may be public property, they had paid hefty fees for their use — any binding guidelines that adversely impact their commercial interests may not, therefore, be fair.

What is the definition of national interest for this purpose?

The guidelines have identified eight “themes of national importance and of social relevance”: “education and spread of literacy; agriculture and rural development; health and family welfare; science and technology; welfare of women; welfare of the weaker sections of the society; protection of environment and of cultural heritage; and national integration”.

How will compliance be ensured?

Once the guidelines are implemented, the Ministry will monitor the channels for the broadcast of this content. In case non-compliance is observed in the Ministry’s view, an explanation will be sought. If a channel continues to be non-compliant, more steps can be taken based on specific advisories that will be issued from time to time, and on a case-to-case basis.

The Central Government may, from time to time, issue general advisory to the channels for telecast of content in national interest, and the channel shall comply with the same,” the guidelines say.

The government has finally designated the National Dairy Development Board (NDDB) as the implementing agency for the establishment of 100 fodder-centric Farmer Producer Organizations (FPOs)in the current fiscal year to address the country's fodder deficit.

Understand first what is Producer Organization: 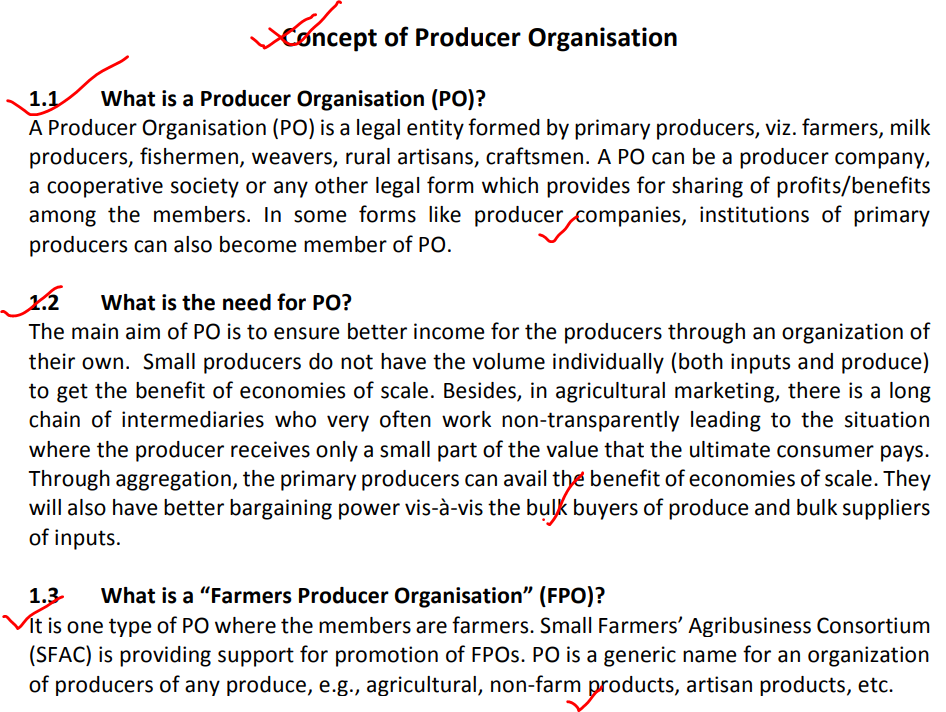 What is fodder-centric Farmer Producer Organisations?

Ministry of Fisheries, Animal Husbandry and Dairying proposed the setting up of fodder-centric FPOs in 2020 to address the fodder deficit situation in India. It requested the Union Agriculture Ministry to permit the establishment of fodder-centric FPOs under the central scheme “Formation and Promotion of 10,000 new FPOs”.

National Dairy Development Board (NDDB) has been designated as the implementing agency for this scheme.

Why is this scheme needed?

The idea of setting up fodder-centric FPOs was first mooted by the Ministry of Fisheries, Animal Husbandry and Dairying in 2020, with the aim to address the fodder deficit situation in the country.

The Wholesale Price Index-based fodder inflation has surged to a nine-year high of 25.5 per cent in August this year. The prices of dry fodder have remained high in 2022 when compared with the previous year’s prices. This has adversely affected the lives of rural families whose livelihoods rely on livestock sector.

Currently, fodder deficit in India is 12 to 15 per cent for green fodder, 25-26 percent for dry fodder and 36 per cent for concentrated fodder. The deficit is caused by seasonal and regional factors.