Two coastal villages in Odisha have been declared the first two ‘Tsunami Ready’ villages in the Indian Ocean Region. The recognition was given by the Intergovernmental Oceanographic Commission (IOC) of UNESCO for the preparedness of the local community in two villages – Noliasahi in Jagatsinghpur district and Venkatraipur in Ganjam district – against tsunamis.

Collectively, the Tsunami Ready certification checklist aims to improve tsunami preparedness in coastal communities, to minimize the loss of life and property, and to ensure a structural and systematic approach to building community preparedness. 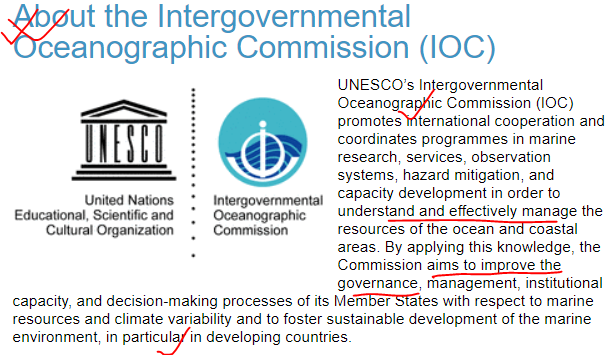 IOC also coordinates and fosters the establishment of regional intergovernmental coordinating tsunami warning and mitigation systems in the Pacific and Indian Oceans, in the North East Atlantic, Mediterranean and Caribbean seas.

The Tsunami Ready Programme is a key contribution by UNESCO’s IOC to the United Nations Decade of Ocean Science for Sustainable Development, set to officially begin on 1 January 2021, and which aims to build capacities of countries, communities and citizens to reduce and appropriately respond to the risk posed by tsunamis and other ocean-related hazards.

New partnership between UNEP and ReNew Power to increase access to clean, efficient energy in India

The strengthened partnership between the two parties – who signed the Memorandum of Understanding (MoU) on 10th July 2020 in Delhi- focuses on enhancing access to renewable energy and improving energy efficiency as part of the progressive strategies that India has adopted to realize its Nationally Determined Contributions (NDC) under the Paris Agreement.

ReNew Power will partner with UNEP’s District Energy in Cities Initiative as an implementation partner for renewable energy installations across India with the aim of shifting the heating and cooling sector to an energy efficient one. The partnership will also implement solar off-grid projects, studies, and assessments. Joint efforts will be promoted through annual events to showcase contributions to India’s strategic vision on renewable energy.

Renewable sources constitute about 23.6% of total installed capacity in India. The country had a target of 175 GW of renewables capacity by 2022, and at the UN Climate Action Summit in September 2019, the Prime Minister announced an increase in the target to 450 GW. See the data of Renewable: 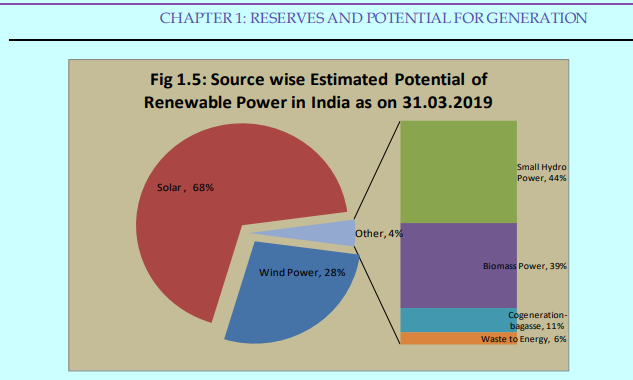 About District Energy in Cities Initiative

District Energy in Cities Initiative (led by UNEP) aims to support market transformation efforts in order to shift the heating and cooling sector to energy efficient and renewable energy solutions. The initiative supports local and national governments to build local know-how and implement enabling policies to accelerate investment in modern – low-carbon and climate resilient – district energy systems. India is a part of this Initiative. The Initiative has partnered with Energy Efficiency Services Limited (EESL) as the national coordinator of the Initiative in India. Currently, six cities of India are involved under this initiative: Amaravati, Bhopal, Coimbatore, Pune, Rajkot, Thane (Pilot)

Africa has been declared free from wild polio by the independent body, the Africa Regional Certification Commission. This marks the eradication of the second virus from the face of the continent since smallpox 40 years ago. The last case of wild poliovirus in the region was detected in 2016 in Nigeria. 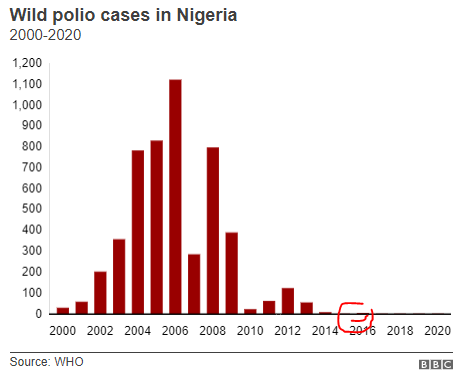 WPV3 is the second strain of the poliovirus to be wiped out (2019), following the certification of the eradication of WPV2 in 2015.  WPV1 is still present in Pakistan and Afghanistan. 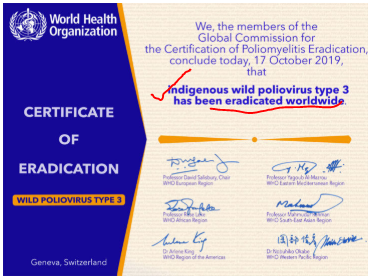 Road ahead: To protect global progress against polio, we must continue to vaccinate to maintain high population protection against the virus and to prevent polio from traveling to other countries from the two countries (Pakistan and Afghanistan) where wild poliovirus type 1 transmission has not been interrupted. In Africa, we also must continue to innovate, engage communities and work quickly to stop outbreaks of circulating vaccine derived poliovirus type 2 wherever they occur. Some vaccine derived poliovirus type 2 was observed still in Africa. See below: 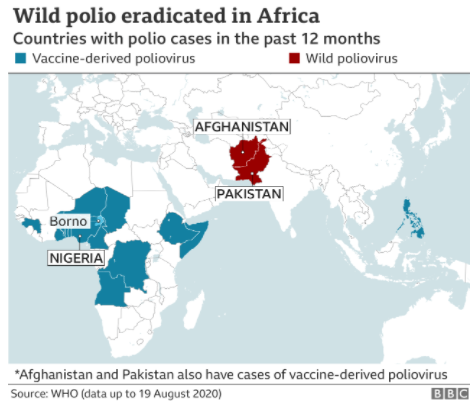 About Polio: Polio is caused by Polio Virus type 1,2,3 single stranded RNA virus (Natural or Wild Polio Virus). There are three serotypes of poliovirus, each of which causes poliomyelitis, an infectious disease which mostly affect under-5 children.

Polio is a highly infectious disease caused by a virus. It invades the nervous system and can cause total paralysis in a matter of hours. The virus enters the body through the mouth and multiplies in the intestine. Initial symptoms are fever, fatigue, headache, vomiting, stiffness in the neck and pain in the limbs. One in 200 infections leads to irreversible paralysis (usually in the legs). Among those paralyzed, 5% to 10% die when their breathing muscles become immobilized.

India, where polio was paralyzing 500 to 1,000 children per day in the 1990s, eliminated the disease in 2014. In 2014, India was officially declared polio-free, along with the rest of the South-East Asia Region. 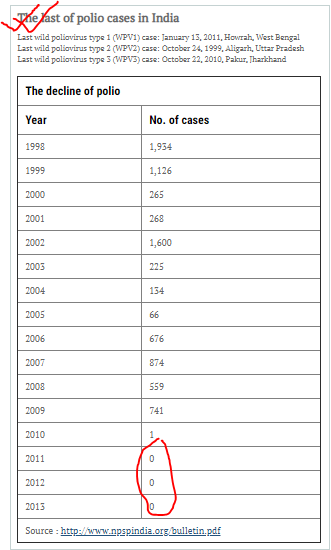 Formation of a star from dwarf galaxy

A team of Indian astronomers from Aryabhata Research Institute of Observational Sciences (ARIES) have claimed to trace the mystery behind dwarf galaxy aberrations of massive star formation. ARIES is an autonomous institute of Department of Science & Technology (DST).

Reasons Found Out by the Aries Astronomers: 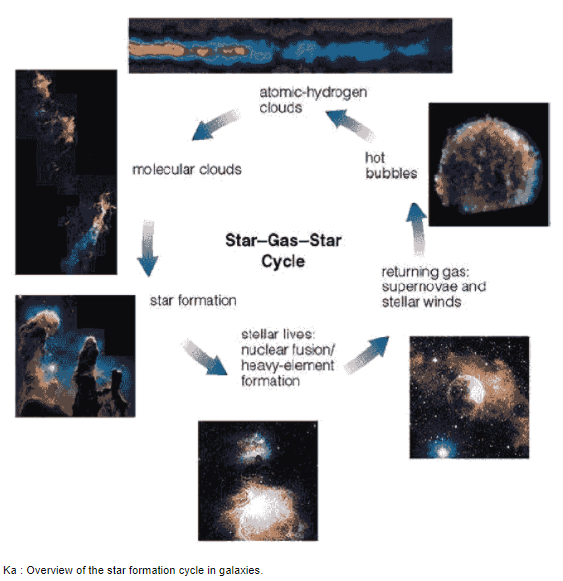 According to SEBI data, the value of participatory note (P-note) investments in Indian capital markets increased to Rs. 63,288 crores till July 2020-end. This is the fourth consecutive monthly rise in investments through P-notes.

Participatory notes are instruments used by foreign funds and investors not registered with the SEBI to invest in Indian securities. They are generally issued overseas by associates of India based foreign brokerages (FPIs) and domestic institutional investors. Technically, P-Notes are Offshore Derivative Instruments (ODIs) issued by FPIs and their subaccounts against underlying Indian securities (like shares).

Regulation 15A of SEBI Regulations, 1995 defines ODI as an instrument “which is issued overseas by a foreign institutional investor (FII) against securities held by it that are listed or proposed to be listed on any recognised stock exchange in India.” These ODIs can also be issued against derivatives, resulting in leveraged exposure to the Indian stock market

What are govt & regulator’s concerns?

What has Sebi done to regulate P-Notes?  Sebi has taken a number of steps to tighten rules on P-Notes. Just for information. No need to learn.